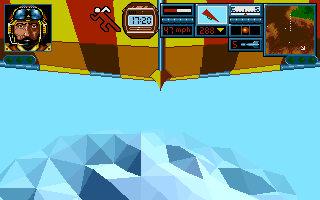 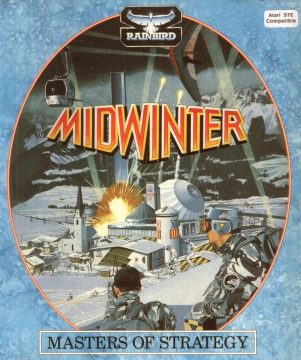 One of the most interesting of the 1990s and early 2000s is the PC first-person action RPG. Games like Ultima Underworld and System Shock combined cutting edge (for their time) graphics, complex mechanics and open-ended gameplay to create an immersive experience while later titles like System Shock 2 and Deus Ex improved the action mechanics by incorporating the elements of first-person shooters. While they may seem clunky and hard to play nowadays, the time spent getting used to their quirks is rewarding as their design often outclasses the more streamlined games that would dominate the market in the 21st century.

Midwinter, first released in 1989, can be seen as an early example of the genre with the characters’ skills affecting their effectiveness at performing different actions (e.g. sniping skill affecting how steady the character’s aim will be when the player attempts to shoot down enemy vehicles), health system based around mostly independent body parts that further affects the game’s action sequences, the need to manage hunger and exhaustion and the ability to control different vehicles. It’s an incredibly forward-thinking game, although it is difficult to control and unpolished even for the genre’s standards.

Midwinter is also a game by late Mike Singleton and as such contains many elements characteristic to his creative output. Such “singletonisms” include placing the game’s action elements inside the framework of a turn-based strategy game in which the initial party (here consisting only of a single character) has to recruit allies (with personalities and backstories of different characters determining who can be recruited by whom) and the plot about a small group of heroes having to defend themselves from the enemy’s overwhelming forces – things which no doubt will sound familiar to anyone who played games from Lords of Midnight series. Unfortunately, the game also features an awkward control scheme which would plague Singleton’s 1990s titles like Lords of Midnight: The Citadel or The Ring Cycle: in all those games, player’s movement is controlled completely with a mouse – the characters move automatically and their speed is increased or decreased by moving mouse forwards or backwards. 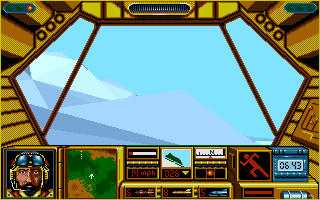 Midwinter, like Lords of Midnight, has a fairly involved backstory detailed in the manual. Eponymous Midwinter is an island which formed near the coast of Portugal after ocean levels receded during an impact winter that followed after a cataclysmic meteorite impact. Politically, Midwinter is less of a country and more of a loose alliance of independent settlements, with a common volunteer militia called FVPF (Free Villages Peace Force) working to defend the island. When the game begins, an FVPF officer John Stark spots an invading army and decides to mount a resistance force which will keep the attackers at bay through guerrilla warfare.

General Masters, the enemy leader, strives to capture the island’s ‘heatmines’ which extract geothermal energy. When all the heatmines are captured, the game is over. While it’s possible to slow down the army’s progress by destroying convoys and sabotaging factories, the only real way to win is by destroying Masters’ headquarters in the area called Shining Hollow in the northeastern part of the map. Like in The Lords of Midnight, doing so might be easier if you recruit a force strong enough to stall the enemy’s progress.

When the game begins, Stark is placed randomly somewhere on the map, with an enemy vehicle nearby. At this point, he’s equipped with a pair of skis used for transportation (they’re slow, using them takes a lot of stamina and they become hard to control while going down a steep hill but they don’t need fuel or repairs), a sniper riffle (which can’t be used while moving – the character needs to stop and assume prone position which given the weather might damage your health if done for too long) and a few hard to aim grenades. The game features a map that can be used to locate recruitable characters, points of interests and enemies which is necessary for planning your strategy.

In addition to recruitable characters, points of interest may contain different buildings: shops which allow you to acquire dynamite needed for sabotage, houses in which you can eat (to restore staminga) and sleep (to regain health), churches and bunkers which can be useful sniping positions (you’re much harder to hit there than in the open field), buildings captured by enemies which can be destroyed and a garage which allows you to acquire, repair and refuel land vehicles (they’re tricky to control and easy to crash but they can fire missiles while moving and allow for much quicker travel – although going over 45mph on an uneven terrain will usually lead to a disaster). In addition to those, it’s also possible to find cable cars that will safelt take you to the top of steep mountains. From there, it’s possible to travel by air on a hang glider – a tricky vehicle that only few characters can control reliably (the game even seems to simulate wind as staying on course at high altitudes is easier said than done) but also possibly the quickest way to reach Shining Hollow. 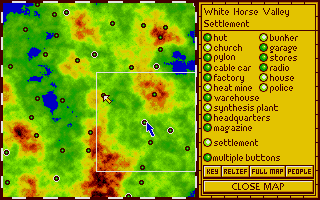 Midwinter is a hybrid turn-based real-time game. Each controlled character is given a two-hour turn, with action sequences taking place in accelerated real-time. In settlements, each action either takes a set amount of time (eating, sleeping) or lasts longer the less skilled your character is (repair, sabotage, first aid). Characters who get badly wounded, exhaust all stamina or fall into water will always get rescued and taken to the nearest settlement but if the damage is bad enough, they might need to take multiple turns to rest. It’s not possible to get killed, although moving fast is essential to victory so getting hurt too much near the beginning when the party is small might ruin your chances of victory.

Midwinter isn’t a good looking game, although it is a big technical achievement given its era. The 3D in action sequences consist of low-polygon untextured models placed infrequently on the mostly empty terrain. The draw distance and resolution are obviously poor, although the DOS version manages to keep a decent framerate. Destroying buildings is accompanied by a short cutscene of said building being blown up in some sort of black void and its model will be replaced with a model of ruins in action mode. 2D used for everything outside of action mode as well as character portraits is better, although it unfortunately consists only of static images.

There’s no music in any of the versions of Midwinter, although each has different sound effects for walking, vehicle engines, shooting, incoming missile and explosions. They’re probably the best on the Atari ST, with PC’s AdLib sounding the most realistic but also really annoying. Interestingly, it’s possible to use Roland sound cards on PC which renders sound effects with synthesized musical instrument – it’s strange, but the high pitched sound the enemy missiles make creates a very tense atmosphere. 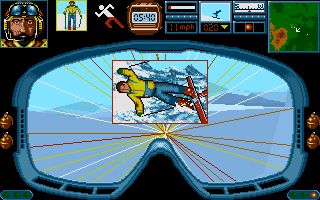 The empty terrain and minimal sound, despite their flaws, help the game build a cold, hostile atmosphere. This, combined with the high difficulty level of both action and strategy segments (moving around can be difficult, enemy missiles can injure characters and crash their vehicles and if you don’t act fast, the enemy will win in less than two in-game days) turn the world of Midwinter into an incredibly unfriendly place. As the game goes on, the player can almost feel what the characters are going through – the snow, the wounds, the lack of sleep. The protagonists are outnumbered and badly prepared and the world is as much of an enemy as the invaders are – and the game will keep reminding you of it with every turn.

Midwinter is an impressive, ambitious game. Its mixture of action and role-playing were far ahead of its time while its strategy elements make it stand out through the unusual (although typical for Mike Singleton) focus on recruitment and the fight against a much more powerful force. It’s a post-apocalyptic winter which manages to feel truly cold and dangerous despite (or maybe because) the limitations of systems it was designed for.

Unfortunately, Midwinter is also a game with bad controls (especially on PC when if you choose mouse-based movement, you can’t switch to keyboard without leaving the game – that makes some parts frustrating as while mouse is generally superior, attempting to use it to control a hang glider is simply infuriating), difficulty depending in no small part on luck (the further from Shining Hollow you begin, the harder it will be to get there before it’s too late, especially if you don’t spawn close to a garage) and graphics which often simply don’t look good. It is fun and rewarding once you learn how to avoid obstacles and dodge enemy fire but reaching that point requires many failures. While the more patient gamers will enjoy their time with Midwinter, many will find reading about it more engaging than playing it.