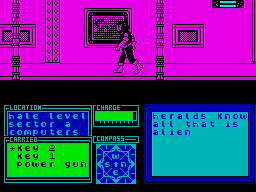 After two popular titles with a Celtic myth theme, Carter and Follis were ready for something new. Roy started all his coding from scratch and Greg started planning for an epic science fiction trilogy that would reinvent the Gargoyle adventure.

Marsport was intended to be the first in a trilogy called The Siege of Earth, which was to be followed by the sequels Fornax and Gath. According to Greg in various interviews, the series would have spanned centuries and shown humanity attempting to explore space, encountering aliens, and fleeing to Earth for an epic battle to save mankind. In preparation for Fornax, Greg and Roy evidently took artificial intelligence classes to incorporate cutting edge programming techniques. Unfortunately, these sequels never surfaced. While Marsport isn’t quite the stylistic rebirth they intended, Gargoyle did reinvent their acclaimed design style with varying degrees of success. 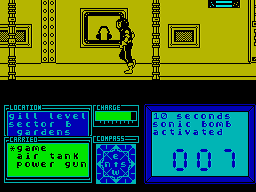 In 2494, Earth has been defending itself against the Sept race for decades. The Sept are only kept at bay by a giant forcefield that contains both the Earth and its moon. However, the forcefield is weakening and must be strengthened by the original plans, located deep below the surface of Mars in the Marsport base. Unfortunately, the complex is currently occupied by the Sept, and you, as Commander John Kepler Marsh of the Terran underground liberation organization HASP, must recover the plans from Marsport’s central computer.

As Marsh must fight the Sept, Marsport contains very light action elements. The very first puzzle in the game is to grab a gun permit, walk nearby, put the permit in a receptacle labeled key, and grab a gun from an adjacent shelf. Guns are the only defense against hundreds of fast moving enemies. They hold about thirty shots, after which they must be charged at specified stations. Thirty is more than enough ammo before reaching the next charging station, making everything straightforward shoot-em-up fair. It would have been interesting if Greg and Roy limited it to five or ten shots per charge; if they had done this, the game would have an almost survival horror level of intensity.

Instead, there’s hardly an element of surprise. The game always flashes an onscreen warning whenever enemies are present. Only one type of the game’s three enemies appear in each section.

Sept warriors are by far the most common. These humanoid insects prance up to the player with no inhibitions and kill upon contact. These are easily dispatched with a single blast. They re-spawn continuously and have a nasty habit of popping out around corners, so it’s best to take it slow when they’re in the area.

Wardens are robots that also kill the player on touch, though they move diagonally up and down and can only be killed at their lowest point of movement. Because of this, wardens are a greater challenge than other foes, requiring carefully timed crouching attacks to subdue.

Sept warlords are hulking beasts that never move, although they do require a large amount of firepower to destroy. Standing near one without attacking will quickly lead to the character’s death, although fifteen to twenty shots will quickly dispatch a warlord.

The objectives are clearly stated in the manual: locate Marsport’s main computer, recover the forcefield plans, and get out alive. However, the complex is huge, featuring many levels linked by elevators. These aren’t the kind of elevators that have nice floor select buttons; they drop Marsh off on whatever floor they want, and with ten floors, there’s a complex layered approach to mapping. Many of the elevators, similar to the tubes in Wizardry, are one-way, meaning long and elaborate backtracking is mandatory.

Gargoyle’s inventory slog approach is back, but there are plenty of strange twists. As always, random items are all over the place, but now they are easy to find. Most items are infinitely generated by supply units in the walls, allowing infinite access to objects. This also means that the same items can be used for multiple puzzles, a design element that many adventure games today still avoid. In case the wrong item is grabbed, the player can throw anything out in special refuse receptacles. While it’s not as convenient as dropping it anywhere on the path, it’s still pretty easy to manipulate the item system as long as your maps are detailed.

At various points throughout the game, Marsh will encounter trap airlocks. Before entering, a video screen warns the player that there is some environmental problem, whether it’s lack of oxygen, a bomb, or poisonous gas. Usually, the exact item required doesn’t exist, whether it’s a gas mask or an oxygen tank. This is where item fusion comes in. 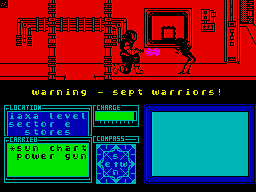 Throughout the game, basic items need to be fused together at factor stations. Similar to crafting elements featured in many titles today, items are put into a container and formed into new tools. The items you create either become important keys or life-savers in the trap area. Some item crafting makes sense: a cake can be made using flour, a baking tin, and water. Others are downright bizarre, like gauze and charcoal combining to make a gas mask. Depending on the puzzle, this makes solutions much more predictable or incredibly difficult.

Most of the illogic appears in the game’s second half where you must manufacture lettered tokens. Their combinations are hinted at through incredibly obscure clues which most sane people will ignore in lieu of simply looking up a walkthrough. Even worse, the items needed to make these tokens are inconveniently placed on opposite sides of the base. Mixing a nonsensical puzzle with an hour long trek is never a recipe for player satisfaction.

Because of the one way elevators, Marsh will frequently have to go through the exact same corridors and trap airlocks multiple times to accomplish anything. Players will probably go through the dust bomb area over a hundred times before solving the game. To alleviate some of the strain, the game rewards the player after unlocking the main computer area, opening up formerly restricted areas. This gives access to both new areas and easier routes to old, although it hardly changes the backtracking procedures. Meandering about looking for new item combinations is the name of the game until the very end. None of this would really matter if John Marsh could stuff his pockets silly a la every LucasArts game, but Gargoyle’s four item limit on inventory space remains. There are some conveniently located lockers that items can be stored in, but it’s difficult to tell what is really needed without thorough experimentation. Either way, there’s going to be more walking than ever before. 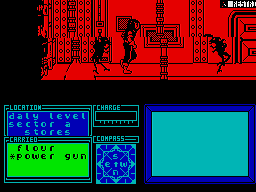 There’s little to break up this monotony aside from a mini-game found near the final area. Starting on one side of a three by three grid, the player has to move three pawn-like pieces into any three-in-a-row position. It’s definitely an interesting addition and not one common to early graphic adventures.

Despite the constant backtracking, Marsport remains fun. The shooting sections are cool in spurts, and Gargoyle’s typical graphical touches remain a treat. Gargoyle purists will find a lot to love about Marsport’s intricate maps and obtuse puzzles, but the uninitiated will start pulling their hair out at the half hour mark.

When released in November 1985 on the Spectrum, Marsport received rave reviews. Many concentrated on the large game world and, as usual, the animated graphics. A few felt noted the game was much more frustrating than its predecessors due to the constant mapping, but the majority of publications agreed that Marsport was another Gargoyle gem.

This time, the Amstrad version is largely identical to the Spectrum original. The game runs smoothly and retains the exact same color scheme.

In 1989, Marsport was re-released alongside every other Gargoyle adventure game on Rebound’s Gargoyle Classicscompilation. The game also appeared on Activision’s Kidsplay compilation in 1987 and was featured on the covertape of Sinclair User 120 and Your Sinclair 62.