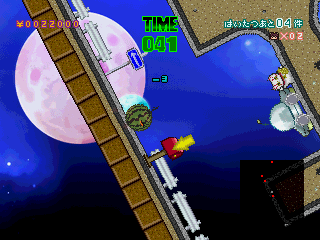 This review was originally featured in Indiepocalypse #5. Please check them out! 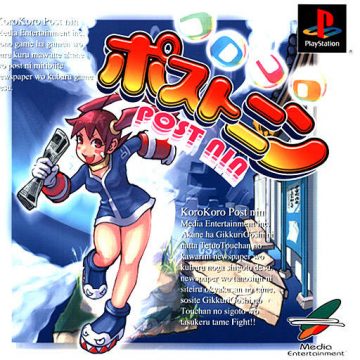 Mail delivery is apparently a lot more complicated in the future! Rather than building neighborhoods on the ground, houses are now erected in large, square mazes where gravity basically doesn’t exist, filled with all kinds of hazards like spikes. But nothing can stop Akane, the hard-working postal carrier, in Media Entertainment’s cult classic PlayStation game Korokoro Post Nin. 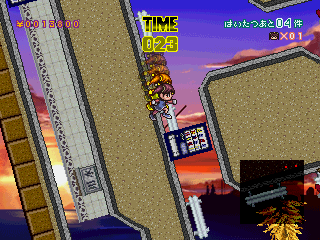 The game is a lot like Taito’s Cameltry (alternatively known across various territories and ports as On the Ball, or just plain Labyrinth), in that you don’t directly control the character, but rather rotate the entire 2D maze back and forth and guide them through it. (“Korokoro” is an onomatopoeia word for the sound of a small thing rolling around.) While the goal in Cameltry was just to guide your ball to the exit, it’s slightly more complicated in Korokoro Post Nin, as you need to hit all of the mailboxes spread throughout each level.

It’s not enough to just touch them, either, as Akane needs to hit a precise point in order to register them. Indeed, it’s to your advantage to have Akane hug the walls to make this easier. There are obstacles, too, many of which can be avoided, some of which can be killed if you’ve generated enough velocity for Akane to “dash” along the ground. Colliding with most of these will shave a few seconds off the precious timer, but some of the more vicious ones will kill you outright. It can get pretty disorientating because there’s no real concept of “up” or “down” since the whole screen is spun around, though a radar will give you vague guidance to your goals. The spacey vibe of the game – particularly the strange mechanics, the oddly realistic backgrounds, the female protagonist and the serenely catchy soundtrack – is also heavily reminiscent of the puzzle-platformer Umihara Kawase. 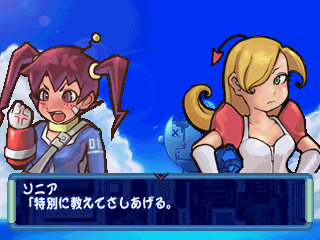 Korokoro Post Nin was released late in the PlayStation life cycle by a little known publisher – from the looks of it, it’s obviously a low-budget release, but it has an arcade-style mentality that was becoming more and more unusual around that time. It is a little frustrating since the game really would’ve benefited from an actual analog knob – there’s no true analog support to control the speed of the rotation, despite supporting the Dual Shock controller. It’s a great title for speed runners, though, because while the game ultimately isn’t that long – ten worlds at four stages each) – and can be beaten in less than an hour – there’s a lot of challenge to be had in making Akane tumble around and try to create the perfect mail delivery run.