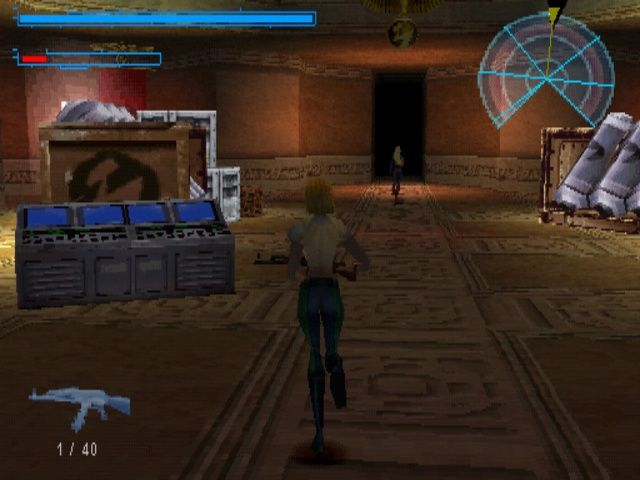 Beginning publication in 1998, Danger Girl is the still-ongoing comic book series of the same name, created by J. Scott Campbell and Andy Hartnell, and published by IDW. If you’re familiar with J. Scott Campbell’s work, then a cast of attractive, scantily clad women won’t be a surprise. In 2000, in the twilight years of the PlayStation, THQ published a PlayStation tie-in starring the comics’ various femme fatales, likely due to the popularity of female-led games like Tomb Raider. It was developed by n-Space, who worked on Duke Nukem: Time to Kill, and later developed Geist for the GameCube.

The best way to describe Danger Girl is a mix between Tomb Raider and Metal Gear Solid, with a bit of James Bond, and of course Charlie’s Angels tossed in there. Typically, the plot in the comics revolves around the Operation Danger Girl squad fighting the neo-Nazi Hammer empire and saving the world. The story of the game follows the first seven issues of the comics, but with some minor changes. The game opens with a ritual in an ancient temple that goes horribly wrong. Years later, we’re introduced to the Hammer Empire, who want to find the temple to use it for their evil plans. 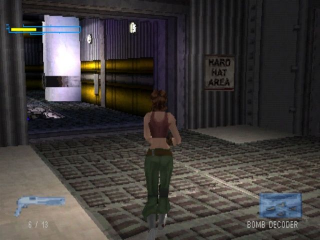 Danger Girl is led by a former British agent Deuce, and the team consists of Abby Chase (a treasure hunter/leader of the group), Sydney Savage (a former Australian special agent), and the new member of the team “JC”. Each of the girls has different equipment, but this mostly comes down to differences in weapons and (usually revealing) outfits. None of them have different abilities in the game itself, which feels like a wasted opportunity for more varied gameplay.

The controls are pretty clunky, similar to many 3D games of the era. The default movement control scheme is a bit confusing, as pressing left or right on the D-pad moves the camera, while L2 and R2 are used for strafing. By default the X button shoots and the Square button jumps when it should be the opposite, but fortunately, this isn’t a problem as you can rebind the controls. You can run and shoot (and run in a curved line), and use the strafe buttons to move around the corners and clear rooms more easily. During the game you will also perform impossible jumps and stunts, an aspect obviously borrowed from Tomb Raider. In addition to this, you also have two ways to aim weapons: auto-aim and manual aim. Auto-aim is pretty good and does the job, while manual aiming with the Triangle button is useful for shooting things in the environment and headshots.  It takes time to get used to it, but it can be useful for stealth sections. Also, don’t turn the analog function on when using a Dual Shock controller, since the Triangle button will stop working, and the controls will sometimes lock completely. 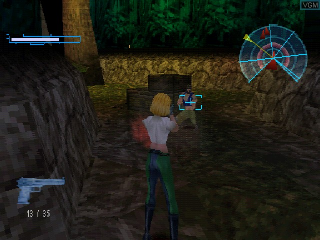 Some missions in the game are also split into two parts, where you control two different members and switch between them. One particularly annoying issue is that the levels don’t guide you to your goals, which can require some tedious backtracking if you miss something.  Frustratingly, it also lacks in-game saves and checkpoints, so if you die during the mission, it will restart from the begging. The AI isn’t groundbreaking, but the enemies will move to get a better shot and even toss grenades if you stay in cover for too long. There are also several QTE parts on some levels, but these for the most part aren’t a problem and are really easy.

The game has 12 levels, which will send you all over the world. You start the game in the jungle, then proceed to the oil rig, go to London, and then the finale. All of the levels have a puzzle of some sort or use an item in certain places. The cutscenes in the game are fairly well done for a PlayStation game. 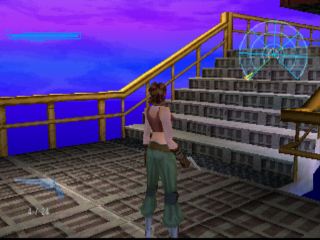 Overall, the presentation of the game is fairly well done, at least comparable to the Tomb Raider games. The graphics are decent for a 3D PlayStation game, but the character models seem to have been given more attention than the environments. However, the framerate can get quite dodgy, occasionally dropping to single digits during QTE segments. Everything from the cheesy action intro, cutscenes, loading screens, and music, all of it manages to capture the spirit of the comics. Each mission begins with a title card showing off some of the comic artwork, along with the mission’s title, which is usually some kind of groanworthy pun. The music sets the mood perfectly, and voice acting, for the most part, is decent and fits the characters (except maybe for Sydney’s goofy Australian accent).

Upon release, the game was panned by critics and received mixed reviews. Had it been published a few years earlier, reception might have been warmer, but considering it came out in late 2000, it felt dated almost immediately at release, especially with the PlayStation 2 right around the corner. Still, that’s part of the charm today, encapsulating an extremely late 90s property in an extremely late 90s package.