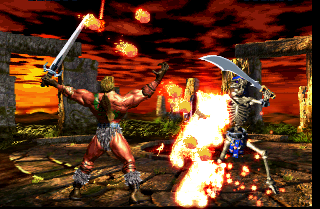 After Orchid defeated Eyedol, the two-headed cyclops Ultratech had hanging around their basement, his death creates a time warp that sucks the Killer Instinct fighters 2,000 years into the past. This time warp also releases Eyedol’s rival in conquest, Gargos, from his dimensional prison. Now the stranded combatants have to fight their way to Gargos in their attempt to return home, while the warriors of the past make it their goal to kill the demon lord. Truthfully, though, the whole time travel thing factors even less into this game’s plot, since there’s still several stages that take place in “modern” times, anyway. The story matters so little, that this is what the N64 version has to say about the game’s plot:

Well, that clears everything up nicely. That’s a rather unusual boast, considering there’s only been one other Killer Instinct game at all at this point.

Cinder, Riptor, and Chief Thunder are out of the roster, supposedly because they got the least play in the original game. In their place are kung fu lady Kim Wu, the Conan-esque Tusk, and the Amazon warrior queen Maya. It’s definitely nice to have more of a female presence this time around besides Orchid, although it would have been nice to have an extra non-human character, too. The returning characters also get some tweaks to their design, like Sabrewulf getting cyborg arms for no particular reason. Sadly, while Orchid’s model looks a little better this time around, her breast-emphasizing outfit certainly does not.

The fundamentals haven’t changed a whole lot from the original game, so if you remembered what you learned from the original KI, you’ll have a good start. Most characters can now throw people, as well as reversing your opponent’s throws, and while they’re not very damaging, they’re useful to get past an opponent’s guard. Besides, after the last game, they don’t have an excuse not to have them. On the defensive end of things, you can now parry certain standing normal, which can lead either lead to a dizzy or a special opener that can lead to extra long combos, if done properly. Defensive players also have another slight advantage in a “Rock-Paper-Scissors” esque system where certain special moves will win out against others if they connect, meaning that you can play a little more patiently and focus on punishing your opponent. Unfortunately, knowing just what moves beat what is pretty much going to be completely random without a guide on your side. 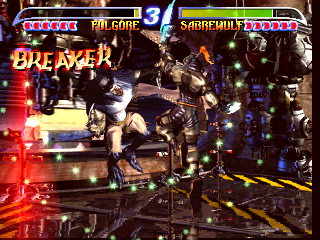 While the basics of the combo system still apply, everything’s been generally made a lot easier, so there’s a lot less memorization to deal with. Performing autodoubles and breakers now have grounded rules as to which button you’re supposed to use for them, which makes actually performing a lot easier to do. You’re also no longer limited to a single special that counts as a Linker, so you don’t have to stick to that one move again and again to keep your combo going. In terms of new additions, there’s a lot more focus on juggling your opponent, and a variety of ways to set them up for it. You can start a combo from mid-air that’ll set them up for a juggle, throw them mid-combo, and certain ender moves will let you juggle them, too. Since the best way to avoid being combo broken is to mix up your moves as much as possible, they’re nice techniques to be aware of.

The biggest new addition to the whole combo system, however, are the addition of proper super moves. These are governed by a meter underneath your character’s health bar, which fills up when your attacks are blocked, when you take damage, when you successfully combo break, or through certain special moves. Some moves only take one block of meter to perform, while the most powerful moves take up a whopping six blocks, or about half your meter. Generally, a lot of the super moves you’ll come across are enhanced versions of regular special moves, which come out faster, do more damage, and have invincibility on them. Some supers make great ways to start off a combo, while others can be used as linkers, adding on a lot of hits and quick damage. Others have new effects entirely, like letting you teleport, perform aerial attacks, or in Jago’s case, get up as a ghost after losing your red health. Again, don’t try this against anybody who’s bigger than you, for your own safety.

Obviously, though, the most important part of knowing how to combo is how to make it look completely awesome, and KI2has you covered there, as well. Every character now has multiple enders, and for each one you do, the more hits the next one you do will add. Pull them all off in one match and you’ll earn access to an extra fancy, unique ender. There’s all sorts of new ways to style your combo, from speeding them up to make them harder to break, slowing them down to force your opponents to watch every hit, and match-winning combos can even have finishers added onto them. The Ultra Combos return, as well, and if you really, really want to show somebody just how much you hate them, you’re welcome to do those in slow motion, too. This time around, if your opponent can break with perfect timing, they can stop your Ultra before it starts, giving them one more shot at making a comeback. 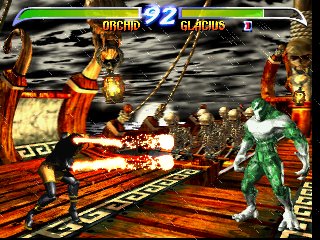 Every character has enough moves that they feel a little more distinct than they did in the previous game, which is definitely nice to see. Glacius, for example, has a stunning grab attack he can perform, making him feel a little more grappler-esque. Newcomer Kim Wu, on the other hand, has a lot of moves that she can do from the air, something which a lot of the cast can’t do. Success still generally revolves around your ability to combo, but the new additions give a little more freedom to how you accomplish that. The offensive player has more options to vary up their combo to make it harder to break, while the player on defense has an easier time breaking a combo, which balances things out. All the tweaks lead to a game that feels a little more like a proper fighting game, and less like a race to be the first to enter a cheat code whenever you land a hit on your opponent. 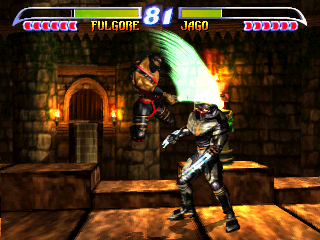 Finishing moves, now referred to as Ultimates, are done a little differently this time around, however. When your opponent is about to run out of red health, you can perform one Ultimate as a special move, which will kill the opponent in a flashy fashion, should it connect. Another can only be performed as part of a combo that’ll finish off your opponent’s red health. Once again, none of the finishers are particularly objectionable, and some make a better end to a fight than others, like having a random dinosaur show up to eat your opponent. When you have a game where your opponent can be squashed by a baby elephant, however, Eternal Champions doesn’t have much to worry about. The Humilations are also out, for better or worse. 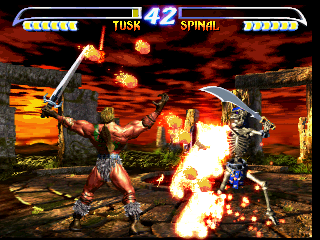 The single player mode is actually far easier to get through than the previous games, and there’s most likely never going to be anything that’ll give you as much trouble as the original game’s final battles. Even though the new boss, Gargos, still loves to heal himself up whenever he’s able, he leaves himself open a lot more, which means he’s not a complete pain to deal with, either. Not that anything that breaks from the trend of how brutal 90s fighting game bosses can be should be considered a complaint. Each character also now gets multiple endings, depending on if you use a finisher on certain characters or not, some of which end on a better note than others. It’s a nice touch, although none of the endings are quite as gloriously dumb as Eyedol’s ending from KI1. 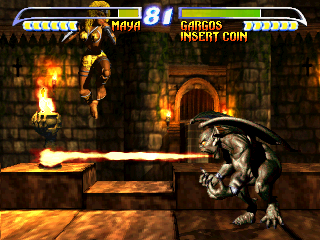 Although the CGI look still hasn’t aged very well, at the very least, KI2manages to look far better than its predecessor. The humans are a little less blocky, and a little more stylized, which helps make them look a less chunky when viewed close up. There’s even more style to everything, from bigger particle showers, to watching your opponent flip helplessly through the air after a particularly big combo. The entire game feels way more energetic, from the fact that everything’s more colorful, to the way that the music’s typically at a higher tempo. It’s an interesting visual choice, one that makes the game a lot more exciting to watch and play, which ties in well with the tightened mechanics. Sadly, while the soundtrack CD doesn’t come with the port, the soundtrack’s even better this time around, still keeping the musical variety, but making the tunes themselves far catchier.

The Nintendo 64 version, renamed Killer Instinct Gold, suffers from a few cuts to help it fit on a cartridge, although it hasn’t been through the wringer quite as badly as the last game’s SNES port. All the FMV is gone, once again, with the backgrounds having been redone in 3D. They’re a little blocky, but they’re decent recreations that get in all the details of the arcade game. The multiple endings are also gone, with most of them having been rewritten to end on a positive note. The character sprites themselves come out looking far better, and with a lot less frames lost, so overall, things look a lot more authentic. They’ve also managed to keep all the audio, impressively, from all the announcer’s lines, to the vocals in TJ Combo’s stage.

The Practice mode returns, now with the option to see your character’s movelist. It would have been nice to see this during regular gameplay, but baby steps. There’s also a Training mode, in which each character goes through four tutorials that show how to do their specials, basic combos, combo breakers, and which moves counter others. It’s a really cool, innovative feature for a fighting game, which means they had to find some way to mess it up. In this case, each segment of each tutorial only gives you so many chances to get it right, and should you run out, the game loses patience with you and makes you start that tutorial all over again. It’s helpful for learning how to function with a character, but doesn’t really do much more than a moves list could. Still, it’s a pretty fine port, and a far more aesthetically complete one than the SNES conversion of its predecessor.

Killer Instinct 2 many, many issues of the original sequel, chief of which that it was far too difficult to figure out how to play the one way it wanted you to. It’s a far more approachable game than its prequel, and one that feels a little more well rounded. It’s still a bit too weird and too offense-focused to match up to the best of Capcom and SNK’s output, but as far as mid-90’s fighting games go, you could do far, far worse. Compared to the original game, which was a clunky curiosity, if you gather some patient friends for this one, you’ll still likely have a decent time. 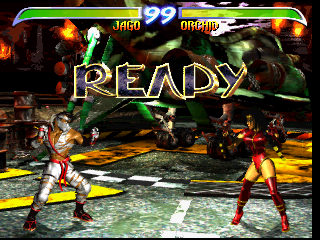 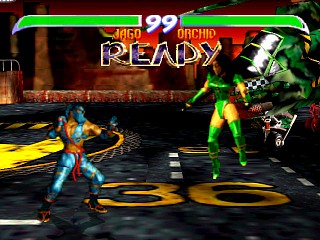