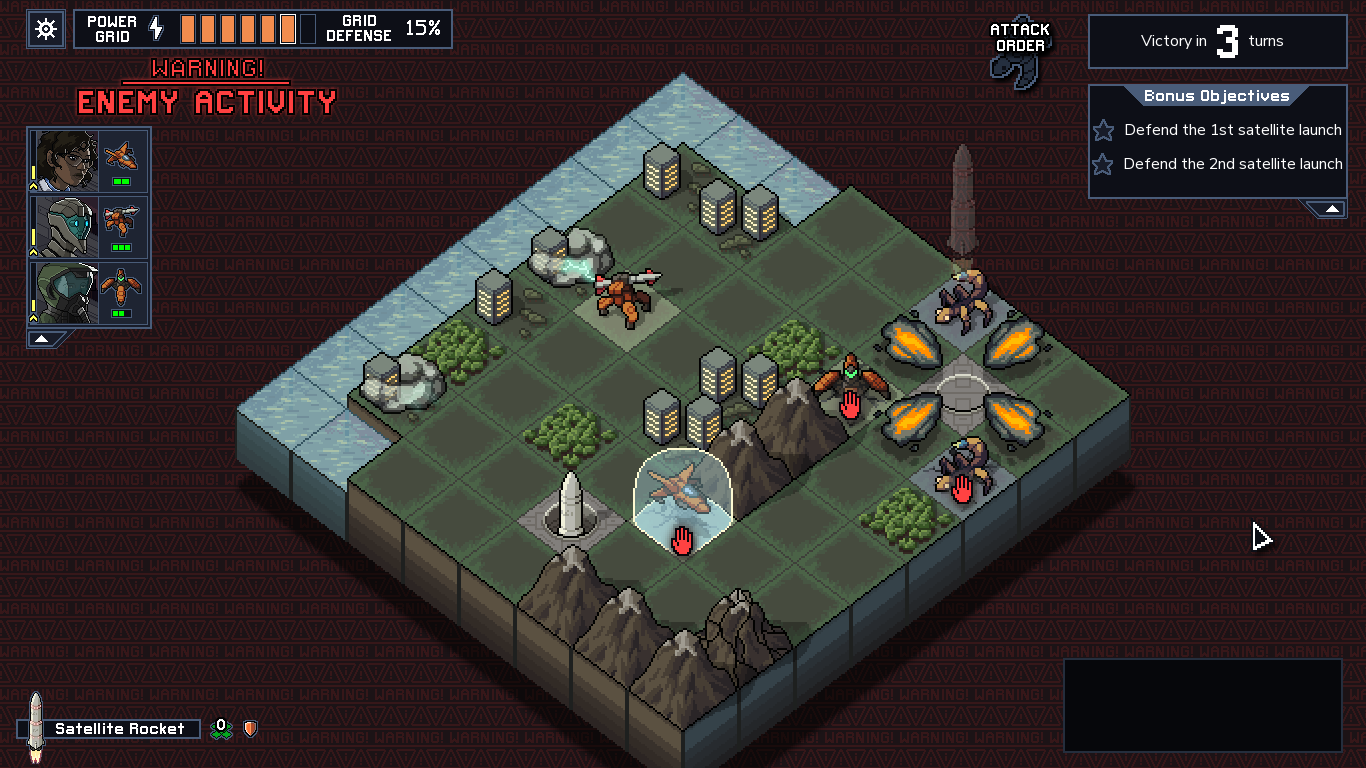 Six years after the mega hit FTL, Subset Games finally released a new game, and what a game it was. The studio was flushed with talent, even borrowing the writing talent of Chris Avellone of Black Isle and Obsidian fame, but it took awhile to find a theme that would fit with a strategy game prototype they built. Eventually, they decided to make a game critical of action films that let the heroes off scott-free for property damage that had become so popular as of late, particularly Pacific Rim. The end result was Into The Breach, which might go down in gaming history as not only one of the best rogue-likes ever produced, but a brilliant criticism of player perspectives almost entirely through mechanics and design. 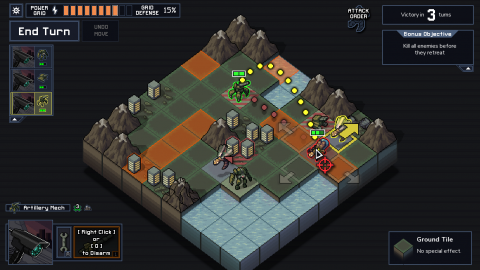 Far in the future, the Earth has been ravaged by both rising water levels and an invasion from evil alien monsters called the Vek. Things seem doomed, but the human race has devised a new strategy – time travel. The new plan is to drop pilots and a set of three mechs into a timeline at the start of the invasion and do whatever is necessary to stop it and save the world, returning after the job is done to try and set more time-lines right. Of course, if something goes wrong, it’s just time to start all over again in another time-line with whoever survives.

Into The Breach is designed so masterfully that just the basic gameplay loop overcomes every shortcoming (which are all mostly minor). You start a run, try to free two of four islands to get to the final mission or try and do as many as you can for a better score, fail, go back, pick up new mech sets and/or choose new pilots, and try again. Every fight plays out on a grid and ends automatically in a set number of turns as you try to survive and accomplish sub goals for rewards. You instantly fail the whole run if you let the grid go down, which loses power every time a city or building is hit, rechargeable by protecting major power sources in some missions. Thus, you can’t live out your robot combat dreams, instead thinking through how to win in grim scenarios with as few losses as possible. 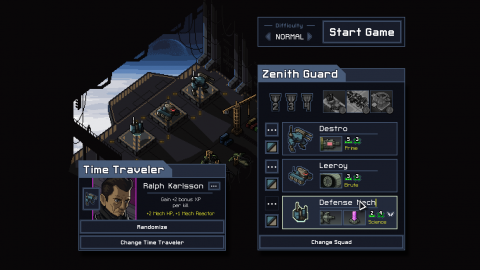 The game’s writing really tries to make you understand this, which isn’t too surprising when you remember Avellone (KOTOR 2, Planescape: Torment) returned as the main writer. Your pilots, the island CEOs, and the civilians in the cities all have dialog during missions and react to your successes and failures, reacting in ways completely indifferent from the player’s perspective. Despite most of these characters having no names or any development to speak of, you get an idea of who everyone is by just how they talk and how they react to different situations, creating a heavy atmosphere. Music and color pallet only help with this, conveying dread and desolation alongside excitement and hope, often at the same time. A focus on purples was a great idea that really makes darker areas and objects pop. The fact the gameplay loop distances you from the people in the game world is also one of the game’s most interesting aspects, creating something that gets under your skin the more you think about it. It’s very much the opposite of what you’d normally expect from giant robot games, which either divert into flashy combat or engineering porn.

The end result is a very fun game that also challenges preconceived notions of both a genre and a medium. Into The Breach is not really a “player’s” game in many respects, wanting you to feel the weight of your losses as a player and not because of your character. Even as you go back and try and do better, there’s still entire time-lines you left to die, and failing in those time-lines always results in an ending moment of chaos and despair. This isn’t to say the game doesn’t reward you for good play, quite the contrary. Into The Breach is a delight once you start figuring out effective tactics and strategies, especially with what you can accomplish with them. The starting squad is well balanced in their uses, each of the three mechs focusing on a different purpose. The canon mech does light damage and pushes enemies back in a straight line, the artillery mech is more useful for breaking up groups, and the brawler mech can do significant damage up close and personal alongside push back. Once you figure out that you can insta-kill some monsters by pushing them into the sea, kick them off their planned attack course, and even push them on spaces where monsters will spawn next turn to block those monsters and damage the blocker, the game really starts opening up. A winning strategy isn’t dealing as much damage as possible, but finding the best way to survive with the least damage done to you. 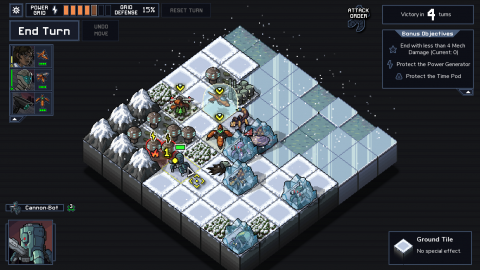 Every single squad has different strategies and wildly different powers, from a squad that focuses on dealing damage with a rock tosser and an electric using brawler that can hurt an entire chain, to the laser mech squad that can create barriers and pull enemies around. You can even mix and match mechs from different squads, but it’s wise to use the sets given and accomplish different achievements with them in order to earn coins that can be spent on unlocking more mechs. Pilots also come with their own special powers and gain more as they level up, letting you select one main one from a pool at start. If a mech is defeated, it gets reused in later missions, but the pilot is dead and their powers are no longer in effect. It creates a strange scenario where the mechs are more important than the people piloting them, a necessary sacrifice for the bigger mission.

Actual combat is filled with ingenious little touches, like starting a battle by having enemies move first and plot out their actions they’ll execute after you end your turn. The challenge then becomes ruining those plans, which becomes difficult the more enemies populate the field. A battle can go from great to a disaster in a flash, so it’s vital you try planning ahead and positioning your mechs in ways that will make them useful for what may come and just not the immediate here and now. It distills the complexity of larger strategy games into short mini-battles that can be over in just a few minutes, creating the backbone for the addicting element of the game. Letting you select what missions you want to do on each island, but limiting what you can do based on what area you re-capture, gives the player just enough control and freedom to prevent the game from feeling restrictive. 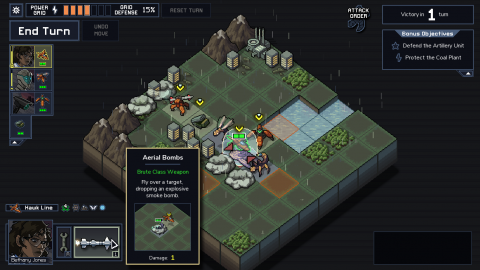 Even the rogue-like elements manage to compliment the game, allowing you to earn stuff for later runs far more easily than most in the genre, with roughly hour to two hour long runs – assuming you’re successful. There’s still risk and reward at play, however, as you can’t take back upgrades and weapons you find, but you can bring back your favorite pilot with all their experience and earn coins from achievements for mechs. There’s a sense of forward momentum both in the mechanics and in the design, as experimenting with different mission types and squads helps a player see new ways to tackle a situation. The game goes by quick and almost always succeeds at satisfying, but there’s also that introspective element the narrative brings that truly makes Into The Breach something special. There’s really not another game out there quite like it, a title that makes up for a lack of pizzazz through the mastery of combining the base mechanics with an always on aim blueprint for the final work. Despite the modest presentation, the years of thought and work that went into this title really shows. It’s difficult to say a game is perfect, because no such game exists, but Into The Breach is one of those few that makes that descriptor tempting to apply.