The Super Famicom was home to a number of excellent action-RPGs, amongst them Illusions of Gaia, Soul Blazer, Terranigma, Brain Lord, and many others. Most of the best ones were localized, but like many RPGs on the platform, there were still a significant number that stayed in Japan. Such was the fate of Neugier: Umi to Kaze no Kōdō (the subtitle translates to “Heartbeat of the Wind and Sea”), developed by the ever-prolific Wolf Team. 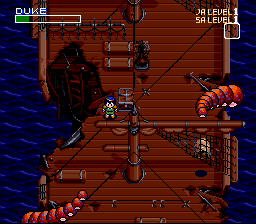 The story involves Duke, a young nobleman and son of the evil Count Wein of Neugier. He’s returning to his kingdom after a period of exile, only for his ship to be attacked by pirates. After fending off a sea witch and a gigantic octopus, he is saved by a girl named Secia, who has been hiding from Count Wein’s henchmen. Supposedly, Secia is an outlaw, but Duke thinks she’s too kind to do any wrong. Duke, indebted, goes off to help Secia against her wishes, and sees if he can get his father to come to his senses. 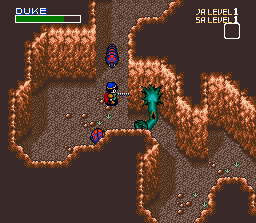 The crux of the story lies in the set-up and isn’t exactly the focus of the game. And while Neugier is technically an RPG, these aspects are fairly minimal. The closest things to levels you have are indicators which show how powerful your standard and jump attacks are, which increase the more you use them. Plus, you can collect hearts to raise your maximum health, akin to The Legend of Zelda. There are a few items to modify your offense and defense, though not many. 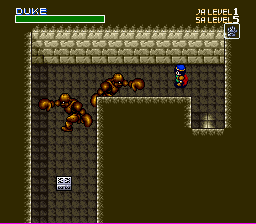 The emphasis is put on combat and solving puzzles, as some get pretty creative, and there is usually a “trick” to defeating most enemies. This is especially true because you only take damage when foes are attacking, and merely touching enemies doesn’t hurt you. Studying enemy behavior is crucial to surviving, as Neugier rewards creative thinking just as much as it rewards reflexes. The bosses are gigantic and quite intimidating, though they’re actually not very tough. Fights tend to consist of avoiding the enemy’s attacks, waiting for them to get tired, and striking when the opportunity arises, so they aren’t particularly difficult. 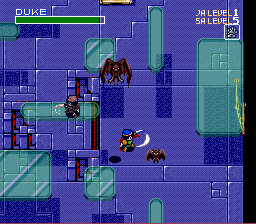 Unlike most overhead action action-RPGs, Duke is capable of jumping, which means you’ll be required to leap around a few areas. It’s pretty fun, though some areas can be a bit irritating. Thankfully, there are no bottomless pits and you don’t take fall damage, so falling down just means falling into a lower part of the level and retracting your steps. 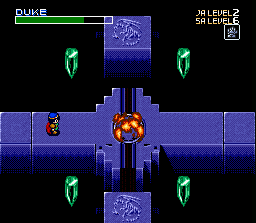 The most useful item at your disposal is the grappling chain, which is used for both combat and solving puzzles. Unlike in The Legend of Zelda, where you get numerous many items that are largely useless outside of the dungeon you found them in, the grappling chain is the only sub weapon you get, but it’s really the only one you need. It doesn’t inflict damage, but instead it pushes enemies back and stuns them. This can give you a chance to strike, especially if they’re one of the tougher enemies. You can also latch onto walls with it, which is not only useful for running away, but also for solving puzzles. Some of the more creative uses of the hook involve standing on a floating platform and using the hook to get you closer to the wall so you can get to door. Other uses involve using it to grab boxes and throw them across chasms or pushing approaching enemies back. Building the crux of the game around the grappling hook is pretty cool idea, though it’s never quite to put to use as much as it should have been. 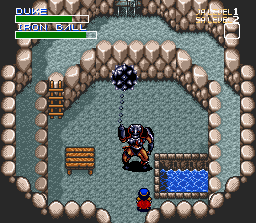 Alas, the visuals are underwhelming for a Super Famicom game, with small, indistinct sprites and generic backgrounds. The sound, however, is excellent, and was supplied by Yellow Magic Orchestra vocalist Yukihiro Takahashi. 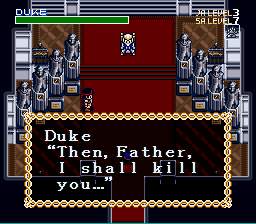 While a solid game, Neugier has some issues, mostly in regards to its length. While the core mechanics are fun and creative, there are only six chapters, each one taking place in a pretty big dungeon, and there are no real towns or overworld to explore. The whole game can be completed in a few hours, so anyone expecting an epic length quest will be sorely disappointed. On the upside, Wolf Team knew that their game was very short and decided to grade you at the very end. Grades also give you a title. It can call you normal titles like “Average Player” or “Skilled Player”, but some titles are pretty funny. If you do your very best, complete the game as fast as possible, and get every health power-up, you are “awarded” the title “Couch Potato”. 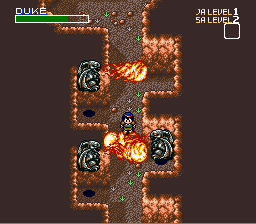 Neugier is also one of the first games Yoshiharu Gotanda worked on. He was only an assistant, and he was very young at the time (only 17), but his work on the titles allowed him to work on Tales of Phantasia, which would be the very first in the long line of “Tales Of” games. Later, he would be one of the many staff members that let Wolf Team to form Tri Ace to work on the Star Ocean series. 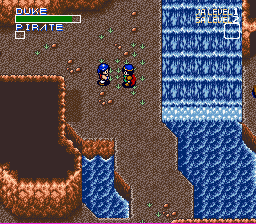 Like a lot of Wolf Team games, Neugier is one of those titles that has some cool ideas, but it’s also severely underbaked, both lacking in mechanical ingenuity despite its premise, and in its restrictive structure. It’s also rough around the edges in ways that other 16-bit RPGs aren’t. Still, what is there is enough to make it worth giving a shot. 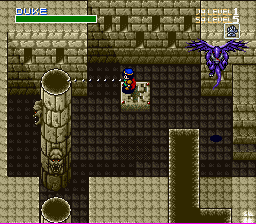 Telenet’s American branch, Renovation, was going to publish Neugier in the United States under the title The Journey Home: Quest For The Throne. It even had silly new box art in a typically American style, replacing the old one that was drawn by manga artist Kia Asamiya. The game was complete and ready to be shipped, to the point where warehouses stocked cartridges and major magazines such as EGM and Nintendo Power reviewed the game, praising it for some original ideas and criticizing the very short length and apparently awful translation. Neugier is German for “curiosity”, which is somewhat important to the overall theme, but the translation changes it to Nogal, which loses a little of the meaning. The game was ready to be shipped, until Sega acquired Renovation and The Journey Home suffered a similar fate to Psycho Dream. 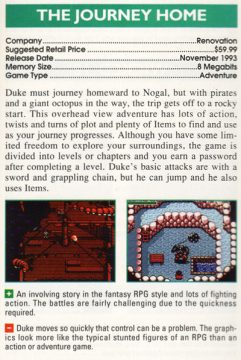 Luckily, Neugier doesn’t require very much knowledge of Japanese to play, and if you’d rather play it in English, there’s a decent fan translation courtesy of Haeleth. It’s a pretty good translation, so it’s most likely far better than what The Journey Home would probably would have looked like. However, the menus are not in English, so you have to guess which options do what.