The Super Nintendo Entertainment System and JRPGs go hand in hand. In 1994 the system was in the prime of its life cycle. It was also the year when arguably one of the greatest JRPGs of all time was released, Final Fantasy VI (Final Fantasy III in NA). It was a time when the genre was a niche market in North America, the only place you could learn about a new game was from the few video game magazine publications and word of mouth. Lost in the sea of under-advertised and little known games was a game published by Enix. Robotrek (released under the title of Slapstick in Japan) was developed by Quintet and Ancient. 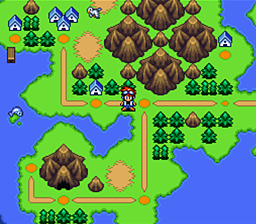 Aside from the American box art, which features an ominous Death Star-looking space station, it’s clear from the opening title screen that Robotrek was directed towards a younger audience. As its Japanese name would implies, it’s more about fun and funny than the constantly bleak idea that the “world is on the edge of collapse” outlook much of its competition held. For its time, it had some pretty unique concepts and game play mechanics. Combine that with the creative story, colorful graphics and characters, and you have a game that appeals to all generations of gamers. Unfortunately, in a time before the internet, few beyond the hardcore gaming community knew about it. According to Quintet, just 45,000 copies of the game were sold in Japan while only 20,000 were sold in North America. 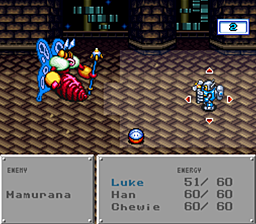 The story opens in a relatively modern/futuristic world with your father, a master inventor, and you, his apprentice, moving into a new house in the town of Rococo. You are also accompanied by your father’s assistant and your family’s ultra loyal cat. For reasons which are initially unexplained, your father leaves you to fend for yourself while leaving his assistant to watch over you. Fret not though, since you are an aspiring inventor, and soon you are tasked with building your first of three robot companions. You’ll need them to accompany you on your journey as the town, and eventually world, peace is put in jeopardy by a devious group known as “The Hackers”. 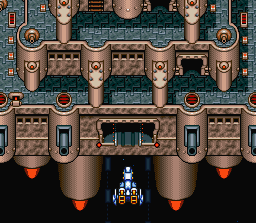 As an Inventor, even a lowly one, it’s important to remember to work smarter, not harder. Why fight when you have a robot that can do that for you? At the start of every battle, the protagonist runs out on the battlefield and throws what today we might call a Pokéball (two years before that little sensation would see the light of day). On contact, Pop! goes the ball (capsule?) and out comes your fully customizable robot! The fact that the main character doesn’t actually participate in combat aside from tossing out aid items when requested is unusual even twenty years later (aside from monster capture games of course). 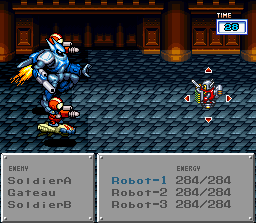 The battle system is a cross between a grid based strategy RPG and the Active Time Battle system, with the time bar acting as your stamina gauge. Different attacks take more or less stamina, requiring that you strategically plan your attack. Close range weapons tend to take less energy than a ranged weapon or a missile attack. Your robot can be outfitted with various forms of melee weapons such as swords, hammers, axes and blades. He can also hold ranged weapons like guns, lasers and rocket punch fists. To defend yourself, shields can also be equipped in one hand, while missile backpacks and even roller skate boots can be acquired. There are numerous combinations that can be created by equipping any sort of equipment for either hand, feet or back. Even the robot’s name, color and stat point allotment can be customized and changed. All equipment is displayed in real time, as well showing off the difference between a level 1 sword and a level 4 sword. 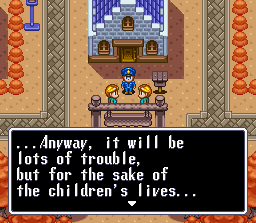 Enemy encounters are not random, and you won’t be thrown into battle unless you make contact with the enemy on the field map. If you find yourself out of items, then you can cautiously avoid encounters and work your way out of a dungeon. The game does suffer from some uneven difficulty progression, so leveling your robots regularly would be a wise thing to do. One nice touch to help in the grinding process is the bonus timer, which sits in the upper right hand corner of the screen. Depending on the number of enemies you are facing will determine the amount of time allowed. If you manage to defeat all the enemies and end the battle before the time limit has expired, then you’ll be awarded additional bonus experience. There are also bonus capsules that appear randomly at the start of battles. Their contents can range from bonus experience (only awarded if you complete the battle before time runs out), equipment level ups, health regeneration, items, or an explosion that will slightly damage your robot. 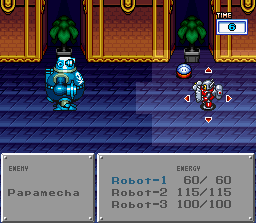 Inventing is the basis for which the story and gameplay is built upon though. Some items or weapons might be found throughout the world, but most can only be created by combining dozens of pairs of different items together. To make some matters easier, there are inventor manuals strewn around the world that corresponds to your current level. Once one of these books has been read, you will forever know how to craft that item in the R&D Machine. 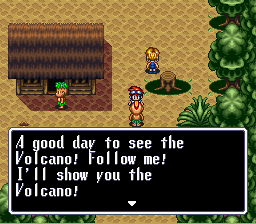 Compared to many of the games of the era, Robotrek has a pretty linear world map. Every main location of interest is marked on the map with a red dot with a path leading from point A to point B. Until late in the game, when you acquire your airship/blimp, you can only travel along the specified path. The upside is you will never get lost or not know where to go on the smallish world, most certainly a design choice that came about when directing this game for a younger audience.

The varieties of locations you will visit range from everything you can think of. On your journey you will explore forests, caves, a haunted house, the city sewer system, a secret enemy base inside a tropical island volcano, a snowy mountain research facility, time travel and even space. There is also a whole range of characters you meet are just as colorful and animated as the environments. One of the more well known characters even among casual fans is the giant talking man crab named Meta Crab, who is also depicted on the Japanese box art. One town has an NPC that shamelessly acts as an advertisement for other Enix games. 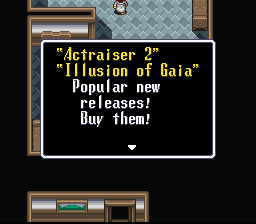 The enemies you encounter don’t vary a whole lot, as many of the enemies are reoccurring sprites with a different color scheme, an added hand weapon and slightly more powerful move set. However each environment does have a few of its own unique enemies which help keep things fresh. Bosses are large and often creative in design but lack any sort of threatening AI. More often than not, simply overpowering them by a few levels while using a head on attack will be enough to get the job done. 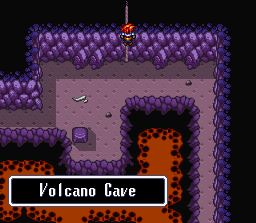 Throughout your journey you’ll come across, or need to invent, a number of random tech devices, which come in handy when traversing the game’s “dungeons”. There are the simple tools like the drill, which allows you to dig through rock walls, and the SurpriseHorn that lets you alert Hackers. There are high tech items such as Infared Glasses to see invisible objects or enemies, or the Relay device that allows you to talk to animals. Then there’s the just plain odd, but fun, items like the Change machine that allows you to change into a mouse and the CyberJack that lets you go inside computers. These open up a wide range of gameplay possibilities outside of the RPG elements, but it’s a bit disappointing that most of them are so rarely used from beyond their initial task. 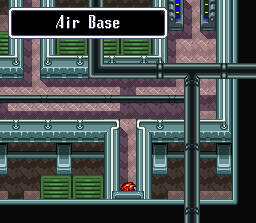 The game length clocks in at around twenty five hours, which makes it easy to pick and beat from start to finish. The game lacks any sort of post game challenge. There is really only one side quest, a fetch quest, and its reward make it pretty worthless. As for the post game, the only thing left to do is level up so that you can read all the Inventor Manuals which start increasing by every ten levels once you reach level forty. Level eighty unlocks the last Manual but once you get to that point there is little reason to need the weapon it teaches you. 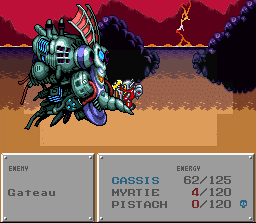 Twenty years later Robotrek remains mostly hidden from the world of gamers, created in a era of SquareSoft dominance and their legendary titles. The game still holds up and has aged fairly well, with the more common action RPG battle systems that have taken prominence today. The younger generation of gamers might find it a bit slow and simplistic but for those looking to try something different, looking to experience that retro RPG feel, or let their kids learn about and play JRPGs that don’t revolve around such dark, heavy themes, then this is something that’s worth checking out.