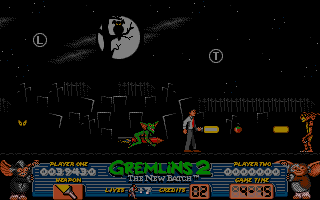 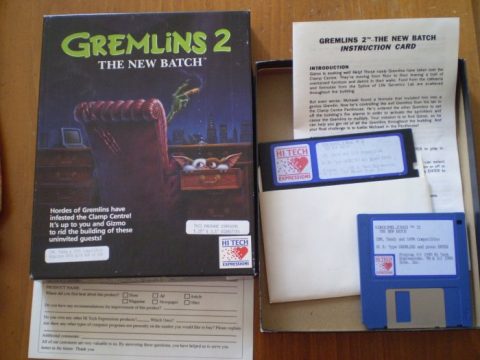 While Sunsoft created the two most famous Gremlins games on Nintendo hardware, UK publisher Elite was entrusted with the home computer licensing rights and put out a completely different tie-in. The first film mostly focused on Billy as the protagonist, but by the time the sequel rolled on everyone had recognized Gizmo’s star power, and a bit more emphasis was put on his struggle against the gremlins, which is reflected in the console and handheld titles as seen below. Elite was having none of it, though, and so their game stars good old Billy again.

This interpretation of Gremlins 2 is a truly typical Euro home computer licensed game – a bones-hard, nearly impossible run-and-gun with poor sensibilities in game design. In principle, it’s awfully simple: Just walk to the end in the stage, do a minimum of platforming to gather one of five “game completion items” in each stage and reach the elevator. Only two of the stages have a few rooms above that are reached by an elevator, but most of the time it’s just a straight line of screens. 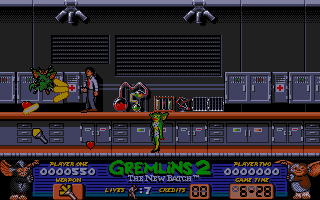 The problem is, shortly after Billy enters a new screen, he is assaulted by up to four gremlins at a time, all of which have different behavior and speeds, although most are fast. Some take multiple hits, and they keep respawning indefinitely. The only way to make it through a room unharmed is by knowing the patterns for that screen to the millisecond, and make not the slightest mistake. And just when you thought you made it past a wave, a locker drops on you from the background. Every once in a while, Gizmo drops down with a parachute, bow and arrow in hand, to take out one of the gremlins, but that is rarely enough to safe Billy’s life.

Add to that the fact that Billy in this game is an even more unlikely hero than he was in the movies, who cannot do so much as jump over most of the gremlins. He can duck to avoid items tossed at him, but he cannot attack while doing so. His weapon at the beginning is called a “torch”, which allows him to shoot bullets of light straight forward, ranging about a quarter of the screen. He can pick up a few other weapons, but only some are more useful than the standard weapon, like the “torch” that shoots forward and backward and the three-way torch. If he loses a life – a single touch by a gremlin or projectile suffices – he reverts back to the default. Some gremlins leave floating bubbles, which for some reason translate to currency when caught, and allow changing the standard weapon in between stages. The cheap weapons are all terrible though, as they go above gremlins that are right in front of Billy. But there doesn’t seem to be any way to leave the shop without buying, so as soon as you have ten credits, you have no choice but to waste them on buying the torch again.

When getting past the terrible difficulty, which is only really possible using a trainer for unlimited lives, there’s not much left to the game. Every stage is only a dozen-or-so screens long, and all you have to do is pick up one item, then leave. In stage four you actually get to fight the electric gremlin before he becomes your next “game completion item”, and vegetable and female gremlins appear as normal enemies, but there is no sight of the bat or spider gremlin, and after clearing stage five, the game just ends with a short message, no kind of showdown or finale.

Motivetime and Elite brought the game to the usual 16-bit computers and the Commodore 64, which expectedly has weaker graphics but otherwise is virtually the same game. Topo Soft from Spain then ported the game to Amstrad CPC and Spectrum, and despite working with weaker hardware, they actually tried to improve the game. The stages now scroll instead of the screen flipping of the original versions and when you die, you restart at the exact same spot. It’s still ungodly difficult, maybe even more so because you can’t just exit a screen to save your hide, and you only get five lives in the beginning instead of seven. If you’d ever get past the beginning, however, you’d see a boss battle against a massive, almost screen filling spider gremlin towards the end. And Billy actually gets to use the “game completion” items to reenact the finale of the movie, by hosing the gremlin hordes with water and then taking them out with the electro gremlin. 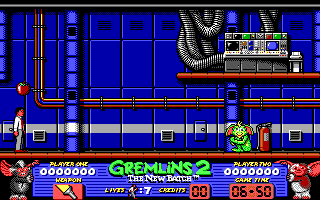 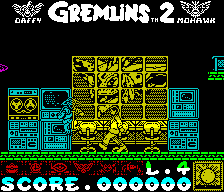 There was yet another The New Batch game that appeared a bit later than the rest, this time exclusively for IBM PCs. It was published by Hi-Tech Expressions, the same company who also put out a Gremlins 2 Print Kit, which you could use to print greeting cards and stuff with Gizmo and other characters on them.

This interpretation takes the form of a top-down maze action adventure. Once again Billy takes the lead, but early on he can free Gizmo, who then follows him around to give him cover with his trusty bow and arrows. To the left is a diagram of Clamp Center, which shows the gremlin infestation on each floor. Until a floor is completely cleared out, the gremlins continue to multiply as time goes on. At first, Billy only faces mean mogwai, but as the gremlin infestation spreads around, whole hordes of gremlins and even mutations appear. The game knows lightning, bat and spider gremlins, who can cause a lot more damage and are faster than the ordinary ones, but otherwise behave the same. 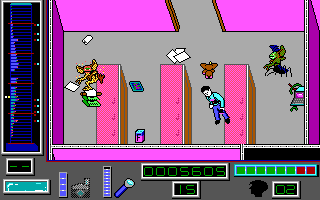 Billy takes the elevator to get from floor to floor, which moves in real time, so traveling multiple stories at once takes a while, unless you access the express elevator, which stops only every tenth floor. Then the duo of man and mogwai proceeds to search the rooms for monsters to take out. Billy carries a flashlight, which shoots a bullet of light straight forward, and a camera to clear out whole rooms at once. Both have limited charges – the camera more so than the flashlight, naturally – but spare batteries and films can be found around the building. Gizmo’s arrows are infinite, but since he always follows Billy around, it’s tricky to align him just right so he can hit the enemies. There are also foodstuffs to restore health and test tubes with colored liquids that merely add to the score.

Hi-Tech Expressions’ Gremlins 2 has solid mechanics, but is much too monotonous and boring. Clamp Tower stretches over a whole 45 stories, but they are mostly indistinguishable from each other, aside from arbitrary variations in the room connections and differently colored walls. Finishing all of them is awfully repetitive and just takes much too long, especially because there is no password or save function. Since all mutated gremlins appear all throughout the building, there are no highlights and no proper difficulty curve. At one time you might be fighting through hordes of gremlins on a highly populated floor, then search through lots of empty rooms for a single mogwai in the next instant. The ingredients for a cool game are somewhere in there, but the concept is not thought out and structured very well.