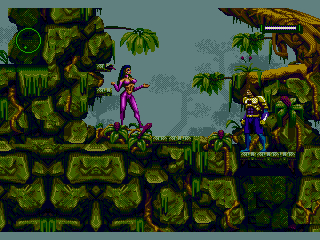 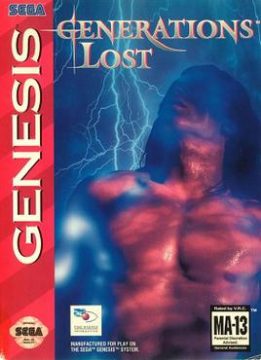 Generations Lost is a mystery of a video game. There aren’t even any sources to tell when exactly it was released. In clarifying this mystery, the game affords two approaches, the first being to look at the parties behind its creation. Between Time Warner’s involvement as publisher, the frequent invocations of “from the creators of X-Men [the 1993 Genesis game]” in advertisements, and the game’s high production values, what’s clear is that those involved with its creation had significant plans for Generations Lost. But what exactly were those plans? And what is one to make of Pacific SoftScape, the developer behind the game? Outside their ambiguous connections with Western Technologies, Generations Lost was their first game, and their only notable project outside some minor Sega Channel work. So unfortunately this approach raises more questions than it answers. 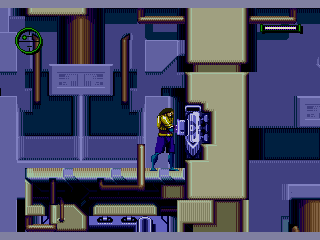 By contrast, the second approach – looking at the genre Generations Lost inhabits – yields greater insight into what the game is not only because it is part of the cinematic platformer genre, like Flashback and Prince of Persia, but because there are enough games like it to form a clear understanding of what cinematic platformers were. In many ways, that genre was a reaction to the Mario-esque platformer that was so ubiquitous during the 80s and 90s. Their designs focused less on crafting mechanically satisfying scenarios and more on adapting cinematic language to video games so as to better communicate their narratives. And where the stories Mario-esque platformers told were openly crafted for children – either fairy tales or Saturday morning cartoons – the cinematic platformer explored what it considered more mature alternatives. The hero may rescue a princess, but more often he would come to terms with an alien world or follow some journey to adulthood.

Considered in this light, two things stand out regarding Generations Lost. First, it’s a game whose visual logic overshadows all other aspects of its design. But more importantly, the game rejects the straightforward heroics that typify its peers. Where the actual level design might be legible under different circumstances, here the visuals explode outside of what a single screen can contain, sprawling in many directions at once. Consequently, the world appears either hostile or indifferent to the player’s presence. The dense foliage or mess of wires and steel may at times actively hide crucial information from the player, but just as often Generations Lost is content leaving the player aimless and wanting for guidance.

Secondly, what of Monobe, its protagonist? His enormous stature burdens his actions with a weight that hinders more than it empowers. Ducking, shooting, swinging across chasms with his plunkers – the delay on all of these actions opens him up to vulnerabilities that he struggles to compensate for. One gets the sense that Monobe is unsuited to perform the hero role his elders and the game thrust upon him. 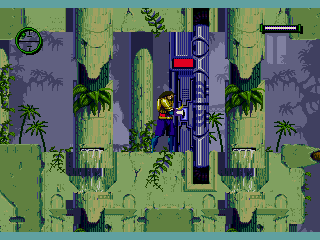 There’s an undeniable irreverence to what the game does, invoking some cinematic platformer conventions and subverting it in others. At the time time, there’s an indecisiveness about Generations Lost, or at least an inability to clearly articulate its own thoughts. Despite its wishes to be understood as a conventional action game (as the power-ups and focus on navigational challenges conveys), by rejecting the more straightforward cinematic platformer framework, the game refuses to acknowledge the ways in which that framework is already amenable to the action it aims to create. Moreover, with the game’s own framework being rooted in the rejection of another, any identity it creates for itself (no doubt after severe difficulty) will prove muddy and unstable. Practice bears this out. For as many opportunities as Generations Lost’s unconventional methods make available to it, the confusion it has regarding its own identity means the game is just as likely to miss or misuse those opportunities.

Still, it would be hasty to reject Generations Lost for these discrepancies. True, the game fails to match the standards it sets for itself, but the confusion it exhibits regarding its identity gives one reason to believe those standards may be too limiting. Moreover its derision suggests a deeper appreciation of the cinematic platformer and its limitations than the game itself may be aware of. Consider the story. The scene opens into a dimly lit forest. The elder tells the young Monobe the importance of the quest he is to embark on. He must go out into the world not only to restore balance to it but also to connect with his tribe’s long-standing traditions. Before he leaves, though, the elder passes on a symbol of that tradition: a technologically advanced suit passed down from his ancestors, the Jani-tors.

It would be easy to read this introduction as a continuation of the game’s derisive sense of humor. The real is allowed to creep into this fantastic realm that it might undermine whatever impact that fantasy might lend itself. Later incidents like the Kahrpanter temple or its congregation worshipping “The Box” (a set of flickering televisions) makes that reading all the more tempting. However, the imagery Generations Lost employs suggests a depth of substance that precludes clear cut satire. What is one to make of the visual design, for example? Looking at the levels, one always finds a world broken beyond the point of repair and indifferent to Monobe’s existence: dense and wild foliage claiming every surface it can, crumbling stone surfaces, a cacophony of broken wires. Generations Lost finds no humor in a world like this, but instead laments its existence, using dark and muted palette to de-aestheticize the wreckage. 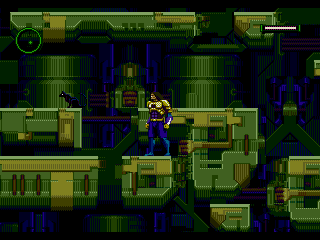 And at least as the story advances, there’s a pointedness to that destruction that prevents players from dismissing it as natural. Centuries before the beginning of the story, humanity created for itself and boarded a spaceship that they might chart out a new life among the stars. Its systems were designed to be low maintenance so the older generations wouldn’t risk later generations’ lives should something go wrong. But that decision backfired. The systems’ effectiveness led people to trust themselves too much to that technology. Their sense of self eroded, many lapsed into mindless factional conflict, and as the ship’s systems slowly began to break down, so too did their world.

Taken together, these aspects lend Generations Lost a dramatic weight that wasn’t visible before. Monobe’s quest takes on a new meaning. What place do Monobe or his tribe’s traditions have in a world that’s unable to receive them? More generally, creative concerns like these reveal Generations Lost as a highly contemplative game; one that touches on several related issues as it addresses contemporary cultural problems through a fantasy lens.

And although the game owes this quality largely to the 70s pulp science fiction it bases itself in, its pensive nature poses unique consequences as far as cinematic platformers are concerned. Indeed, Generations Lost resonates with the genre as strongly as it does because it identifies and fulfills the promises that serve as the cinematic platformer’s thematic core. Its sardonic sense of humor is rooted in a mistrust of any ideal that promises absolute of the self, whether it’s technology whose enticements of convenience led to humanity’s slow decline or the simplistic heroism (the tendency to center stories about boys becoming men) that defines its peers. At the same time, Generations Lost appreciates what kind of problem ideals like that pose. Even if they weren’t too necessary to abandon, doing so wouldn’t address the core issue that makes them problems in the first place. 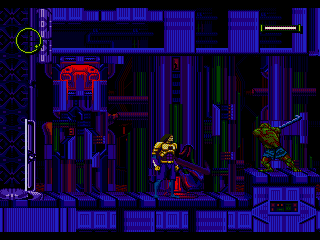 Thus one can read the game’s efforts as an attempt to solve this riddle; to forge meaningful relationships with concepts like technology or adulthood that don’t call for the sacrifice of one’s individuality. Approached this way, play appears both more open and less confused than it initially does. Although the world remains the sprawling mess it always was, the events within that world now feel highly punctuated, affording players steady opportunities to ruminate on the condition of the world around them. Likewise, controlling Monobe takes on new shades of meaning. One begins to notice an even split in the abilities available to him: on the one hand, those relating to his own being (jumping, punching, rolling); on the other, those relating to his suit (shooting, grappling, unlocking new paths). If both are necessary to successfully meeting all the game’s challenges, then one can describe play as a process on the player’s part of using the hero role to reconcile Monobe’s identity with his tribe’s traditions.

Admittedly this is an indirect reading of the game. The conclusions Generations Lost arrives at (suggested in the Jani-tor role) are far from glamorous, and they offer no definite answers. Even putting that aside, the game still relays those answers in a stilted and perhaps needlessly dense manner, especially compared against the clear cinematic expression of its peers. However, these criticisms may assume the ideal game as unambiguous and above all personally satisfying to the player, meaning it’s unlikely they would apply to a game as distrusting of the ego as this one. So while the method of delivery may leave players wanting, Generations Lost‘s conclusions remain more honest, accepting of uncertainty, and therefore more stable than those its peers arrive at.

Unfortunately contemporary critics didn’t express much interest in this deeper meaning. Some were appreciative of it (calling the story “surprisingly mature”), but most focused on the action at the surface and dismissed it as lacking in character. The advertising is partially to blame. Most of it either focused on information that was mostly irrelevant to the game’s accomplishments, like the New Age soundtrack; or overtly invited comparisons to X-Men and Flashback that critics picked up on even though such comparisons wouldn’t work to Generations Lost’s favor.

Yet the game owes just as much of its lukewarm reception to the scene its developers situated it in. Straightforward action was what was popular at the time. While Pacific SoftScape appears to have understood this by making those expectations relevant to their game, the fact remains that Generations Lost struggled to meet those expectations, and it would be the last video game the company worked on. After the release of a comic book tie-in (whose existence is very difficult to verify), both the company and their game would fade into obscurity.

Generations Lost’s major achievements lies not in what contemporary players and critics made of the game, but the ways in which it advanced the space it chose to work in. It brings textures of meaning to the cinematic platformer that wouldn’t be there otherwise, and shows that its techniques need not be bound to the themes they were most commonly associated with. The game pre-empted titles like Blackthorne (which was probably unaware of the lessons explored here) and anticipated others like Oddworld (which adopted that same thematic project in a more overt and coherent matter). Perhaps most impressive of all, it predates the indie boom of the late 00s/early 10s, where games like Braid and Limbo would revive cinematic platformer aesthetics while expanding on and reinforcing them with the “games as art” mentality. Generations Lost recognizes the naivete in such thinking, but also the value it holds if the game charts a path beyond it.