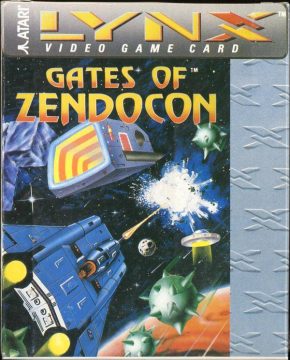 The Atari Lynx had the misfortune of releasing a mere two months after Nintendo’s Game Boy in 1989. While the Lynx boasted greater power and a color LCD, there was just no competing with the Game Boy’s lower price, better battery life and, of course, Tetris. Still, the Lynx was home to several quality titles and arcade ports, and its launch in particular introduced some of its most notable titles. One such title was Gates of Zendocon, an ambitious shoot-em-up that served as a graphical showpiece for the system while also covering a niche that was absent on the Game Boy until 1990.

Gates of Zendocon was published and developed by Epyx, a prominent publisher of 1980s computer games who originally created the portable system and was one of the Lynx’s strongest supporters for its first two years. The game was programmed by the talented Peter Engelbrite, who would go on to program some of the Lynx’s most popular titles, such as California Games and Todd’s Adventures in Slime World.

In Gates of Zendocon, the player controls an unnamed pilot that gets transported to another universe by the giant space spider called Zendocon. The goal is to navigate through 51 connected universes, defeat Zendocon, and return home. It’s not actually possible to play all 51 universes in one run since the game incorporates branching paths that encourage replays. Each universe is assigned a four letter password that can be used as a starting point and each universe has at least one gate leading to a different universe.

Gates of Zendocon features a combination of ideas and mechanics that make it different from most shoot-em-ups. For starters, the player can take three hits before dying. This also ties into the weaponry available to your ship, as certain functions become unavailable after taking damage. Your ship is equipped with a powerful laser that can be held for continuous damage, bombs that are dropped below your ship in an arc similar to the missiles in Gradius, and a shield that can block attacks and damage some enemies. Taking one hit disables your shield and taking two disables your laser, leaving you almost completely vulnerable. Clever players can even use the ship’s thrusters to deal surprisingly effective damage to anything behind them. It’s possible to repair your ship between universes by landing at the base that the player’s ship launches from, but some of them are booby trapped with an intermittent electric field that’ll kill you if you touch it, adding an interesting layer of risk.

Players can also find four different friendly aliens that will assist them with additional weapons by flying around the player’s ship, much like the options in Gradius. The “Flying Eyeball” flies below you and shoots fireballs, the aptly named “Cosmic Destroyer” chases after enemies and destroys them in short order, “Death Arising” shoots straight up and provides some welcome coverage, and the “Sonic Dart” shoots a large vertical wave ahead. They’re only found in specific universes, so it’s possible to play through the game without encountering them. They can also be destroyed if they’re shot enough times, crash into the environment, or when the player dies, so it’s wise not to get too attached.

Where Gates of Zendocon really shines is with the sheer variety of challenges that it throws at the player. As you’d expect from 51 different universes, many of them offer obstacles that are almost or entirely exclusive to them. Some standout universes include one where you have to use your shield to navigate through falling rubble, another where you have to destroy the weakest parts of screen-wide walls to pass through them, a universe that restricts your scrolling capabilities while you deal with a parade of tanks and robots, and a universe full of bubbles that try to push you into hazards and foes. The most amusing universe of all is the secret one found by discovering a hidden path within universe “TRYX” – it has you shooting through hordes of digitized heads of the staff who worked on the game! Discovering what each universe holds is the greatest joy that the game provides, so it’s worth using passwords to check out the stages you missed the first time through.

There’s a large variety of foes you’ll encounter throughout the game, and while many of them are difficult to distinguish blobs, the best ones really nail the feeling of encountering unspeakable cosmic horrors. You’ll encounter things like an eyeball attached to a satellite dish that reflects your shots, giant flying bugs and spiky cocoons, leech-like creatures that swallow you whole and large alien vessels that pursue and try to abduct you. The rate at which you encounter new foes remains consistent and the game cleverly mixes in ones you met early on with new threats to create more challenging situations. Certain enemies also prefer certain elevations, so the player can decide which ones they encounter by flying high or low accordingly.

It’s evident that visuals were one of the priorities when developing this game, because it really does look great the whole way through. The sprites in the game are all large and nicely detailed, especially Zendocon himself with his myriad eyeballs. The game also takes full advantage of the Lynx’s power by cramming the screen with dozens of enemies and projectiles without any hint of slowdown. The backgrounds for each universe tend to only be a single color, but they make up for it in variety and detail. You’ll travel through universes containing cracked cave walls, ones that are enveloped in fire, some that appear to take place in a forest-like area, several that take place in futuristic bases and cities, and even a few that appear to cover the walls in trails of human-like intestines, in case all of the other horrors weren’t enough. There’s also a cool effect where scrolling upwards makes the background more transparent or vanish entirely and scrolling downwards makes the background more detailed and prominent.

Some universes even incorporate specific tricks, like the way universe “BROT” seamlessly changes backgrounds as well as the color of your ship and HUD as it goes on. The flashiest display the game has to offer takes place in universe “NEAR”, which has the player fly through massive, strikingly detailed alien mouths with moving teeth, culminating in a boss fight against a giant human heart that uses an impressive sprite scaling technique to change its size and emulate a constant heartbeat. Even the act of defeating the most basic enemies is gratifying in the way they leave massive explosions behind, though they’re sometimes large enough to obscure the action.

Unfortunately, music is by far the game’s weakest point; there are only a few songs in the game and they’re far too repetitive to last through 51 universes. They tend to repeat the same sounds and oftentimes hold notes for far too long, resulting in multiple whiny, screech-like sounds that don’t put the Lynx’s sound capabilities to good use. Bizarrely, if you take long enough to complete a level, the song will eventually stop playing entirely until you pause and resume the game. The final battle against Zendocon takes place in complete silence, which is both a welcome change of pace and a great way to establish tension. The sound design fares better, with the sounds of the explosions you create being loud and consistently satisfying to hear and the introduction giving Zendocon a boisterous and intimidating laugh.

Gates of Zendocon holds up well today and can even serve as a solid introduction to the shoot-em-up genre. The game features two difficulties, easy and hard, that affect scoring potential and game speed. Easy mode is slow to the point of being downright plodding at times, but it’s perfect for beginners who need more time to make decisions and adjust to the mechanics. The passwords between levels also allow players to play at their own pace and being able to take multiple hits gives players a chance to recover from tricky situations. Gates of Zendocon also manages to avoid a very common issue with the genre by making your starting arsenal effective; many shoot-em-ups alienate players by disempowering them upon dying once, so it’s a pleasure to see how welcoming Gates of Zendocon is in comparison. An updated version of the game was supposedly planned for the Atari Jaguar, but it unfortunately never happened.

https://atarigamer.com/articles/gates-of-zendocon-universe-map – Map showing all of the passwords and how each universe connects