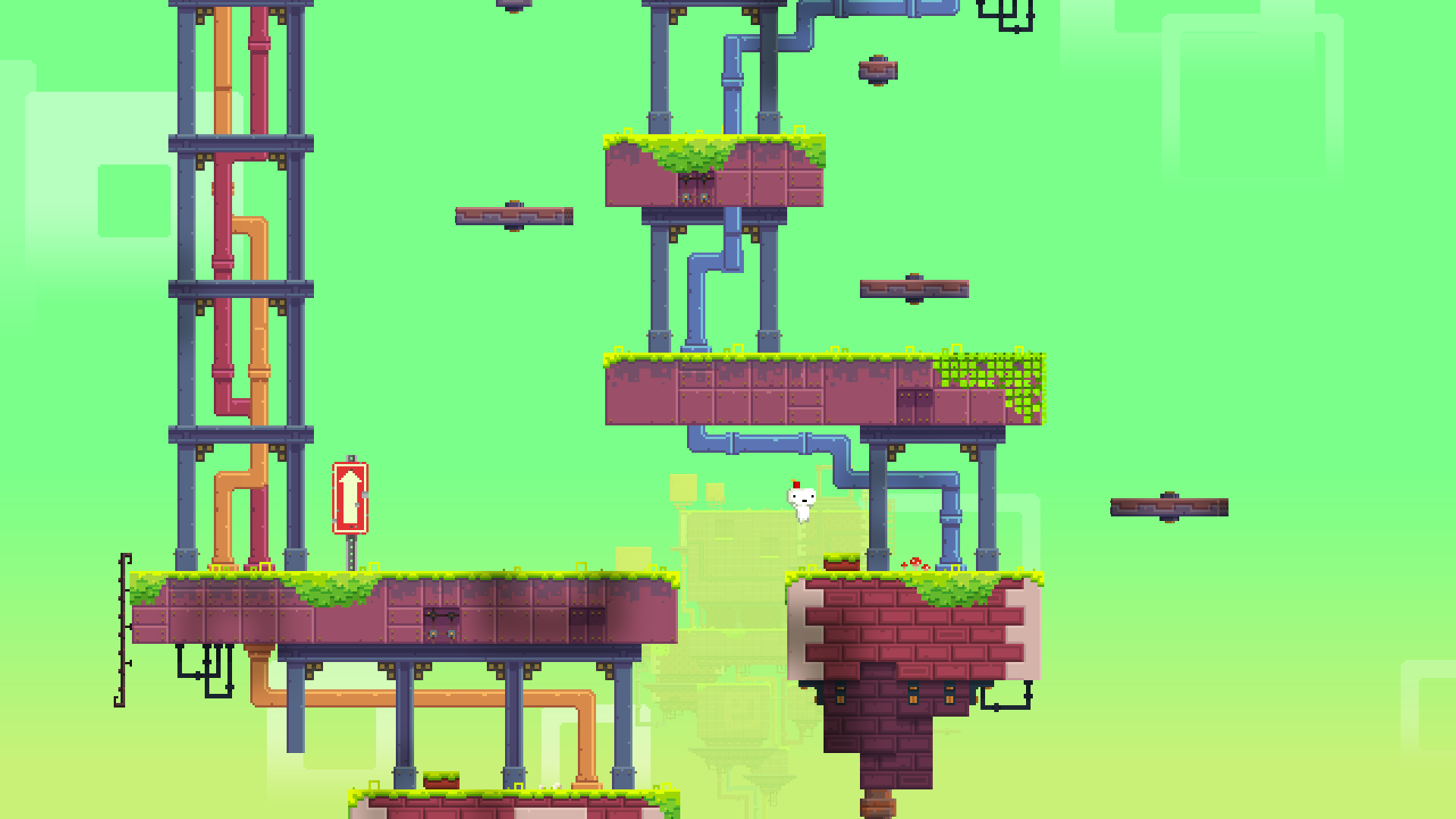 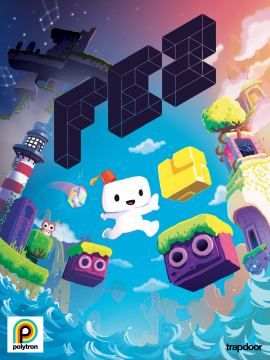 Announced back in the summer of 2007, Fez became one of the more hotly anticipated games during the resurgence of indie gaming (video games made without the financial backing of a publisher) in the late 2000’s, thanks to its very promising core concept and ‘trixel’ visuals, the many delays it dealt with, and its prominence in the acclaimed 2012 documentary Indie Game: The Movie.

Thankfully, despite the trials and tribulations suffered over its five-year development period, Fez released in early 2012 to critical and commercial acclaim. It was even beloved enough to have been cited as inspiration for future indie games Monument Valley and Crossy Road by their respective developers. And despite some issues with the gameplay, Fez deserves to be praised as a clever and enjoyable take on the puzzle platformer genre. 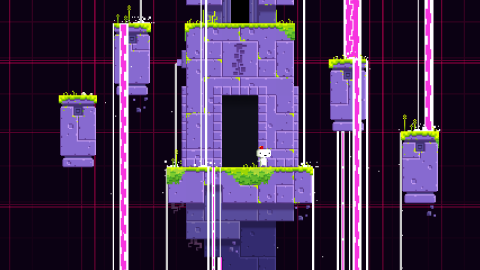 Fez has you playing as Gomez, an adorable white sprite who, along with the rest of his kind, exists on and perceives the world as a two dimensional space. That is, until he’s called up by old man Geezer and given a fez (the little red hat he wears), which shows Gomez that his world is just one of four sides of a three dimensional space, and grants him the ability to rotate the world to one of these other sides and see things from a different perspective.

The game is a 2D puzzle platformer where the goal of the game is to collect 32 mysterious golden cubes, which can be found as complete cubes hidden in treasure chests or 8 smaller cubes that can be found anywhere. To find these cubes, you must explore the world (split up into numerous sections that can be accessed via doorways and warp gates) and solve whatever puzzles you encounter to keep exploring.

The puzzles often revolve around finding a new perspective on a seemingly impossible task, such as rotating the world until vast chasms become easy gaps that can easily be jumped over or linking up a series of disconnected ladders to climb up an imposing cliffside. It’s difficult to explain in words, but it’s surprising how intuitive the puzzles actually are when seen in action. Despite how imposing some can seem, they never become frustratingly obtuse (for the most part). 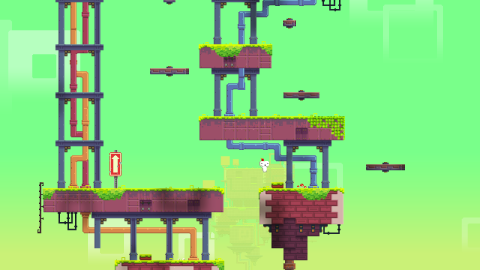 In fact, the biggest difficulty with solving the puzzles can just be trying to wrap your brain around the perspective shifts and figuring out WHAT you’re supposed to be do. When things click into place and you realize it, the feeling is incredibly satisfying and the reward of an extra cube piece, the contents lurking within a treasure chest, or a new area to explore gives more incentive to keep playing.

Even if you are struggling, the game rarely puts any pressure on you. There aren’t any enemies to hamper you, you’re free to explore the vast majority of the world without requirements, and there’s no punishment for dying (you just get teleported back to the last secure place you were standing). Because of this, you’re free to tackle the puzzles at whatever pace you like. Do you need a few minutes to get to grips with what you have to do? Take your time. Are you having issues with figuring out the solution? There’s no problem; you can check out the rest of the levels if you want.

On that note, there’s something to be admired about the way Fez‘s world is put together. You could be checking out a nearby lighthouse for some cube bits when you find a tunnel that takes you to a whole other region, which itself can contain an entrance to yet another region. It gives the act of exploration a sense of discovery that you don’t get from other games, even those crammed with enormous worlds. 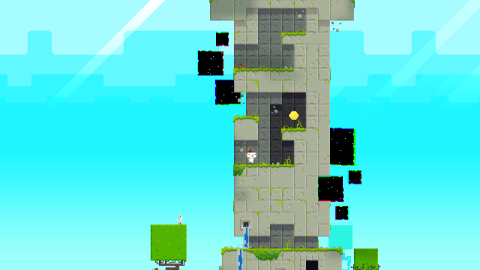 The controls work quite well, with rotation being done with the shoulder buttons/triggers and Gomez himself moving and jumping about responsively. The only real issue here is that your jump momentum can be affected by even the smallest of run ups, and with a lack of air control to correct yourself, this can make jumping across sections with small platforms quite annoying.

For what could be described as Fez‘s first half, where you’re constantly exploring new places, solving a variety of interesting puzzles and collecting cube pieces like there’s no tomorrow, the game is simply a treat. Unfortunately, it’s let down quite badly by the second half. For this part of the game, you’re often backtracking to earlier areas to solve a series of new puzzles that reveal more about what’s really going on, but this doesn’t work as well as it should.

Most of these new puzzles are pretty much wandering into an empty room and trying to figure out what it is you’re meant to do. But unlike the rest of the game, you’re not given a lot to go on here. Sometimes, there’s a devilishly tricky brain-teaser to really challenge what you know, but that’s the exception. Most of the time, you’ll be scanning vague treasure maps for clues, QR codes on walls, or the internet for a cheat code to input; and none of these are clearly explained within the game itself. 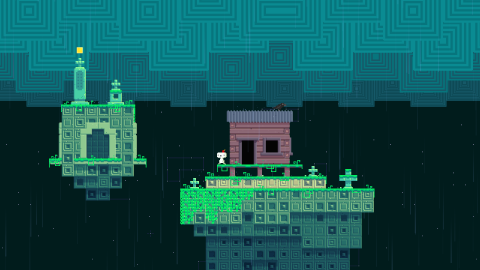 It could be argued that Fez is a game that wants to put a wall between itself and the player’s attempts to understand it. And with its vague, confusing conversations with other characters or your useless helper Dot, the unintelligible writings frequently found across the land, and the few real revelations that can only be described as baffling, there is truth to that point. But when that same desire to deliberately confound the player results in puzzles so impenetrable that the only solution is to look it up online, it makes for a frustrating affair that’s severely at odds with everything else that had come before. Regardless of how much intent should justify the end result, the amount of backtracking that has to be done exacerbates this problem.

While there are secret doors that take you across the world and warp gates that send you to the central area of each region, you’re still going to have to traverse many levels by foot, redoing old puzzles you’ve already done four or five times before in your previous attempt at investigation. This isn’t helped by the fact that the world map could use some improvement. It earns points for letting you see exactly what’s left for you to find in each and every section, which makes it helpful for figuring out what you might have missed, but the cumbersome map design makes navigation a confusing chore that frustrates matters.

What makes this even worse are the black holes that occasionally appear around the levels, which kill you instantly if you touch them. These holes refuse to shift dramatically with the perspective of the world, which can make backtracking something of a puzzle but more often than not just makes it arduous. At the very least, you can get rid of them by leaving and coming back into the level. 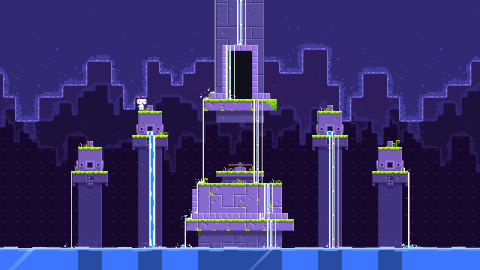 Though there is a noticeable difference in experience between the two halves of Fez, one area that stays consistently good is the presentation. The soundtrack (composed by Richard Vreeland, aka Disasterpiece) uses square synths, which gives it a sound reminiscent of old 8-bit games from just the instrumentation, but the way in which the music is composed and placed within the game is fascinating. Strange noises echo in the background, enough so that while you never consciously recognize it, something unusual is always lurking underneath. Off-putting synth chords and melodies that change pitch mid-note give previously relaxing themes a slightly distressing atmosphere, which makes things more disturbing than if it was more overtly unsettling. It works really well within the game, and arguably does a much better job at communicating the oblique bizarreness of Fez‘s world than anything in the game. (Incidentally, there’s a very nice touch where the notes that play when collecting the small cubes change to fit the key of the song playing in the background.)

The graphics were one of the first things to get Fez public attention, and it’s not surprising given how good they are. The way the adorable sprites contrast with the ‘trixel’ backgrounds immediately demonstrates the disconnect between the 2D plane Gomez exists on, and the 3D world around him. The world is crawling with little details, like bugs crawling about on the ground or stars dotting the night sky. But more than anything, it’s the strong use of color that makes Fez‘s visuals, and that’s not just referring to the beautiful skies you encounter along your travels. The colours of every onscreen element contrasts nicely with the backgrounds, ensuring that you are always able to see whatever you need to see, and the color palettes used for the sky, environments and objects give each region a different feel and atmosphere very effectively. 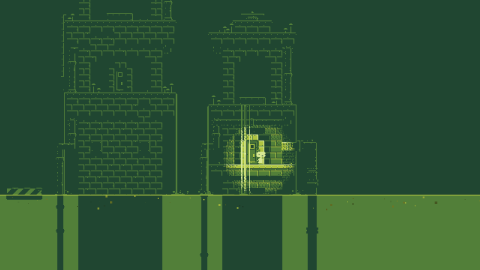 At times, Fez feels like its worst enemy, with its desire to alienate and bewilder. But it’s still a game that manages to impress, awe and amaze through sheer ingenuity, a desire to let the player take their time and great presentation, and those could very well come from that same desire. Whatever the case, the end result still makes for an intriguing and engaging take that fans of puzzle platformers and indie games should check out.

The forum thread where Fez was originally announced – https://forums.tigsource.com/index.php?topic=354.0