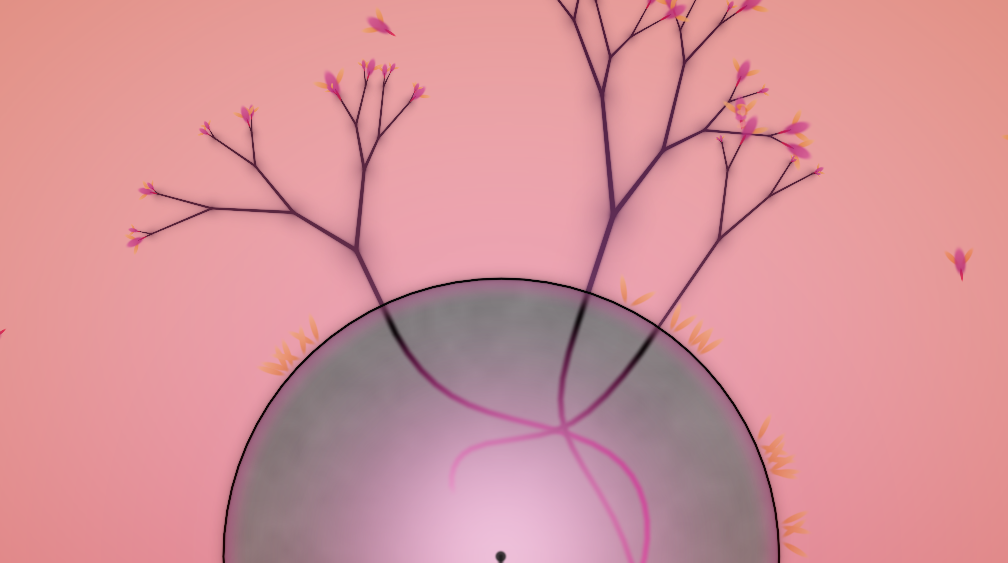 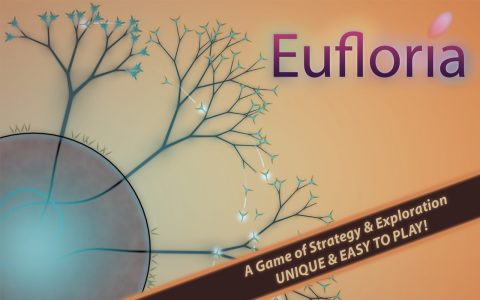 In 2008, a small group of indie developers created a small prototype game named Dyson, after the hypothetical tree that could survive on comets. They submitted that prototype to the Procedural Generation Competition and managed to take second place. Yet the story doesn’t end there. The prototype proved so popular that the developers expanded on their idea, releasing it three years later as Eufloria. And then that version proved popular enough to warrant an HD update of the game three years after that. While its placid horticultural motifs attracted a lot of attention at the time, today, Eufloria stands out for a different reason. As polished as the gameplay can be, it’s hard to appreciate that in light of the game’s overbearing colonial messages. And without even the slightest hint of irony or self-awareness in the delivery of those messages, they will be overbearing. 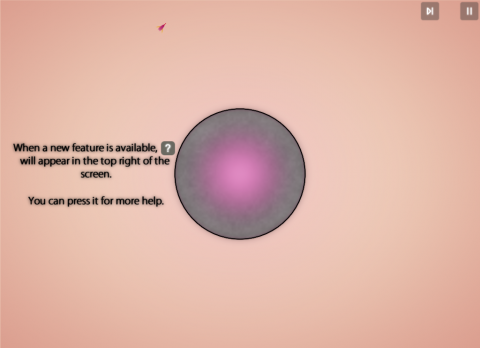 Of course, it would help to understand the context in which Eufloria was originally made. Coming out in late 2011, Eufloria was just one of many games released during the indie boom of the early 2010s. These games were concerned primarily with building upon design principles that mainstream games had already been working with for years. Very few indie games introduced radically new concepts to games or seriously questioned practices the industry had developed by that point. The closest games came to that was in exploring alternate aesthetic styles. Other than that, though, they were more interested in making beloved game genres more accessible to a wider audience. Not that this is a bad thing; after all, the era did produce games like Aquaria, Machinarium, and Super Meat Boy. 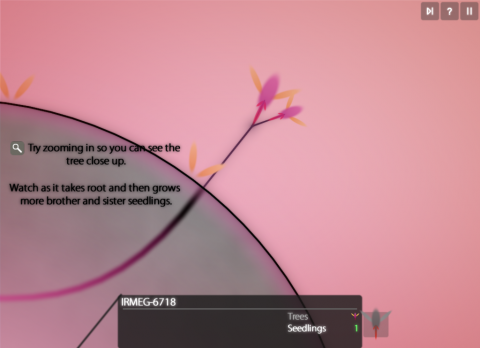 And at least at first glance, Eufloria looks like it should belong in that group. It’s a real time strategy game in which you command large swathes of your arboreal army to conquer the stars, planting trees and fighting enemy plants. On the one hand, Eufloria is built on solid design principles. There’s a flexible set of rules in place that allow for a variety of challenges, and they’re all balanced in such a way that they provide a fair challenge to the player. Yet this isn’t where the game’s strengths lie. Those can be found in the other hand; in the game’s efforts to make an otherwise arcane genre more accessible to a wider array of players. Nowhere will the game demand the frantic APM that a game like StarCraft II would demand. Instead, events proceed at such a relaxed pace that you can play the game with just the mouse. Nor are there a wide array of unit types or tech-trees to worry about. Eufloria employs a minimalist approach to real time strategy, giving you only the barest amount of rules and game pieces necessary for an RTS to function. 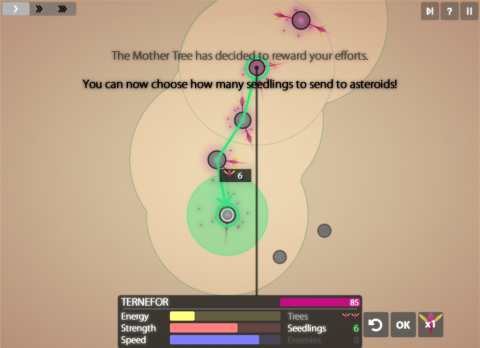 Finally, the screen isn’t visually busy with information, but evacuates almost every unnecessary detail so the player can see the action unobstructed. In fact, Eufloria‘s visual style is understandably one of the game’s more obvious qualities. Its subdued palette of pastel pinks, blues, yellows, purples etc. work hand in hand with the natural beauty of watching plants grow. Your mind relaxes; you find yourself at ease. Combine this with Eufloria‘s previous efforts at accessibility, and you have a game that molds itself to the player rather than the other way around. You have complete control over your own experience, from how quickly (or how slowly) the game proceeds to how challenging the game is for you. By all accounts, the game should be a success. 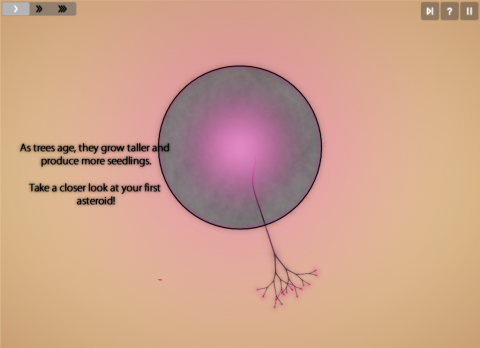 If only that was the case. The unfortunate truth of the situation is that for how well Eufloria demonstrates the strengths of the contemporary indie scene, it also reveals many of the problems that games of this era potentially struggled with. Because of their willingness to accept video game mainstays, indie developers weren’t as poised to avert the problems that those mainstays had led to. In Eufloria‘s case, this leads to a proliferation of references to colonialism. Despite detailing the lives of plants, the overarching story sounds like a generic alien invasion story: you work as a sort of middleman for The Growers, an unseen yet oft-discussed imperial power who task you with planting new colonies on other stars. If that means eliminating any life that already inhabits it (especially the Greys, those vaguely malicious alien entities), then so be it. 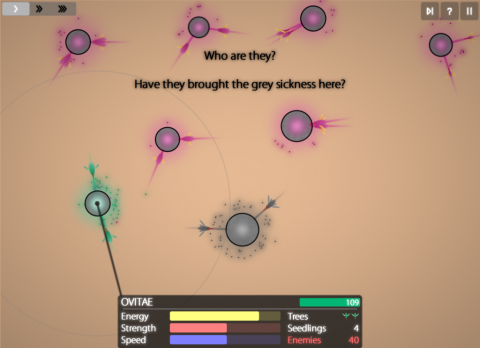 None of this detracts from the game’s quality yet. That honor goes to the game’s wholesale endorsement of colonial practice. It begins by arguing that colonialism is natural. The plants, with their lack of sentience, help in this task, but also consider the actions you’re allowed to take in the game. They’re all violent in nature. You wreck violence against the land by draining it of resources, and you wreck violence against other living beings by wiping them from the face of the universe. At no point can you coexist peacefully with other people or even work toward that goal through diplomacy. The only answer Eufloria offers is violence. The irony, of course, is despite the game’s supposed veneration of nature, it has nowhere near the respect for the natural world it thinks it does. It can’t perceive of anything within the game world as having any intrinsic value, and instead encourages you to look at nature as a wealth of potential resources to fuel your conquest. Planets are just soil in which you might plant more soldiers, and the plants themselves have no no identity outside the quality of the soil from which they arose. Untillable land is worse than land under enemy control; at least the latter can be put to good use. 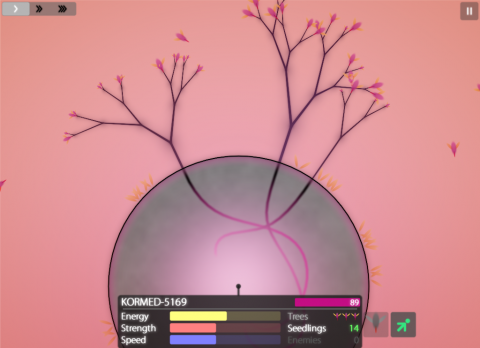 This would explain why the Greys are so heavily maligned throughout the game: they make minimal use of their land and only halfheartedly play the game. Rather than take this as an opportunity to reflect on its own violent nature, Eufloria reads that violent nature into the Greys who brought up the problem in the first place. They’re less than locust to the game. The narration consistently describes them as a sickness plaguing the galaxy, as though their very existence is a problem. (It should come as no surprise that all you do throughout the game is wipe that existence off the face of the cosmos.) True, Eufloria backs away from that message in the end, but only through a predictable last minute plot twist, which is too little too late. It certainly doesn’t help that the game retreats from the implications of that twist not one minute after its delivery. Meanwhile, the game preceding that twist is consistent in its veneration of empire. Individual empires may be bad or unstable, but the machinery of empire itself remains strong. 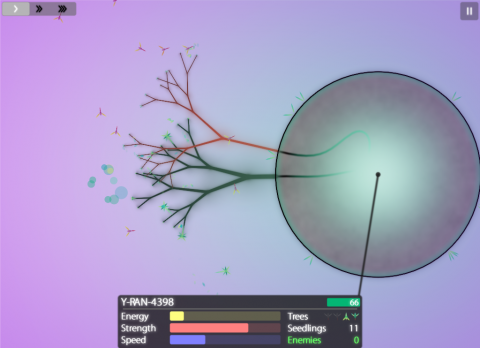 To be fair, not all of these problems are exclusively Eufloria‘s fault. A lot of what the game does is necessary for making a good real time strategy game. It’s just unfortunate that those same requirements work so well toward the game’s colonialist project. Being able to zoom in and out is a tactical necessity, but it also aestheticizes your empire: you can zoom in on individual planets to watch your Dyson Tree (IE flag) take root in the soil and make that planet your own. Or you can zoom out and bask in the size of your ever-growing empire. Other aspects find themselves in a similar position. There’s be something alluring to the grand naval battles that populate your territory, which is how the game is so adept at convincing you to wage further war and increase your sphere of influence. Likewise, although the speed with which planets can flip into enemy hands does open up strategic opportunities that might not exist otherwise (do you make your planet a juggernaut to prevent an invasion, or do you purposefully leave it weak so that the enemy has nothing to utilize when they take it over?), it still contributes to that “veneration of empire” problem for earlier. 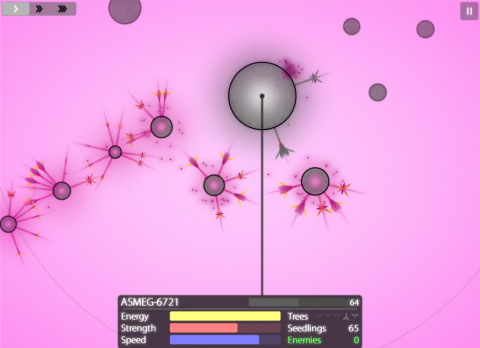 You could say that you can still enjoy the game by ignoring these problems and focusing on the fun of playing it, and in theory, that might work. In practice, though, Eufloria reminds you of these problems too openly and too frequently for that approach to be very viable. It’s enough to make you question real time strategy design if it can so easily and so effortlessly be put to use like this.

Which isn’t to say the game is completely blameless. In fact, a recurring problem throughout Eufloria‘s design is how much its own defenses just don’t work. This even applies in places where you wouldn’t think it would ever be a problem. As much as the aesthetic wants to center the player and free them from their desires, Eufloria‘s design runs counter to that intent. First is the obvious problem of how active the game is, especially later on. In fact, a few set pieces rely on the game setting its own pace, regardless of what you want. However, this speaks to the larger problem of just how willing Eufloria is to engineer desires for the player. A contented player is the worst case scenario for the game, so it frequently presents such a player with more content to work through. There’s always more land to conquer; more plants to kill and expel from their homes. The game doesn’t free you from desire so much as it does sate those desires long enough to keep you playing. In this light, Eufloria‘s aesthetics are little more than a feint meant to distract you from questioning the game and its brand of naturalism. Speaking of which, many of the game’s other justifications fall similarly short. To cite just a few examples:

Were you to judge Eufloria by the standards it wants you to, you’d find the game a model of indie success, both from a financial and design perspective. It demonstrates a strong understanding of game design principles, and it was that understanding that made what was once a small experiment the moderate success that it became. In light of Eufloria‘s faults, however, its successes give pause for question. Is polish the end goal that video game developers should pursue? How much value do design principles hold if they can lead to scenarios like this? Game design should not exist in a vacuum. 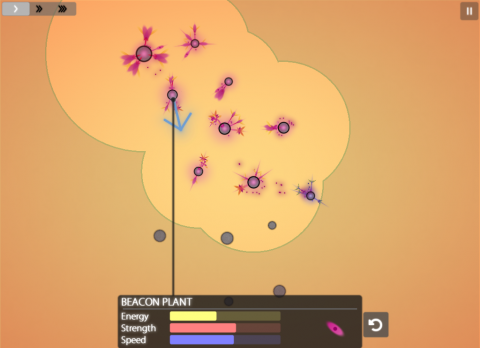