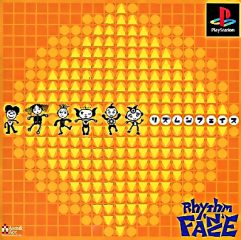 Following his two weird sort-of-adventure games LSD and Tokyo Wakusei PLANTEOKIO, Osamu Sato designed one last game for his PlayStation collaboration with Asmik: A rhythm game called Rhythm ‘n’ Face. After all, Sato does know a few thing about music… and, obviously, this game isn’t just like any other rhythm game around. As the title kind of implies, it’s about drawing faces. 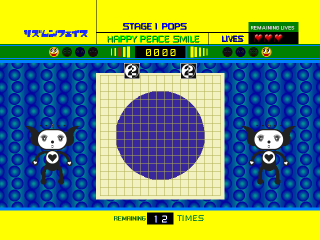 The game’s goal is to recreate the faces of typically Sato-esque creatures shown at the start of the level on a tile grid. You control a cursor which can be modified in size, and shape – either in the form of a triangle, circle or square in a nod to the Bauhaus. There are two characters dancing on the side of the screen: On one side is yours, and on the other is the computer’s. The computer-controlled critter leads the dance by showing the different steps needed to recreate the face, setting the right size and shape as well as the spot where it’s meant to go. Of course, all of these actions must be executed synchronously with the background music’s rhythm – and your cursor should better be when and where it’s supposed to be, with the right size and the right shape! If it isn’t, your input won’t be taken into account and you’ll have to start that sequence over again, losing precious seconds in the process.

The aesthetics of Bauhaus, on which the game is visually based.

Chaining correct input will grant you a combo, but missing will break it. If you miss again, you’ll lose an heart – and losing them all obviously means you’re done. The game does allow for small mistakes from time to time, but you should definitely avoid that though – it has nasty consequences on your endgame score. Indeed… 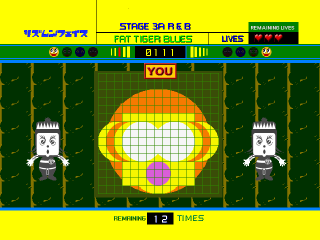 At the end of every level, a score is awarded to you based on two criterions: How well your “rhythm” matched that of the music and your “style” as an improvised face drawer, which are both scored out of 50. Rhythm is just based on how many succesful moves you made, which can be enhanced by taking the risk of making extra moves when you’re leading the cursor to its goal. Style is a bit more complicated: If your face perfectly match the one you were shown at the start of the level, you actually only get a score of 30/50, and a single error basically gets you a 0 – only by going freestyle while keeping the face consistent will you be able to max your style.

Which is far from easy: It’s very complicated to guess how to actually “go freestyle” without messing things up. And well, it’s not the only harsh thing in the game, in top of that… Rhythm ‘n’Face is indeed pretty hard to apprehend: The timing window is rather narrow, and just succeeding a basic input is hard enough to make you completely forget about that “style” thing – when doing what you’re asked is hard enough to make you think your success was mainly a stroke of luck, you ain’t thinking about taking any risk. It’s a pity this game is so punishing, because it had potential. 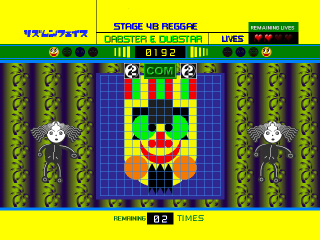 Especially with Sato’s style… and its music! This time, he choose to create a musical ambience akin to that of a weird discotheque, making a dance-oriented kick drum blend with a specific theme for each level. Here goes the playlist: pop, disco, r&b, funk, jazz, reggae, rock, polka, flamenco, bossa nova, techno and ethnic music! That is, in their own revised Sato-house version. The only exception are the music for the bonus level unlocked when you finish all the levels branchs, which are very surprising and daring electro-acoustic avant-garde-ish pieces.

Besides, all of these tracks are evolutive: The stronger your combo, the fuller the background music. And you reallywant to hear these catchy hooks! It’s really sad that the game’s punitive timing ends up kind of spoiling the party: Making faces in rhythm with a funny soundtrack is kind of cool concept, but your combos certainly won’t last for long.

There isn’t much more to say about Rhythm ‘n’ Face. The game aims to be simple, funny and straightforward – which it would probably have been, if it wasn’t so damn hard to approach. The idea’s kind of cool, the weird Bauhaus-influenced visuals are fresh and the soundtrack obviously has its distinctive style, but it wasn’t designed as a friendly enough rhythm game as to be a truly enjoyable experience.

Nowadays, Sato’s company – OutSide Directors – sadly doesn’t make games anymore. It does create iPhone apps though, and one of its latest experiment is a weird drawing tool whose aesthetic basis is very similar to that of Rhythm ‘n’ Face. Its title is equivocal: It’s called ●▲■!