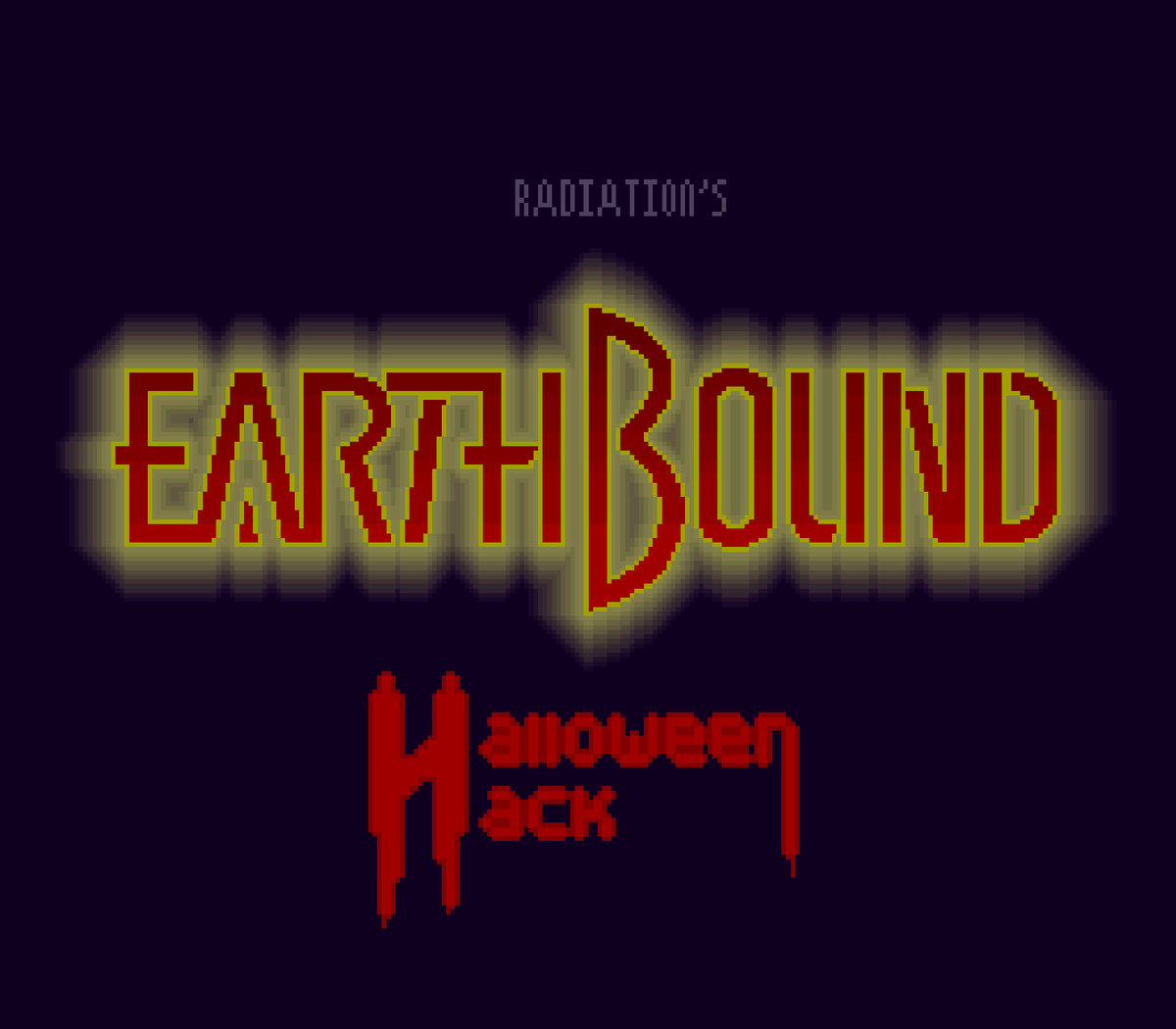 Before the release of Undertale, Toby Fox’s previous work in game development was entirely through ROM hacks. In October 2008, he released one notable Earthbound hack known simply as The Halloween Hack, and it’s gained a good deal of infamy in the Earthbound ROM hack community. Toby Fox has stated that he made the game do a variety of things that had been on his mind, one of those things being that people saw him as “another funny guy”.

Well, this is one way to prove them wrong.

The Halloween Hack is almost like a prototype Undertale in terms of theme, comedy, and tone, though with a much more juvenile style, for both good and bad. The game does feel like a proper Earthbound game in many respects, just for an older audience, with the starting town making jokes about a man’s OCD, or that one guy who dresses like a Mexican stereotype and loudly proclaims it from his roof. Even the main section of the title has a lot of the same quirky sense of humor. But there’s the stench of black comedy and cynicism in the air far more nasty than anything the Mother series could produce, and it’s all very hit and miss, especially the use of profanity in the final boss battle. It’s not hard to see why Toby Fox looks back on this poorly. 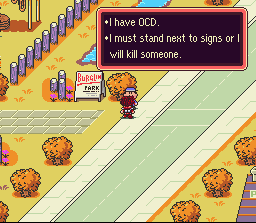 At the same time, it’s a game that doesn’t hold back at all. The build-up in the more dramatic segments is suffocating, the humor is always in your face and will force a chuckle out of you, or just throw you for a loop by making the tone almost incomprehensible, which fits once this starts as the majority of play is in the mind of a grief stricken madman. The story is also pretty strong, taking place in the timeline that the chosen four DIDN’T return to in Earthbound and seeing the aftermath, and it’s not pretty or what you’d expect either. It also makes an interesting decision by casting Ness completely out of the story in favor of Varik, the blank slate lead of the Brandish series. The idea was that you can use Varik entirely as a player avatar rather than a character you already have attachment to, which fits into the running theme of player choice. Much of the story is about how you, the player, react to given situations in a game, including moral ones. It also subverts the meaning a little, highlighting a lack of choice as the running motif. It’s similar to the ultimate message of the genocide run in Undertale, except instead of being a damnation, it’s more focused on why we enjoy games like this in the first place and the sense of accomplishment we get from them. It also suggests that mindset isn’t entirely healthy, unlike Undertale‘s more straightforward messaging after several replays. 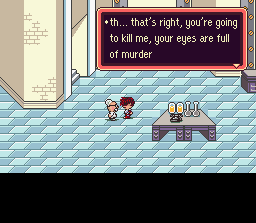 This may be why this game is so ridiculously hard for awhile. Unlike most RPGs, you have to use status magic to survive, casting the right aliment on the right enemy as soon as possible. Otherwise, you’re going to be ripped apart by the abominations here. There are dogs with faces exploding with tentacles, brain worms at monstrous size, regenerating Starmen corpses, zombies, diseased monster bugs, forgotten memories in physical form, literal heart attacks, and all sorts of crazy, disgusting, inventive creatures. They all do a ton of damage, they all have a ton of spell options, and they all have weaknesses to certain aliments you have to take advantage of, even once you start getting your party put together. There are a lot of little design shortcuts thrown in to give you a fighting chance, like a large spawn rate for PP restoring butterflies in really difficult areas, but you have to figure out how to survive alone and outnumbered before you start getting those breaks. 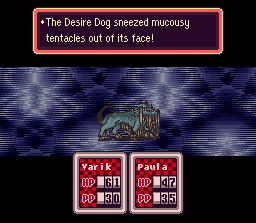 It’s an interesting look at how Undertale became what it did, with little bits here and there that reference elements of said game, and it has a good solid foundation from the Earthbound mechanics. But it’s also very unrefined and poorly thought out in a lot of ways, with Toby Fox knowing how to create themes and play with ideas, but not really knowing what it was all supposed to mean. The ending is a big joke, and it robs the game of the power it had up till that point, which is a shame. But for a late 2000s ROM hack, it’s impressive in a lot of ways. And hey, this is where Megalovania came from, a song so nice he used it thrice. The best way to put it is if Earthbound is an early season of The Simpsons, The Halloween Hack is the first season of South Park. Both have their merits, but one has aged far better than the other because of the difference in maturity between the writers.

Also, if you write a line in a serious dramatic moment in your videogame and it ends up being “tl;dr: eat shit, fagots,” write something else. From the creator of the best game ever GameFAQs tournament 2015, everyone!