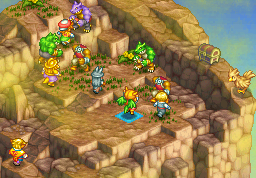 Final Fantasy Tactics A2: Grimoire of the Rift (ファイナルファンタジータクティクス A2 封穴のグリモア) - Nintendo DS (2007)

The setup is essentially identical to the original Final Fantasy Tactics Advance, although focusing on one kid instead of four of them. Here, a boy named Luso discovers a book in his school’s library that transports him into Ivalice. (The librarian is Mewt from the first FFTA, though there’s no real link between the stories other than some cameo characters like these.) Here, he joins a clan, and attempts to discover a way home, eventually by tracking down someone from the villainous Khamja clan with a book like his. A subtle change is that this is not meant to be a “dream” world as it was before – instead, Luso is actually meant to be by the same universe as Final Fantasy XII, though it still takes the previous Advance’s titles more laid back tone. 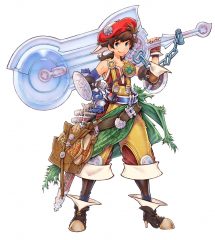 The main character, a regular kid who gets sucked into the world of Ivalice. His ridiculous sword is the same as Marche’s from the original Final Fantasy Tactics Advance.

The head of clan Gully, and the counterpart to Montblanc in the original game, who shows Luso the ropes of Ivalice. He gets incapacitated fairly early on, leaving Luso in charge in the clan, at least until he can heal. Different from the Cid (Mewt’s father) from the previous title.

Full name Adeilade, with the nickname “Adelle the Cat”. She’s a thief in Ivalice and joins up with Luso and team after attempting to swindle them. 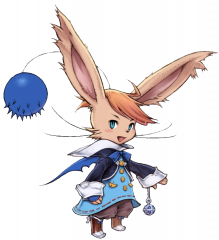 A bard Moogle who joins up with Luso. He’s the brother of Montblanc from the original FFTA, though his name originates from a minor character in Final Fantasy XII. 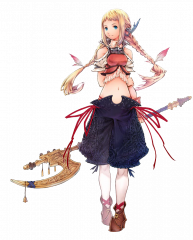 The heroes of Final Fantasy XII appear here as unlockable characters. Vaan as a unique class called the Sky Pirate, while Penelo can take on the role of a Dancer. 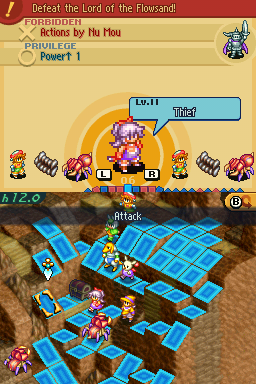 Much of Tactics A2 structure is familiar, but substantially improved over the previous game. Recalling the Ogre Battle games, you take a test at Luso’s school at the beginning, which in turn grants various stat changes and bonuses for when you begin the game. Story items are gone, and taking missions is restricted by clan level instead. Clans now have privileges that grant small bonuses for everyone on the team, which you select at the beginning of a mission. These can then be expanded upon by taking particular challenges. The “world creation” aspect is gone, and instead you cross across a pre-set map of Ivalice, consisting of various territories. There’s an auction house, that lets you bid on items, as well as attempt to claim various territories, an expansion of the concept from the previous game. Dispatch missions are a little more involved since you need to visit various locations and meet with the request person-to-person, rather than just selecting party members from a menu.

The GBA game didn’t have much in the way of missions variety beyond killing all of the enemies – here, for better and for worse, there are more goals, like defending certain areas or escorting NPCs. Some of the missions are also connected via story arcs, which makes them feel slightly more consequential. Along the way, you may come across Vaan, Penelo, and Al-Cid, who can join along as playable characters. (Montblanc also pops up too.) This actually causes another small problem though – since there’s no permadeath and no way to dismiss story characters, they end up taking up too many slots, which could better be utilized for training generic units. 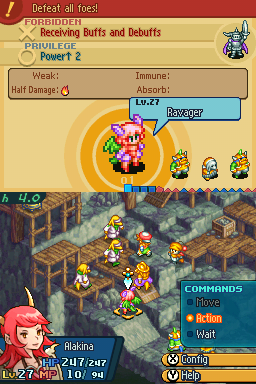 Randomly during battle, characters will also be able to execute single use special attacks. There’s also a Limit Break-esque Smash Gauge, which, when powered up and equipped with the right items, will allow you to summon Scions, this game’s name for the Totema/Esper creatures. (Why they couldn’t keep this terminology consistent between the games is unclear.) Also returning from Final Fantasy Tactics are the trap tiles, which are invisible (without using certain skills) and can cause damage and various effects, as well as ending the turn.

The Law system has been greatly tempered, undoubtedly due to the many, many complaints against it in the previous game. Rather than giving out penalty cards or taking characters to jail, breaking a law will simply negate your clan benefits, as well as denying you items that the judge would’ve awarded you on completion. It also prevents you from resurrecting fallen characters, though they just disappear from the map and will pop back in after the mission is over. With that, there’s no permadeath at all. In fact, it’s even easier than before, since you can resurrect a fallen team member anywhere (presuming the Judge didn’t leave, anyway). The downside to this is that you can’t manipulate them any more – missions have set laws rather than going on a cycle, and there aren’t any ways to rewrite or ditch laws. It’s just as well, because they only affect your party members now, rather than the enemy. Overall, it feels like a patchwork, like someone recognized its issues but felt strongly enough about the concept that they couldn’t ditch it completely. The best that can be said about it is that it’s not nearly as troublesome as before. 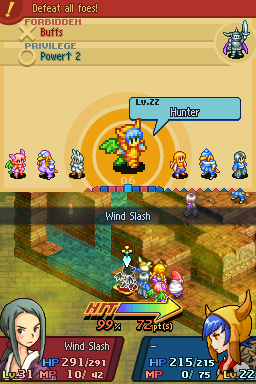 Borrowing another note from Tactics Ogre, each mission begins with 0 MP, and increases with 10 MP every round. This ensures that magic users need some time to build up to use powerful spells, while still keeping them useful over the whole course of the fight. Two new races have been added: the pig-like Seeq, who were introduced in Final Fantasy XII and have even greater physical strength than the Bangaa; and the Gria, who are winged beings that can fly, much like the Winged Folk from Tactics Ogre, though like the Viera, all of their warriors are female. Since the Seeq and Gria don’t show up until later in the game, they only have four jobs each, less than half of the others. Of the Seeq jobs, the coolest is the Viking, with powerful lightning and water powers, while the Gria have the Ravager glasses (called the Bastard class in Japan), which allows tremendous damage with greatswords. Across the other races, the classes and skills have been rebalanced, reducing the strength of Assassins and Thieves, while some new ones have been added. Some of these are amusing but of limited use, like the Moogle’s Chocobo Knight, which gives him various skills depending on the type of Chocobo he’s riding (obviously, there are hard to find). In addition to having skill prerequisites, some jobs can only be learned by first completing certain missions and saving an NPC, who will then teach it to you.

The default difficulty level is still fairly low, though there’s a hard mode available from the outset. The problem with this is that it just increases enemy stats, which is one of those artificial changes that just make it feel more tedious than truly challenging in the ways that Tactics Ogre and the original Final Fantasy Tactics weren’t.

The interface has been greatly improved, bringing back the dearly missed Fitting Room and optimize functions. It also puts the second screen of the DS to good use in delivering pertinent information, including the turn order of the characters as well as the Laws in effect. The visuals are still 2D, but all of the tiles have been redrawn in crisp, colorful detail. Along with the higher resolution text and character sprites, it ends up looking much, much nicer than its predecessor. The overseas version also adds in touch controls.

Much of the music is directly imported from both Final Fantasy Advance and Final Fantasy XII. In spite of the strong sound quality (it’s especially beneficial for the old GBA tracks), this is the game’s biggest weakness, as too many of the tracks arrive with their welcome already worn, if you’ve played the previous games. There are some new pieces, but they aren’t used nearly as often as they should be. 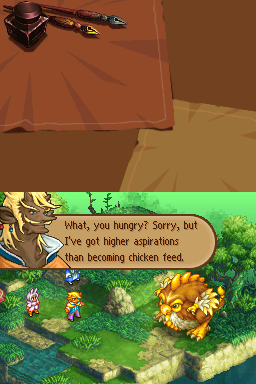 Overall, as the title implies, this is obviously a sequel to Final Fantasy Tactics Advance, with a strong focus on mission conquering and loot gathering. Anyone who was a fan of the original PS1 game and found its GBA spinoff off-putting will still find little of value here. For the most part, it’s an improvement over its predecessor, and there’s enough new and tweaked stuff that prevent it from merely feeling like one of those expansion pack sequels. But without the metacommentary of its predecessor, its story is even more trite and inconsequential, and without a compelling narrative, all it has to offer are hours and hours of more missions to conquer. If that’s appetizing, then Final Fantasy Tactics A2 is fantastic. Otherwise, there may not be as strong of a reason to spend much time with it.