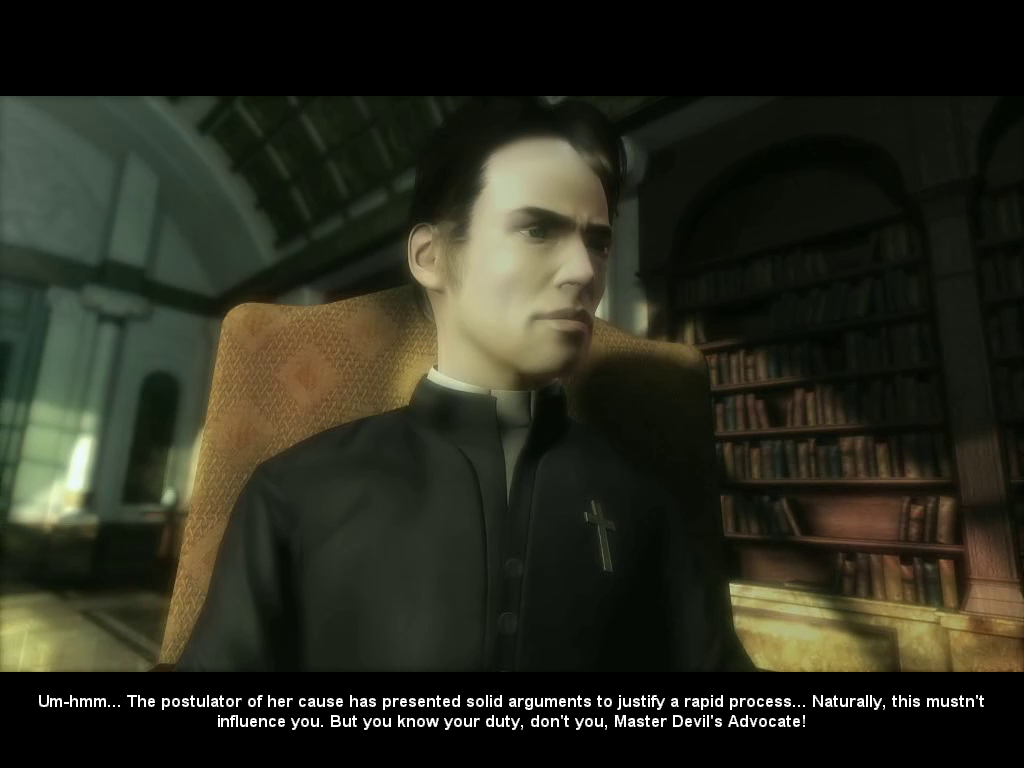 Dracula 3, the series’ only standalone entry, emerged out of the fog a whole eight years after the previous title, created by an entirely distinct developer and publisher combo.  Sadly, the game doesn’t have any clear connections to previous entries, except the general concept of Dracula the arch-vampire, but this game’s narrative would continue into the games that followed.  The old camp style has been swept off the board in favor of an introspective horror story filled with mystery. 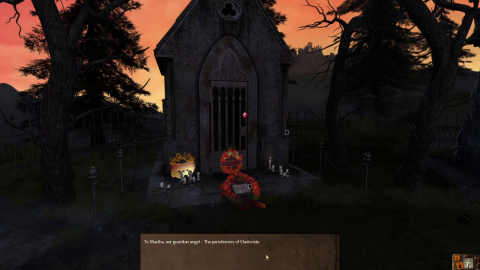 The year is now 1920, and Father Arno Moriani has been sent by the Vatican Congregation of Rites to the town of Vladoviste in Transylvania.  As Devil’s Advocate, Arno’s job is to investigate the potential canonization of a certain Dr. Martha Calugarl, a WWI medic and good Catholic, who continues to comfort the township seemingly even after death. As “Devil’s Advocate” is such a loaded term to modern-day players, Arno emphasizes that he wants Martha to be declared a saint, but it’s his job to make sure the process is legitimate, thorough and above-board.  These are principles he’ll carry with him as the story gradually turns towards vampires: as a former WWI medic himself, Arno has as much faith in science as in god, and it leads him into all sorts of personal introspection and trouble before the game is over.  Arno will have to be careful: the politics of post-WWI Transylvania are turbulent, and the province’s recent annexation into Romania is still a hot-button topic.

Environments in the game are now real-time 3D, but controls are much like the original games, with a similar icon set. Thankfully, Arno is happy to talk about anything worth interacting with, so the entire “No” icon is tossed, and rightly so. Pixel-hunting is reduced to a minimum, though it does occur in a few instances. Most of mechanical changes occur on the subscreen.  Arno’s inventory is a bizarre one: the developers wanted you to sort your own inventory across multiple tabs, and encouraged you to do so by starting all new items in a common pile in the corner, waiting for you to sort them!  Most players simply won’t bother, and will hit the auto-sort button, which probably should have been the default. 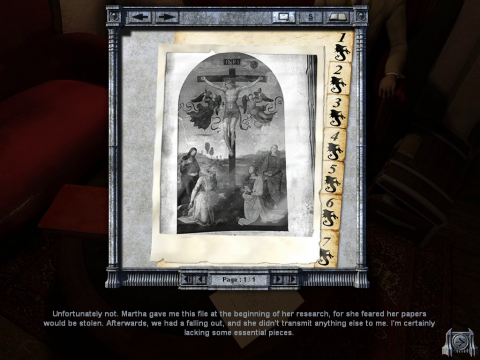 Even more prominent is the dedicated Documents menu. You’ll be doing a lot of research and investigation in this game: comparing works of art for small discrepancies and double-checking text for evidence.  To help keep things organized, the game offers multiple ways to sort your collection, as well as optional tagging features and even the ability to toss old documents if you think you’re done with them (and to retrieve them again if you’re wrong!).  A magnifying glass is provided to take a close look at your documents, and some hints can only be seen under the lens. Unfortunately, the glass is extra-small, and while it’s possible this was period-appropriate, it’s easily the most frustrating element of the entire interface.

A multilingual character, Arno can read foreign documents by hovering over their text with your mouse.  One thing we learn about Arno early on is he has a secret, sacrilegious habit of checking the Bible at random for predictions about the future.  The game represents this by flashing a special button if you visit the Bible in your Documents menu, which will jump your cursor to a particular, relevant passage as you go through the game’s story. To facilitate this, the devs included the entire, public domain Latin Vulgate in the game’s files, though only those specific lines are translated! They didn’t stop there, as later in the game Arno picks up a complete, English copy of Bram Stoker’s Dracula, to boot!

The narrative of Dracula 3 eventually arrives at the titular Path of the Dragon. This element is derived from Dracula 2‘s Last Sanctuary: not a place, but an initiation rite performed by would-be vampires to earn the right for their baptism of blood.  Would-be vampires – and the player – aren’t told how to follow the path, but that they have to understand it before they can walk it.  This general concept carries over to the game’s puzzles, and it’s here where things get subjective. As a rule, Dracula 3’s puzzles follow the same philosophy as the Path itself: you have to work out how to use tools and rituals as a distinct and often complicated step of at the start of a puzzle.  The lack of in-game assistance can be a stonewall, not just in terms of difficulty but boredom, the potential payoff is immense. The game starts with a real-world example, donating blood, and gets more and more arcane as things go on, in every sense of the word.  Puzzles get longer and more complicated (sometimes too long), ending with the final trial on the Path, which involves summarizing information from every previous step in a grand, final puzzle that could have you clapping your hands or pulling out the last of your hair.  A lot of the game’s drama comes from watching Arno balance his faith against his growing sympathy towards his undead foes as he comes to understand them, never sure exactly which way he’ll tip in the end. 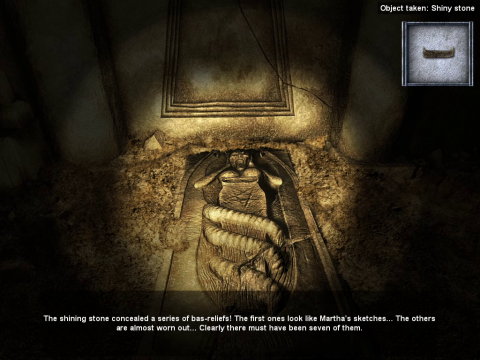 Dracula 3 was eventually ported to smartphones in a series of episodes in 2010, and that version was ported to Steam.  Unfortunately, the result was an open catastrophe. On the plus side, it has native widescreen support and an option to display on-screen hotspots to eliminate pixel-hunting. The inventory is simpler, but the Documents menu loses all its convenient features, and the game uses a bizarre, checkpoint-based saving system, even though it isn’t linear, meaning the saves can vary wildly depending on how you reached each checkpoint. But the biggest problem is the cuts.  Vast swathes of the game were removed or shifted around almost at random to fit the size constraints of its episodic structure.  While Dracula 3 could stand a few edits, especially if the developers were shooting for a casual audience, the port reduced it to digital rubble.  The game does add a single puzzle, but the Steam version changed it further, possibly by mistake amid other minor errors in that port, rendering the puzzle literally unsolvable without a walkthrough.  As a result, this version is widely panned by fans, with the original release on GOG recommended in its place. 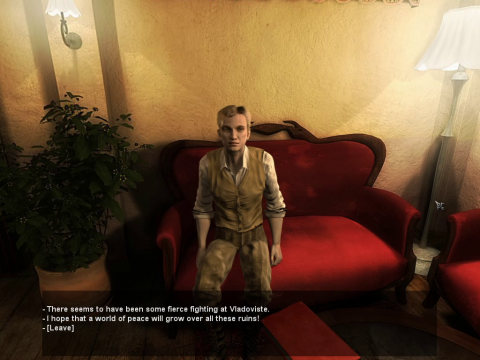 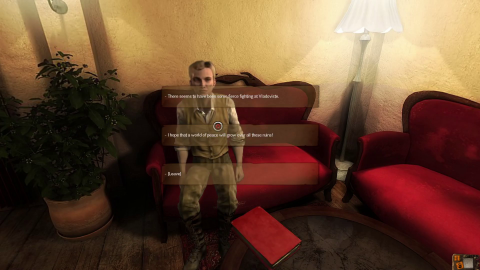 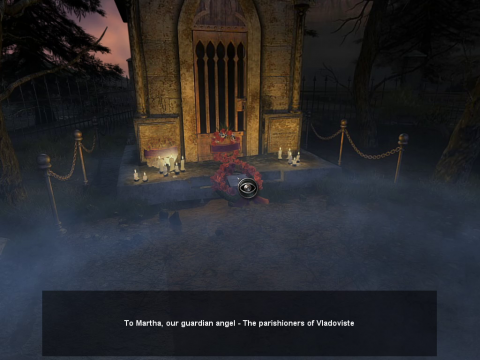