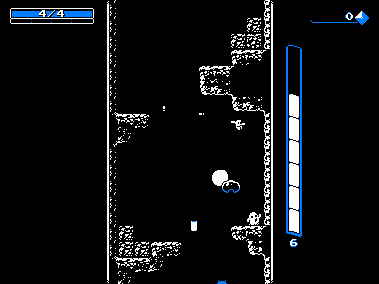 Downwell is a game where you jump into a well and then go down it. Also, there are monsters that you have to stomp on to kill. Except the ones that are solid colored.

That’s why you have gun boots.

Made by a Japanese designer codenamed “Moppin”, and two or three others to help out with sound design and the like, Downwell is an arcade style action game that is unlike anything else out there. It’s not so much run and gun as fall and gun. You move down vertically and shoot monsters with downward traveling bullets in your gun boots, collecting gems and finding upgrades and shops on the side of the well walls. Occasionally, you have to land or stomp on a monster to reload, and as you go, you collect gems that can be used in shot and fuel “gem high,” which makes bullets larger. Every area is divided into multiple levels, and finishing a level lets you earn an upgrade, which are shown to you in threes at random, so you never know what you’ll get. It’s sort of like a rogue-like in this respect, as part of your success depends on getting the items and upgrades you work with the best, except you don’t explore so much as react to all the shit you’re falling towards.

The brilliant thing at work here is how little control the game gives you in just the right amount. You fall, and you have to react. You either get good, or you die. It’s not quite as frustrating as it sounds (though it can be still be quite aggravating) because you unlock new styles of play and color schemes as you go, and the levels are fast to get through. You aren’t losing a ton of progress by losing, and you may get something new to help you out the next go you didn’t have before. Once again, has that sadistic rogue-like replay element, but put in a punishing, arcade difficulty gameplay style. 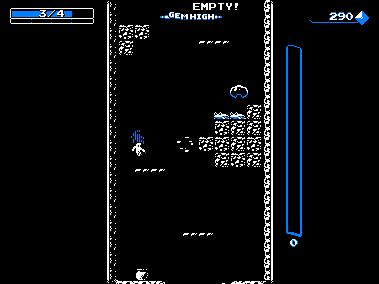 The sprite work is simple and charming, and every new section of the well has a new set of themed creatures to deal with, like the catacombs having a horror theme with bed sheet ghosts and lots of spooky skeletons that will send shivers down your spine. It gives the game feeling fresh, as do the different color palletes you can use. There’s some there for style, and others there for nostalgia. There’s a Virtual Boy style here, and it’s as painful to look at as you’re imagining.

Joonas Turner’s sound design deserves special mention, with some really nice pixelated crunched to each stomp you make, not to mention some surprise sounds from certain enemies (OH GOD THE FLAMING SKULLS). Eirik Suhrke also does some great, simple tracks here. The three do a great job capturing a retro feel, while also standing out with this entirely new take on arcade gameplay.

Of course, this is a game where you will die constantly, and a game this hard is going to be a hard sell for a lot of people. But if you want something to play in your spare time with some addictive play, Downwell is only three bucks. It’s well worth the cost if you have a masochistic streak.