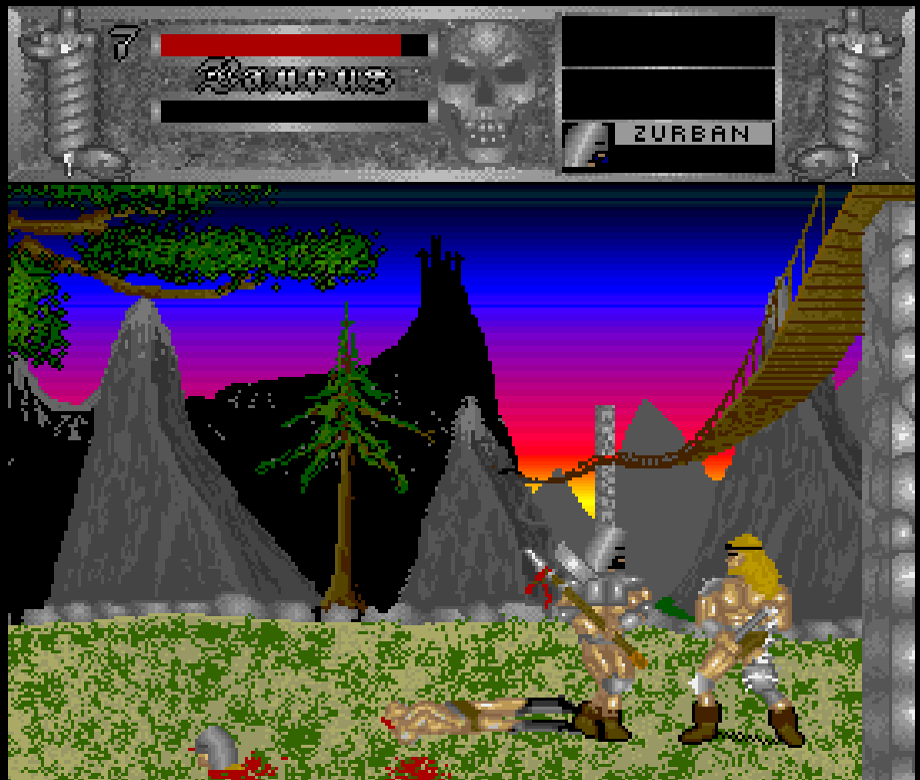 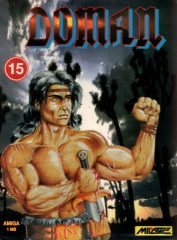 When Warsaw’s Mirage Software released Franko: The Crazy Revenge in 1994, it was clear they wanted to capitalize on the popularity of beat-em-up games like Streets of Rage or Final Fight. What made it stand out, despite its clunky controls and redundant gameplay, was the unique atmosphere of Polish cities of the ’90s, complete with crappy cars and hooligans waiting in the dark alleys for the unsuspecting passerby. Just a year later, Mirage released a similar title, this time getting rid of the gloomy projects in favor of fantasy landscapes straight out of the Conan movies. But did Doman: Grzechy Ardana (“Doman: The Sins of Ardan”) succeed as a budget Slavic version of Golden Axe?

Not much can be said about the backstory. Doman is a barbarian hero, originally appearing in a comic book created by A. O. Nowakowski of the same name. The source material was in turn based on the historical epic An Ancient Tale by Józef Ignacy Kraszewski, retelling the legendary origins of the Kingdom of Poland. So what does the game have to do with ancient Slavic history? Absolutely nothing. After starting the program, we are treated to a short atmospheric intro, with music clearly inspired by Basil Poledouris’ Conan soundtracks. The titular Doman (or his equally muscular friend Baurus) will have to kill hundreds of mooks and finally put an end to the tyrannical rule of Ardan himself. If there’s any game that captures the spirit of low budget sword & sorcery movies, it’s Doman. 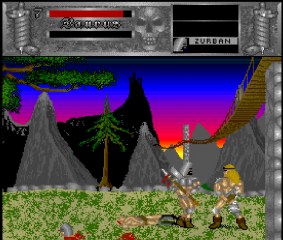 At first glance, Doman: Grzechy Ardana seems to be a simple reskin of Franko. The graphics, despite having the benefit of not being constrained by the dull color palette of grey city blocks (and utilizing a 32 color palette), has the same amateur style. In fact, it almost seems like Franko and the hoodlums he fights are simply cosplaying as barbarians, considering the character sprites are the same size and have the same three or four faces. The only real difference can be seen during the interlude scenes, where we learn that everybody in this realm has a diet consisting of raw meat and anabolic steroids. The developers were most likely going for a gritty grimdark atmosphere, but considering the vibrant and bright graphics Commodore Amiga was capable of, it’s a shame they didn’t utilize the hardware’s potential a bit more.

The levels themselves are nothing special. The various towns, forests, and wild plains all have the same selection of grey, brown, and black, lacking many defining characteristics. The only visual element that might catch your eye is the occasional bright gradient in the background posing as an atmospheric sunset, or some architecture sticking out in the foreground. As the game progresses, the backgrounds become a bit more varied, but once the player enters a given location, it’s not going to change things up too much. One would hope to at least come across some ledges and platforms (not to mention mounts or scripted events) that would break the monotony of chopping up bad guys. Alas, they’re nowhere to be found. There are, however, some occasional encounters with secondary characters, who allow you to choose some power ups and learn background information about the world. They also serve as the game’s copy protection, as you have to input runes found on the pages of the manual to continue. 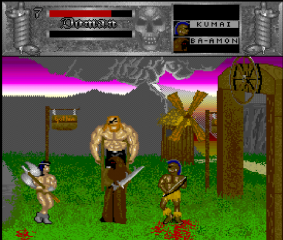 As mentioned before, the gameplay itself is rather monotonous and unvaried, but it’s immediately apparent the developers wanted to improve on the clunky controls of Franko. Not much is changes in terms of inputs, but there seems to be a less significant delay and accidental inputs are less frequent. One addition that you’d expect from a grimdark fantasy game about barbarians is decapitations, and there’s plenty of those. If performed at just the right moment, one spinning attack can result in a bloody death of any of the basic enemies. Upon closer inspection, it seems the spinning animation was lifted straight from the Commodore 64 classic Barbarian, where it had a similar effect. It does, however, feel much more satisfying when performed on much bigger sprites in large quantities. The developers didn’t stop there, though. Aside from the traditional decapitation, the player can perform a strong vertical attack, that results in the enemy’s head being split in half. Unnecessarily gruesome? Maybe. Incredibly entertaining? Absolutely.

The bloody combat becomes even more satisfying once the character acquires other weapons. For instance, the spinning attack normally requires very specific positioning, since the animation moves the player sprite in either left or right. However, when performed with the two-handed axe or the morningstar, the character stays in place, which makes luring enemies very easy. To prevent the game from being too trivial, there are enemies armed with crossbows, which can hurt the player from the other side of the screen. Throughout the five available levels, our hero will have to fight various henchmen, whose names might bring to mind characters from Robert E. Howard stories or the Cthulhu mythos. Unfortunately, it doesn’t matter if we’re fighting with an armor-clad soldier or a menacing looking hooded wizard. They all use the same assortment of weapons, only requiring a varying number of hits to be killed. On the bright side, the enemies can occasionally perform the same insta-kill moves as the player, which means a certain level of caution is required to succeed. 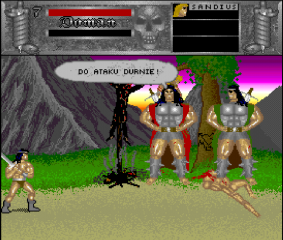 Doman is, at its core, a very simple beat-em-up, that nonetheless has its very unique charm. Where it falls short with its limited budget and muddy graphics, it makes up with surprisingly fun combat and a unique atmosphere that couldn’t really be found in a fully professional product. It’s an artifact from a time when former Eastern Bloc countries were just beginning to open up to the vast world of gaming culture, and young developers began to try emulating what seemed most attractive to them. Doman may not be as well-known as Franko, but it’s proof Mirage could improve on their simple concept and create an enjoyable product. It may not be on par with more well-known beat-em-ups, but it surely can bring some mindless fun for a few evenings. Of these two games, Doman is definitely superior.