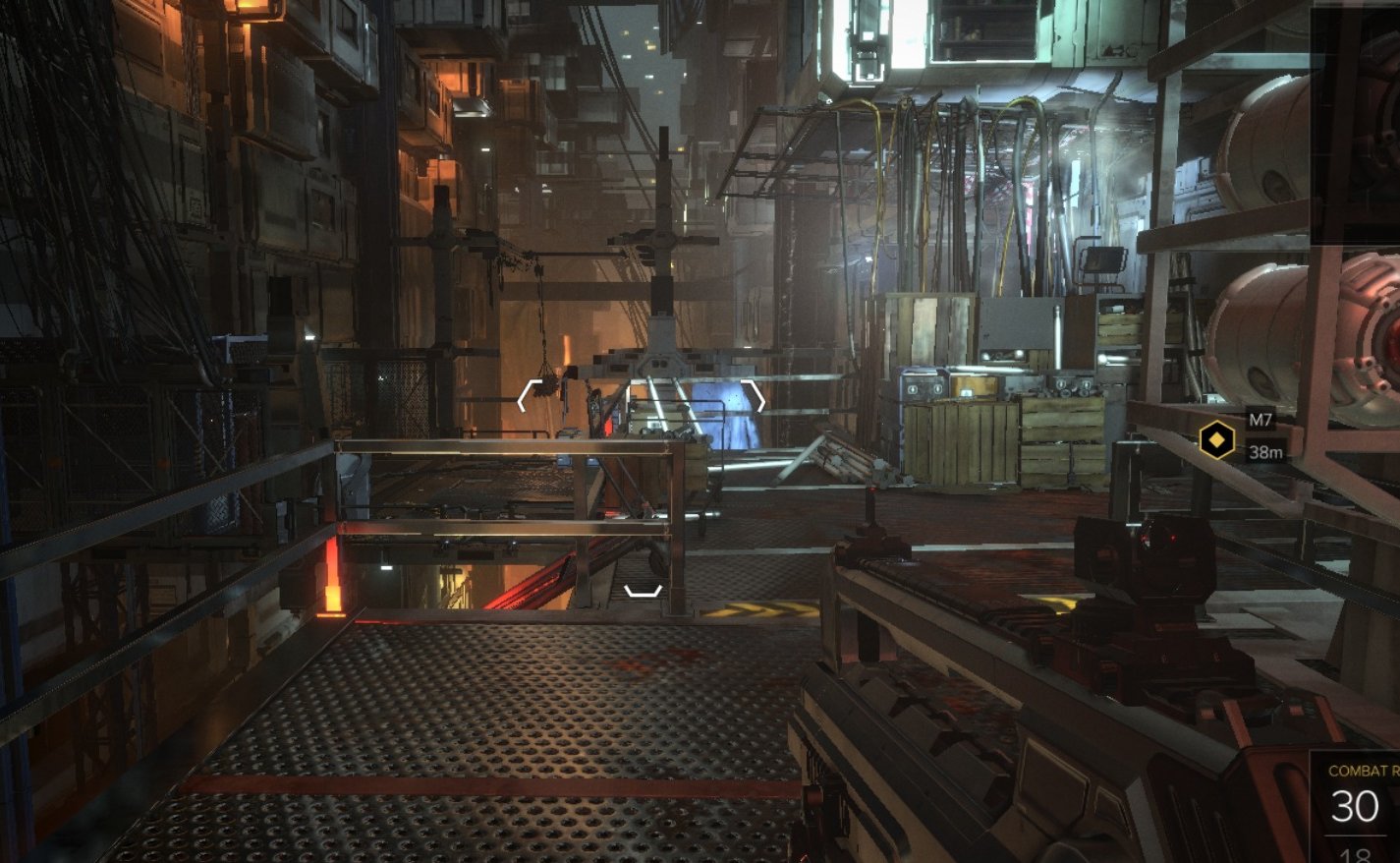 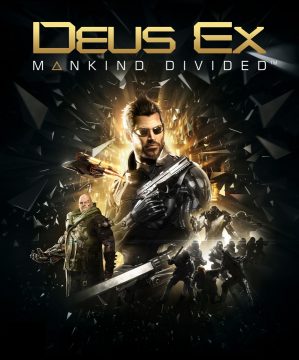 Mankind Divided is a direct sequel to Human Revolution, although (like Invisible War before it), it assumes a combination of different endings that isn’t really possible to achieve. The player once again controls Adam Jensen after his mysterious survival of the destruction of Panachea. Adam Jensen now finds himself in the role of a double agent: working with an Interpol task force which fights against the rising threat of terrorism and collaborating with the anarchist hacker group known as Juggernaut Collective. The conflict is related to the aforementioned discrimination of augmented people who after the events of Human Revolution become second-class citizens, feared and hated by the media, the governments and the general public. Jensen’s Interpol job will cause him to investigate activists from Augmented Rights Coalition accused of multiple terrorist attacks but like in every Deus Ex game, the real enemy is pulling the strings while staying outside of the public view. 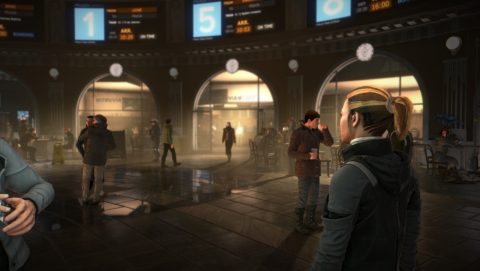 Despite being released four years after Human Revolution, Mankind Divided does not differ drastically from its predecessor. In fact, the core gameplay is almost exactly the same: stealth, cover-based shooting and hacking work the same way they did in Human Revolution. Persuasion has been slightly improved by changing how personalities work: each character now exhibits traits of two different personality types, with one or the other becoming more pronounced as the conversation goes on and you having to act accordingly – this requires you to pay more attention and adjust your strategy instead of sticking with the first option which gave positive results. The levelling has been modified by giving you experimental augmentations which require you to disable some of your other abilities unless you want to experience glitches not unlike those in a memorable Human Revolution boss fight. This forces a bit more specialization, although there’s one sidequest with a reward that will allow you to enable everything without consequences in the endgame. On top of it all, a rudimentary crafting system was added but it’s simplistic, forgettable and ultimately pointless (it boils down to collecting items known only as “crafting parts” and making a usable item when you have enough of them, there’s nothing more to it).

When compared to Human Revolution, changes introduced in Mankind Divided can be described as “one step forward and two steps back”. The core gameplay, while very similar, features a few noticeable improvements – not only is combat handled better, the game consequently allows you to avoid it for a completely non-lethal playthrough, allowing the use of persuasion and takedowns to deal with the bosses. On the other hand, the game’s technical side is much less polished with lengthy load times, significant framerate drops (even on high-end hardware) and a mouse/keyboard UI that’s both inconvenient to use and inconsistent (e.g. you can use keyboard to type computer passwords but not codes on keypads). 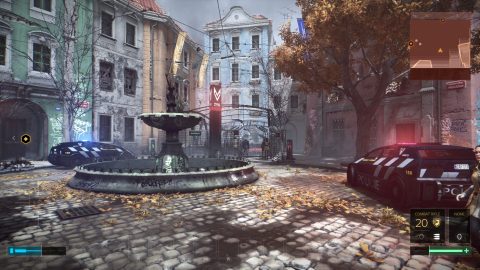 The biggest problem is that the main storyline doesn’t really go anywhere. The game has multiple endings (and this time they’re not based on a last-minute choice) but they don’t feel like endings. Almost none of the important plot points get resolved: we don’t learn the ultimate fate of the augmented, we don’t get to choose between Interpol and Juggernaut Collective and we never confront the people behind the conspiracy. The game is obviously setting the stage for the sequel but it provides so little closure it ends up feeling underwhelming.

The disappointing nature of the central plot is really jarring when compared to how well Mankind Divided builds its world through level design and sidequests. The bulk of the game is set in a dystopian version of Prague (it’s the game’s only major hub level, although there are a few missions set outside of it) and it actually looks and feels like Prague, despite the fact that most of (written) in-game Czech language looks like a machine translation. The dystopian aspect evokes both racial discrimination (e.g. segregated trains) and the communist period (curfews, corrupt police, underground press) and the way it evolves throughout the game is not unlike how the situation got progressively worse in the first Deus Ex. The game more or less completes the transition from interconnected hub-levels to large open world and it does it very well with its three interpretations of dystopian Prague (conflicted and uncertain during the day, loud and dangerous at night, and extremely hostile and oppressive under curfew). Most of the sidequests are stories of people trying to deal with government oppression, with the most memorable one making you provide forged documents to augmented people to help them avoid deportation to the nightmarish Golem City (a ghetto for the augmented and also one of the game’s best levels). 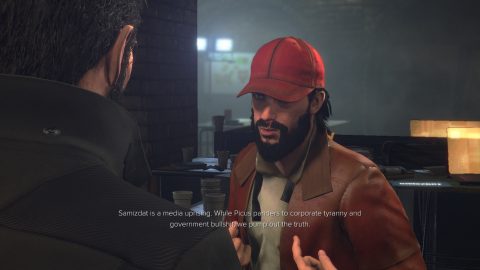 Mankind Divided features some interesting characters, although – just like the main story – many of them end up feeling underdeveloped in the end. The conspiracy theorists who run the underground newspaper Samizdat are very memorable but the same cannot be said about your fellow Interpol agents. In the game’s first mission, you have an optional task of saving one of them when he’s surrounded by a large number of enemies who’ll kill him if you’re not quick enough. While there was a very similar scene in Human Revolution, the one in Mankind Divided carries much less weight due to how little the player knows or cares about the character whose life is in danger. You will meet interesting people during the course of the game but most of them will be met during sidequests – stories of supposedly important characters usually seen cut short.

While the game’s soundtrack is still very good (although it could use a bit more chorale tracks as those were the best ones in Human Revolution), the same can’t be said about the graphics. While the environments look good (in part due to great level design), the motion capture seems exaggerated and artificial. More importantly, the game lacks a distinct visual identity – while the previous game’s golden haze wouldn’t fit Mankind Divided’s darker tone, there’s nothing that could replace it. As the setting is also shifted from high-tech, expensive and luxurious to poor, dirty and hostile, there’s also less futuristic devices, spacious interiors and shiny new augmentations seamlessly connected with the human body. As a result, there’s no iconic image that could be associated with the game – the heavily armored police and segregated trains just don’t do the trick (although the game does have one neat idea when it comes to police and segregation – if your ride a train meant for “naturals”, you’ll get an unskipabble cutscene of a cop berating you and checking your documents). 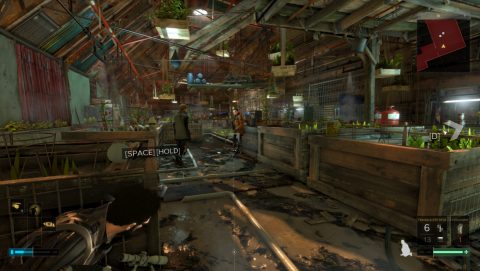 When it comes to things that make the game worse, microtransactions deserve a special mention. In a single player mode, it’s possible to buy in-game money or Praxis (basically levels) with real money. This is completely avoidable, although the very idea of a mainline Deus Ex game letting you buy those things is laughable. In addition to that, there’s also a multiplayer mode called Breach in which microtransactions function the same way they do in mobile free2play games: they let you avoid repetitive grinding by paying. To add insult to injury, Breach mode is nothing but repetitive grinding – it’s a dull score-attack mode set in a stylish yet mostly empty virtual reality in which your objective is to download certain amount of data (which boils down to finding glowing monoliths and pressing ‘E’) in the shortest amount of time while fighting or avoiding a few basic enemies. Breach mode is a completely pointless addition to the game and it’s nowhere near an adequate multiplayer mode – it’s obviously a quick way to earn microtransaction money in a game for which the players had to pay full price anyway.

Mankind Divided is still a great game but it feels like a wasted opportunity. It’s built on the strong foundations of Human Revolution but beyond that, there’s just not enough to it. From a narrative standpoint, it’s a game with many interesting ideas that simply aren’t given enough time. When it comes to gameplay, it is a slightly improved Human Revolution – but improvements to the mechanics are hampered by technical issues. 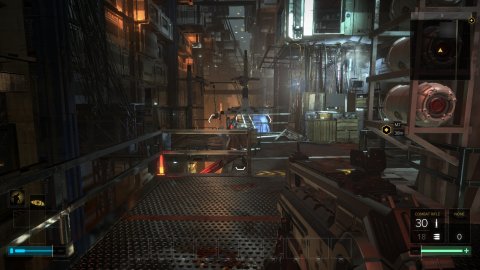 The game seems to be the victim of its own marketing machine. The popularity of Human Revolution provided the incentive to make not one but two direct sequels, the growing trend of adding microtransaction to AAA games resulted in the addition of a half-baked multiplayer mode, the focus on console releases made the PC port less polished than it should have been, and the completely different approach to graphics (focus on realism and polygon counts as opposed to Human Revolution’s stylized look) gave us something that doesn’t look good enough to justify how much it demands from the hardware. Those criticisms are nothing new for the AAA business but it’s a worrying sign for the series because while the spirit of Deus Ex is still present in the game, it’s clearly affected by the negative trends in the industry.

Even before release, Mankind Divided managed to cause some controversies. After its announcement, an aggressive preorder campaign was launched, promising to release the game a few days earlier if enough people decided to buy it. The campaign got cancelled because of the backlash but then the game got delayed for about half of a year, making everyone wonder if the promised early release was even possible. Then, the pre-realase materials in which the discrimination faced by the game’s augmented people was presented similarly to real-world racial discrimination caused a heated debate: is the game making social commentary or is it just trying to profit from hot-button political issues without thinking about their consequences? Just before the release, the perfect storm was completed with the news about the inclusion of microtransactions and the lack of review copies for the game’s PC version. This, combined with general technical issues and lack of enthusiasm over a game that didn’t seem drastically different from its predecessor, led to weaker than expected sales.