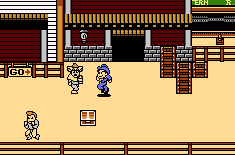 Konami’s Ganbare Goemon series was a remarkably goofy, incredibly prolific series involving two funny little guys rampaging around feudal Japan and beating up bad guys with lethal pipes. The series only occasionally got exposure in North America, probably due to the fact that they were just too Japanese – the main characters were based off folk heroes no one outside of Japan really knew, they ran around ancient towns and cities that were practically unpronounceable to the average kid, and the whole thing was just a little bit too weird.

Cowboy Kid, developed by an obscure company called Pixel, and published by Visco (in Japan) and Romstar (in America), is a remarkably perplexing case. It is, essentially, a revamped version of Ganbare Goemon 2 for the Famicom, given an American friendly makeover by setting it in the Wild West. 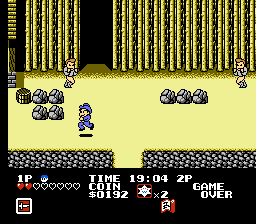 It’s not EXACTLY the same game, to be sure – beyond the obvious graphical and musical differences, the levels and bosses are all completely original, and various mechanics have been tweaked. But it’s so suspiciously similar one might guess it to be a bowdlerized version was rejected by Konami and secretly shoveled out to another company. Even if that theory is wrong, it certainly seems to share part of the same staff. The graphical style is almost identical, right down to the goofy expressions of a bad guy when you pummel them, and the physics are almost completely identical.

The game supports two players at once, with player one taking on the role of cowboy Sam, and player two filling the shoes of Little Chief. In the brief introduction stage, the hero(s) find themselves elected sheriff(s) of the city, and are tasked with hunting down six different criminals. These are an assortment of Western movie stereotypes – Wild Wolf Chief, an Indian; Slash Joe, a knife expert; Billy Morgan, a gun master; Mad Brothers, a hulking duo; Coyote Jim (named Crusher Kong in the Japanese released), who chucks barrels, and Keith, who commands a hawk. 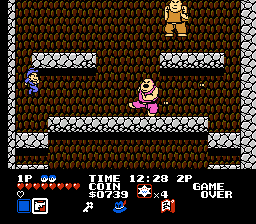 As in Ganbare Goemon 2, the action is not strictly 2D, and takes place on a belt-scrolling field, traditionally the realm of beat-em-ups. The stages are non-linear, and usually require some exploration to find a key, or otherwise hit some trigger that will open up another part of the stage. Killing enemies will grant a bit of money, and the landscape is littered with treasure chests, also giving money and occasionally other items. A few areas change up the perspective, with some areas being purely 2D side-scrolling areas with some platforming elements, and another stage taking place entirely on horseback, playing like an overhead shooter.

There’s also a bit of an RPG aspect, since there are many houses you can enter. Its inhabitants will discuss their plights and occasionally give you hints on where to go next. Shops are abound, where you can purchase health-giving food, and assorted ancillary goods. There are also a handful of minigames, including a “test your might”-type game, a first person shooting gallery, and blackjack. Some levels also have hotels, where you can elect to stay in three different types of rooms, with varying costs and health restorative benefits. Outside of some necessary items that need to be purchased, most of these elements are not mandatory, but they give a bit of depth and add some color to the game world. This is especially true considering that the English text is actually well written, complete with period appropriate slang and cliches. 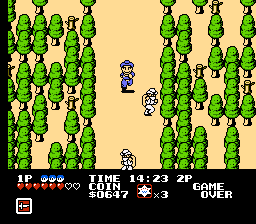 The game never gets quite as ridiculous as the Goemon games – no robot sumos or anything – though it still has a light-hearted comical tone. The light hearted soundtrack helps, which is catchy, albeit repetitive. It was an early work by Masaharu Iwata, often known for working with Hitoshi Sakimoto, later on acclaimed titles like Ogre Battle and Final Fantasy Tactics.

Where Cowboy Kid most differentiates itself from Ganbare Goemon 2 is its weaponry. In Goemon 2, weapon upgrades were often found everywhere in treasure chests, though its strength would be downgraded after getting hit. In Cowboy Kid, weapons are persistent – it’s yours to keep, even after getting a Game Over – but you need to find them first. You start the game with a knife, which is a bit silly considering how few cowboy heroes went around stabbing people. It’s not until the second stage where you can find a gun. Up until that point, the game is somewhat frustrating, with all of its mandatory close combat, combined with its off-kilter hit detection, resulting in lots of unfair hits. Once any of the projectile based weapons – which also includes throwing axes and boomerangs – are obtained, the game becomes quite a bit more manageable, although the boss battles are often still overtly long and annoying. 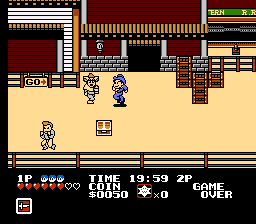 Strangely, there is a stage select for the first six level, but it’s advisable that you play them in order, solely to find the weapons. Some of the later bosses are practically impossible unless you’ve found a gun. After completing these six stages, you move onto the last level for a showdown against Scorpian Master.

The original power-up system from Ganbare Goemon 2 would’ve eliminated these issues, but that’s the only major problem with Cowboy Kids, which is otherwise a fairly decent action game. To an English speaker unfamiliar with its origins, it’s certainly unlike most typical side-scrollers. And despite it being an unabashed clone, it’s also a darn good one. 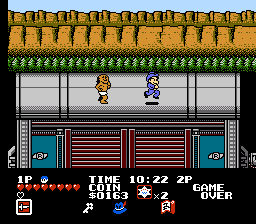 Unlike its Japanese counterpart, Cowboy Kids was actually released in North America, though its print run was very low, and it remains one of the pricier NES titles in the territory.