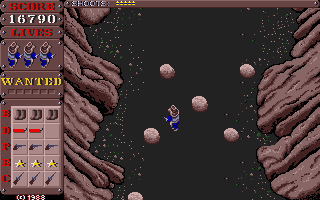 This entry is part 2 of 3 in the series Gun.Smoke
Gun.Smoke

Infogrames’ Wanted was another blatant clone of Gun.Smoke, but unlike Desperado, it wasn’t officially adopted into the franchise. Yet its hardly distinguishable from its role model, as it follows the same structure, has the same kind of enemies, the same kind of brutal difficulty and even the same power-ups. Shooting works different though, as the accommodation for the Amiga joysticks’ single button now gives the gunslinger added bullet streams with each gun upgrade. Fully equipped, he can shoot two bullets in each of the three directions, which means he’s holding and firing six guns at once.

There have been other tiny “innovations” with the upgrades: Explosives can now be stacked up and used with the Space bar, a sherriff star increases the lethality of your bullets and the horse is replaced by a shield that simply grants temporary invincibility. 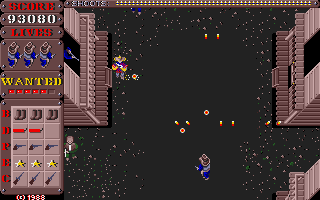 Unfortunately, Wanted is not a very good clone. The first four of the five stages can be selected in any order, but difficulty progresses steeply between them. Otherwise they all look the same, feature the same four enemy types, three of which only differ in looks, and all drag on for much too long. Music is oly played on the title screen, all you hear during the game are the scratchy screams of your victims and the sound of gunfire. Whereas Gun.Smoke was already bastardly hard, the final stage in Wanted is just simply humanly impossible. No, really: The enemy AI is semi-randomized, and the final stage will put you into positions where it’s not possible anymore to dodge all the bullets coming at you. They call those modern shooters bullet hell, but at least there’s always a way. This is true hell.

The ZX Spectrum and Amstrad CPC versions released as Outlaw in the UK by Players Premier are even worse. The standard walking speed is now excruciatingly slow, bullets hardly do any damage and the sound effects are gone entirely. At least the stages are colored differently and thus are now somewhat distinguishable from each other. They’re also much shorter. The C64 port, on the other hand, is very close to the 16 bit versions, aside from making the villains on the wanted posters more offensive racial stereotypes. 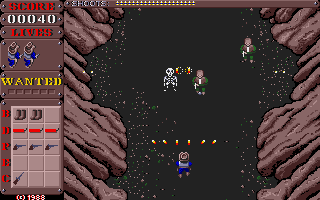 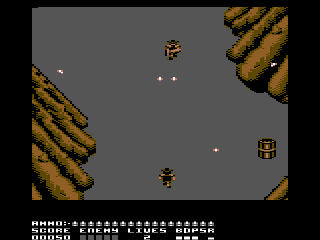 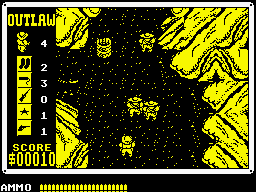 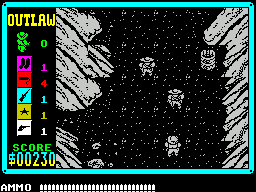 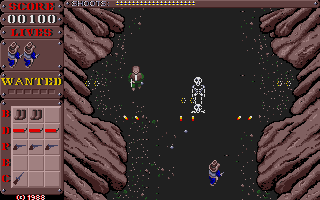