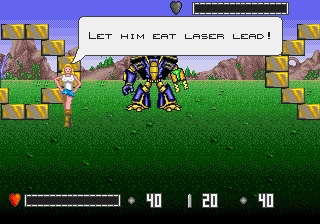 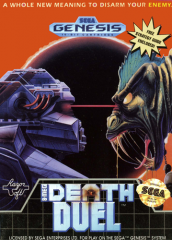 A complete blip in the history of gaming, RazorSoft left the scene just as quickly as they entered. Almost all of their output was simply ports of other games to Sega consoles, such as forgettable Euro-platformer Stormlord, or bringing Tongue of the Fatman to the Genesis as the wretched Slaughter Sport. The one thing their games usually had in common was going for more blood and sexuality than most other console games of the time, even by Sega’s more lax standards. Death Duel, one of the company’s final releases, as well as their only original title, is certainly no exception. While it’s hardly the perfect swan song to their odd career, it does make for an interesting idea, at least.

Sometime in the far future, nine of the galaxy’s major super powers have the Federation’s trade routes under siege. Direct warfare remains out of the question, forcing the Federation to use their one remaining option. Mecha pilot Barret Jade is sent to meet each empire’s representative in single combat, with the stakes for victory being the continued existence of the Federation itself. In gameplay terms, this translates into a series of one-on-one battles against a variety of monsters and robots, each one getting more difficult to dispatch. It’s sort of the concept of Nintendo’s Metal Combat, if it was designed entirely by high schoolers.

The game takes place from a first person view, in which you’re facing towards your opponent at all times. Your control is placed into a reticule, which can be moved to either side of the screen to strafe left or right. By pressing the Start button, you can also bring it into an aiming mode, letting you shoot at a larger area of the screen at the cost of your movement. Each of the face buttons on the controller fires one of the three weapons you have equipped, with weapons mapped to the A and C buttons firing in a leftward or rightward arc, respectively.

As the game makes very clear in its intro, simply unloading your weapons into your opponent won’t be enough to bring you victory. Instead, your general strategy is to destroy their various appendages. Taking out their legs, for example, will prevent them from moving, while destroying their weapon systems will prevent your foe from using them against you. While you usually don’t have to completely dismantle your opponent, doing so will make It easier to destroy whatever it is that’s holding them together, in most cases, their head. Being thorough will also earn you bonus money at the end of the duel. However, organic opponents will regenerate lost limbs if you take too long, so it’s best not to waste too much time or ammunition during a fight by continually blowing away appendages.

While some opponents are more aggressive than others, you’ll also have to deal with the projectiles each of your enemies fires your way. Since your mech is generally too slow to dodge out of the way of these attacks, your best option is to either destroy whatever weaponry your opponent has on them, or use the barricades scattered around the arena for cover. While the barricades can be helpful for protecting yourself, they often assist your opponent just as much. Oftentimes enemies will hide behind these structures where none of your shots will be able to reach them, forcing you to strafe away from them and wait for them to come to you. This is where keeping mindful of the firing arcs of your weapon matters, since there’s nothing quite as annoying as watching one of your expensive weapons smacking right into a wall.

Between duels, you’ll play through a shooting gallery bonus stage, where you’ll be able some extra cash on top of what you recieve from your fights. The Phaelee you earn gets put to use in the weapon shop, where you can select from and purchase a variety of options to use in your next fight. There’s a fairly wide variety of armaments of varying price, power, and quantity, from cheap and plentiful machine gun ammo, to outrageously expensive homing missiles. Unfortunately, the weapon balance is a little skewed, meaning there’s only a handful you’ll generally need to stick to. Grenades are difficult to aim, so they’re rarely worth it, while the pair of weapons that slow down your foes are situational, at best. On top of this, you’ll need to set aside some cash to repair your ‘bot between fights, or risk taking extra damage from enemy attacks.

When you put all this together, there’s actually a fair amount of strategy involved in the dueling, Powerful weapons generally give you less ammo to work with for higher prices, meaning you’ll have to watch your aim and your budget in equal measure to succeed. There are some neat foibles with the actual foes, too: Your first opponent is a dragon, and taking out its wings first will prevent it from constantly hovering away from your shots. A robotic combatant encountered later will use its good arm to reattach its other arm if it’s destroyed, making target selection paramount. While none of the foes encountered are ever quite as unique or as interesting as the ones in similar games, there’s enough tricks to know that it makes learning how your opponents function useful.

If there’s anything that really makes Death Duel stand out, it’s the presentation. There’s a rather juvenile sheen to just about everything, as if the entire game just leaped straight from the notebooks of a dozen bored teenagers. Limbs explode off of organic warrior with a surprising amount of gore. The lady who appears before each battle to motivate you is wearing a tight tank top, her nipples clearly showing. It certainly can’t be called tasteful, nor has it aged well, but it is notable for just how much a game could get away with before Mortal Kombat truly took off.

There’s also the somewhat infamous sequence when you lose the game, probably more well known at this point than the game itself. After the reaper appears to take your fallen pilot, the game lets you know. in no uncertain terms, exactly how badly you’ve failed, just how much of a disgrace you are for daring to fail, and what consequences your death will bring to your family and your empire. It’s a text scroll so harsh it rivals the AVGN’s profane take on NES Friday the 13th’s Game Over screen. Somewhat surprisingly, this turns out to be a far more interesting conclusion than the game’s actual ending, in which a seemingly topless woman promises a sequel that never came to light.

While the presentation is unique, it only somewhat makes up for the relatively substandard graphics for the era. The enemy sprites are rather small for the massive creatures they’re supposed to represent, and the backgrounds are generally pretty barren. The still scenes, such as the weapon shop, are usually drawn fairly well, however. The music, sadly, is pretty weak all around, with none of it actually playing during the duels themselves. The game’s few pieces of music are composed entirely by that harsh, electrical sound that too many Genesis composers relied upon.

While most of RazorSoft’s output was pretty lousy, it’s a real shame that this is the game that ended their career. While it has issues, it’s an original title with an interesting concept. Perhaps if the company had lasted just a little longer with games like these, they could have turned their fortunes around. It makes for an interesting look at another side of Genesis gaming: Crude, violent, and unpolished, and yet still capable of ending up on store shelves. There’s a certain earnestness there that should be respected.