Darkside Story looks and feels like one of those beat-em-ups that tried to ride on the popularity ignited by the genre’s success at arcades. In some way that is true, but it’s also a representative product of mid-1990s in South Korea, when their video game industry saw a birth of countless developers who would go on to produce a number of games for their market in the coming years, with varying degree in quality. Their first steps were usually tracing the titles by big names they’re familiar with – in Darkside Story’s case, it was the coin-op side-scrolling brawler. Influenced by public interest toward its kind, Sonnori marketed it as an answer to their demand for games from their own country, as well as a faithful experience of smashing fun on PC. 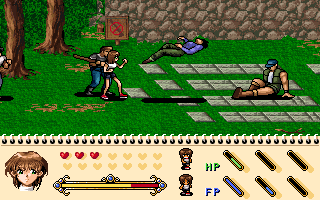 Despite the title, Darkside Story is anything but dark or gritty. Instead, it tells the story about a young schoolgirl Suhee, living with her parents in unspecified Korean suburb. One day, however, she finds out her father left his dental clinic and never came back, with his nurse babbling about his abduction before she collapses to the floor. Confounded, she decides to investigate his disappearance personally, ready to kick the local baddies if they’re getting in her way.

Darkside Story is a fairly traditional brawler. The fighting mechanic directly takes over from Capcom’s two-button system, so anyone familiar with their games would be comfortable with this one. The game runs a bit sluggish on default setting, but this can be easily fixed by tinkering with option menu. Unlike many other beat-em-ups, Suhee is the only character you take control over, so this game is strictly single-player only, which would already throw many off. Fortunately, the game compensates this by giving her an extensive moveset, most of which is very much useful. She’s capable of practical maneuvers such as kicks or uppercuts, and desperation moves that wipe out nearby foes with a cost of small chunk of health. There’s also a downward slide kick that deals extra damage to downed enemies. With some practices, it’s possible to combine these moves to pull off a chain of combo, adding a great layer of versatility. Some of the more powerful moves, however, are available when you grapples the enemies. She’s no piledrive performer, but since it’s the safest way of damaging without risk of counterattack, you may want to grab them as many as possible. 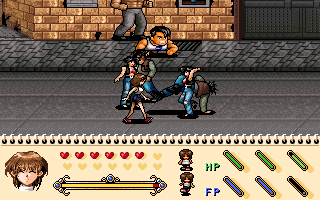 Additionally, there’s an unusual stat management system, denoted by two parameters displayed on the interface named “Hungry Point” (HP) and “Feeling Point” (FP). Hungry Point is essentially akin to the one seen in the RPGs, as it slowly drains the health unless you replenish it by eating foods on the ground. Feeling Point is a flexible meter that relies on Suhee’s performance, related to how successfully she lands her attacks on the enemies. If these two parameters meet certain condition, it changes Suhee’s stance signified by her face – “angry” if both are below 1/3, or “happy” if both above 2/3 – and unlocks extra moves that deal insane damage. It’s a nice bonus you’ll look out, although given its strict requirement, it’s pretty difficult to activate it on purpose. 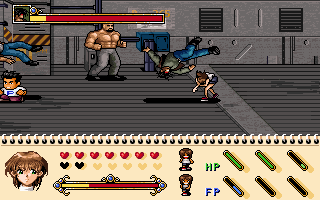 Darkside Story has a kind of hub stage that connects the levels, not unlike the openworld Kunio-kun games (specifically River City Ransom). The prologue is a bit obtuse, as you can’t access the first stage until you do certain actions in order (hint: after her father goes missing, go check behind the sofa in the leftmost house), but after that it’s pretty straightforward. If lucky, you may find the secret rooms where you get hidden skills from the martial artists, who are actually Akira Yuki and Terry Bogard in all but name. Otherwise, this part goes underdeveloped. You can look around Suhee’s neighborhood and chat with people, but ultimately there’s little reward doing so. The prototype screenshots in advertisement showed item slots for Suhee, which indicates there may have been shop system planned at one point, but this is not implemented in the final version. 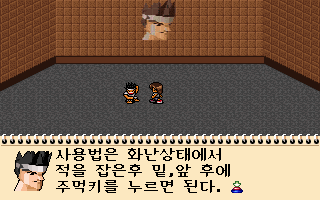 Now, when it comes to beat-em-ups, the plot is usually the least thing to care about, often involving kidnapped girlfriends or something. In Darkside Story, there’s a lot more going on than that, and it’s actually the highlight of this game. Suhee’s journey is full of ridiculous, nonsense incidents that have little to do with her quest, as if the developers were poking fun at the genre. The gist is that Suhee is too distracted to locate her father’s whereabouts, and often ends up punching unrelated (but not exactly innocent) people for misleading reason. At one point, she infiltrates mafia’s hideout and beats up their boss who’s rumored to despise her father for money matters… only to learn the “debt” is merely a couple of bucks, and her father needed it because he had to empty the bowels. Later, she’s engaged in foiling the plan of evil mastermind who enslaves people with his foul breath. 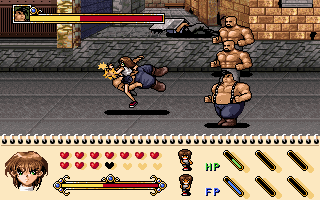 Over the course of the playthrough, you’ll meet deformed alien P-mans, who’re actually creator avatars and warn you not to pirate their game. They occasionally join the fight scene to assist you, but they often do useless actions like raiding dishes on the ground (which you have to stop by hitting them) or showing off push-ups. There’s also a robust neighbor named Calchi, who’ll lend Suhee a hand if you pass his challenge to win the fight against himself. He chickens out after beating a level, however, excusing he shouldn’t steal the spotlight as Suhee is the main protagonist of the game, then asks her a favor to keep all the player’s dreams alive by conquering the game for herself, fair and square. He’s kind enough to give you health upgrade for that, at least. The ending sequence, where the supervillain finds his long lost mother in part of weird soap opera, is a spoof of real-life television program Ujeong e Mudae. 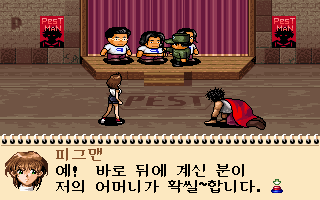 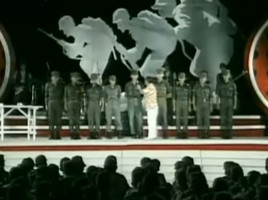 It’s a hilarious game all around, so it’s too bad the game runs out of steam halfway through the game. There’re only so many types of enemies this game can offer, and there’re no hazards or weapons to speak of that could’ve kept this game from becoming quite tedious after a while. The combat also gets surprisingly tough for such a light-hearted game, and Darkside Story has some tricks under its sleeves that’ll give you hard time staying alive. For one thing, this game has a habit of pouring out enemies at once, six at most. It can put you in sticky situation where you can’t just hit anyone without being interrupted by another, as their AI is very aggressive and always chases you immediately.

This is made worse by that, of four levels Darkside Story has, the later half drags on way too long, and won’t let you move on until defeating dozens of enemy waves. The fourth level is particularly excruciating, comprised of a maze with many dead ends, causing a huge waste of time if you’ve picked the wrong road. The boss fights are significantly harder than anything else, usually exploiting combo that temporarily incapacitates the player character and beating them senseless. Granted, this is negated by the fact that you can find tons of health extensions level by level, so the game becomes more manageable as you make progress, but even they can be gone quickly if you don’t pay attention. 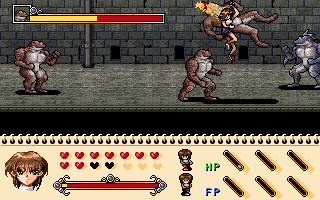 It should also be noted Darkside Story doesn’t give you lives, continues, checkpoints or anything at all. Once you’re down, it simply sends you back to the very beginning. Coupled with aforementioned difficulty spikes, this seems like a blatant way to screw over the player so that it takes numerous attempts to actually beat the game. All of this total up to a game that is reasonably balanced at first, but becomes more and more exasperating to play. The game has built-in cheat codes to artificially circumvent this issue, though, activated via DOS prompt command.

Graphically, Darkside Story is not as vibrant as Capcom’s works, but it nicely captured the looks of the ’90s Korean suburban, although it could’ve used more colors than brown and gray. The characters look somewhat weird at first, drawn in rough, squashed manhwa style, but they come with their own funny quirks, like waste pickers launching trashes from their back or hippies doing silly hip hop moves. The sound is generally more miss than hit. The composition is alright, but the sound card renders them into abrasively scratchy music that does little favor to ears. There’re also a lot of voice clips, battle cry and such, though mostly stolen from The King of Fighters.

Darkside Story is quite decent if you consider it was produced by a barely experienced developer (Sonnori’s only previous work was rather substandard RPG Astonishia Story), but at the end of the day, the game is merely average even at its best moments. Suhee’s expansive moves and some oddball system are refreshing, but it’s still too thin on contents to stand against a plenty of contemporary games that offered more and better than it. Still, Darkside Story was really meant to be an alternative for those who couldn’t afford consoles and their games, and its goofy, absurd plot helps it stick out from bazillion other beat-em-ups (most of which is unfortunately lost on non-Korean audience). Put in that context, Darkside Story received favorable accolades at the time, and is now considered something of a cult classic. 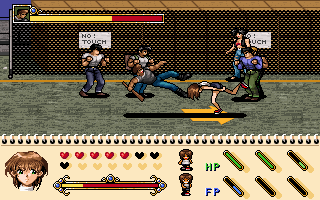 Darkside Story was to have a sequel with transition to 3D environment, but it was cancelled for unknown reason and the game was doomed to obscurity ever since. That was hardly Suhee’s last appearance, however. In 2005, Sonnori re-released Darkside Story on Windows, bundled under the complication Romance of Package to celebrate their 10th anniversary. It’s a straight port without any enhancements, and introduced some questionable oddities, like the interior walking speed being atrociously slow. On the bright side, the soundtrack has been enhanced with redbook audio, completed with new vocal song at the credits. 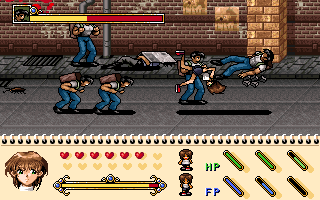 In the same year, Sonnori also ported it to the mobile under the name Darkside Story R. It was one of the launch titles for short-lived cellphone service GPANG, a mobile platform specialized for gaming, utilizing resources beyond normal cell phones (think Nokia’s N-Gage). Judging from what’s available, it appears to be a straight port from the original, although the music is mostly absent. Darkside Story R was initially announced in 2002 as an exclusive release for then-new Korean handheld GP32, but this version was never materialized, even though they eventually launched their other remake, Astonishia Story R, on the system. Interestingly, the artworks used for this specific version were provided by Park Jeonghoon (a.k.a. SeeD), mostly known for his works for casual golf simulation Pangya series. 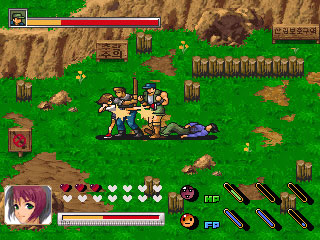 Another mobile version was released in 2007, dubbed Darkside Story M. The resolution was scaled down to fit the small standard cellphone but, unlike GPANG version, this port was entirely built from the scratch. All the graphic assets were redrawn to look better, and Suhee’s special moves was touched up with fancy effect. Much needed save feature was added here, and the status meter was changed to have numeral display on it. The game was also extended with additional cutscenes and new sidequests.

Suhee herself also made a couple of cameo appearances in other Sonnori games. She appears as one of the recruitable secret characters in Forgotten Saga. She’s also presented as a player model in multiplayer first-person shooter Oh! Jaemi. 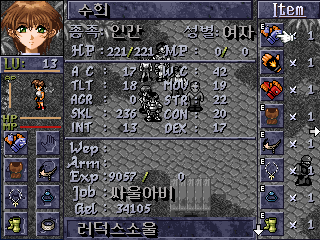 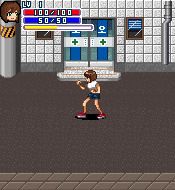 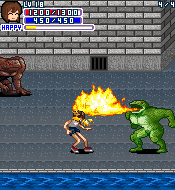 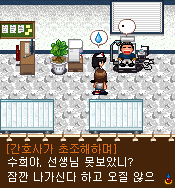 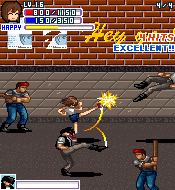