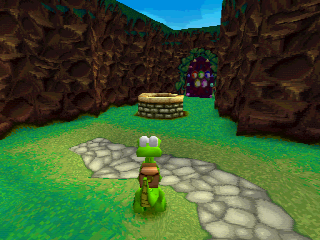 Croc is a standard 3D platform-game with quite a turbulent history. The developers of the game, Argonaut Software, may ring a bell. They were the folks that helped Nintendo to create the first Starfox game in 1993, as well as its (eventually cancelled) SNES sequel. Around this time, Argonaut Software was still working with Nintendo to develop a 3D game, the embryo of what would eventually become Super Mario 64 (or at least the game engine behind it). At the same time they were also working on their own 3D platformer, and pitched it to Nintendo as a game with Yoshi in the main role. Nintendo rejected the project despite the game showing promise and the design document for it already being about as thick as a phone catalog. Exactly how all this went down is hard to know for sure since we only have Argonaut’s word for it, and we probably will never know exactly why Nintendo decided to reject the game. Argonaut Software, already very frustrated with the unexplained cancellation of the more or less finished Starfox 2, decided to sever all ties with Nintendo and make the game using an original character. And that character was Croc.

Croc is a small crocodile baby that has washed up on the shores of the kingdom of the Gobbo people. The Gobbos are cute fluffy little creatures and Croc is immediately adopted by their king Rufus. Time passes and Croc eventually grows into at least thrice the size of an adult Gobbo. It’s around this time that the kingdom is invaded by Baron Dante, a gigantic lizard-like creature. Dante and his followers capture Gobbos for their own amusement and takes over the islands of the Gobbo kingdom. It is now up to Croc to save the day by jumping pits and hazards, save the Gobbos and eventually take on Baron Dante himself.

Croc may look childish and colorful but it’s actually quite hard. The 1-up/health system is borrowed directly from Sonic the Hedgehog, only instead of rings, Croc has crystals. The crystals acts as protection and are all lost when you take a hit. However, compared to Sonic, the crystals are much scarcer, fly farther, and disappear quicker when Croc is hit. It’s an exercise in frustration to try and collect a 1-up, which happens when you hold 100 crystals, which are then immediately traded in for a new life. Beware, though, because if you get hit by something immediately after collecting a life in this manner, it counts as if you have zero crystals and you immediately perish.

There is quite a variety of secrets to find. In addition to the usual hidden areas that give you extra health and 1-ups, there are also six Gobbos and five colored crystals to find. The five colored crystals are used to open a door usually found near the exit of the levels. Behind these doors are usually the sixth Gobbo of the level, while the other five are found in cages. When all six Gobbos in a set of levels have been found, a secret level is opened.

Secret levels are more like labyrinths than the regular linear levels. The objective is not to simply make it to the end, but to find a hidden puzzle piece. After finding all eight pieces in the game, an additional island is opened on the map. This island provides a quite surreal collection of areas from all around the game and a final confrontation with what appears to be Baron Dante’s immortal soul. After defeating it, the player is simply presented with a NES-era style “congratulations, you won” message and the game starts over from the beginning.

Despite being a somewhat traditional platformer, there are some really creative levels in the later part of the game. Here, Croc must navigate Baron Dante’s fortress. Each level has a particular gimmick, puzzle, or Guardian that Croc must overcome. Particularly inspired examples include Platform Pete, a giant blue blob-monster with a hammer who can move the level around to his will. This forces the player not only to keep an eye on where they are jumping but also to look at Pete’s control panel to see where/when the platforms will move next. Another example is Ballistic Meg, a super-fast monster that must be avoided while making it through her lair. Meg is fast but tires quite easily, giving Croc some time to escape. Meg’s spikes and speed may be a sly dig to the blue hedgehog himself.

A decidedly less fun example is the Dungeon of Defright, as it consists entirely of puzzles and mini-games. The level itself is quite easy, but if you want to rescue all the Gobbos, you need to win every single mini-game, and start the level over from the beginning if you fail.

At the time of release, Croc received mixed reviews, the biggest complaints being the camera angles and the somewhat repetitive game play. On the flipside the game was praised for both its graphics and especially its music, which is indeed very good. Also noted was the game’s somewhat understated and gentle humor, which was mainly seen in the manual and cutscenes. The story in the manual was allegedly written by one of the writers from The Simpsons, and apparently the lead designer of Croc was never that happy about the Gobbos being portrayed as lovable simpletons. In the second game, however, the Gobbos are portrayed like that, so evidently it stuck.

Croc was obviously meant to be “Super Mario 64 for gamers who didn’t own a Nintendo system”, and it was available for the PlayStation, Sega Saturn and Windows. The PlayStation version looks and runs a little better, plus the Saturn version’s camera is a positioned a little too close to Croc. The Windows version benefits from running at a higher resolution. Currently, the Saturn version cannot be properly emulated. The PAL version of the Saturn game has a glitch that makes untextured objects not show up (which unfortunately included Croc’s head and most enemies). However, it was quite easy to fix. Simply start up the console and then insert the disc instead of starting up with the disc already inside. The whole issue was fixed in later versions of the disc. 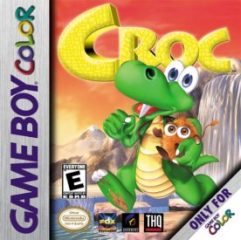 There are also two games for the Game Boy Color. The first one is made by Fox Interactive. The game is nothing really special apart from the usual jumping and collecting stuff with no real gimmicks to its name. Croc has all the skills from both games, most of them useless in a simple jump-a-thon like this. The music is quite good, actually managing to somewhat recreate the nice sounds of the PlayStation game on the much more low tech Game Boy. The game does have a map but just like the first game it is simply used to choose the level as the game is wholly linear. There is however a neat idea (stolen from Super Mario Bros. as it may be) where Croc can find balloons that bring him forward to future levels, even areas of those levels normally inaccessible.