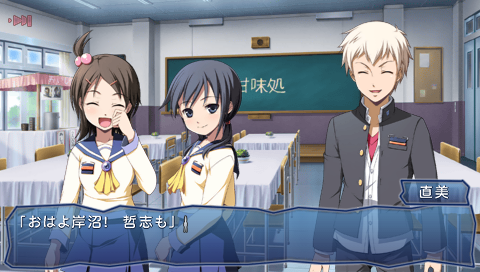 Corpse Party: Book of Shadows makes for a curious sequel, and it helps to return to the PC-98 version to understand it. As previously discussed, the original CORPSE-PARTY on the PC-98 saw numerous fan-sequels. Several of those sequels chose to continue after the game’s Wrong Endings instead of the True Ending.  Book of Shadows follows this fan tradition, as it also picks up after one of Blood Covered‘s Wrong Ends: This particular ending presented the player with an ugly Groundhog’s Day scenario, forcing the characters to revisit Heavenly Host all over again! Book of Shadows (and later, the sequels) goes so far as to imply that the characters have lived through dozens of murderous time-loops before finally reaching the True End of Blood Covered!  Book of Shadows uses this premise to tell a number of independent short stories set at the same time as the previous game. Some of these chapters do not rely on the “time loop” premise, and serve as prologues or side-stories instead, expanding on underdeveloped characters.

While most of the chapters focus on established characters, there’s one “new” character who’s given a chapter of her own, and goes on to larger roles. 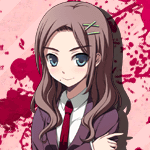 A teen radio DJ and best friends with Naho, who is somehow oblivious to Sayaka’s open and boisterous crush on her. Sayaka doesn’t seem like a major character at first: she debuted as a corpse in Blood Covered, and doesn’t last long in this game either. Lucky for her, she became more prominent in the spinoffs, where she and Naho frequently appear as lead characters, and she has a fair-sized role in Hysteric Birthday.

Unlike the previous two games in the series, Book of Shadows ditches the RPG interface to becomes a Visual Novel with only sparse gameplay.  As a proper Visual Novel, Book of Shadows contains all the features missing from Blood Covered: backlog, auto, text skip, hiding the text box, the works. The game also supports the standard VN feature to save anywhere.

Book of Shadow‘s gameplay is minimal.  After the talking is done, the player can explore the current room by moving a cursor around the CG background, ala Ace Attorney. The player still collects and uses items in the semi-automatic Corpse Party fashion. The game has no way to represent characters in the environment, so if you have to interact with someone, it will assuredly happen during a heavily automated VN sequence. This makes the environment feel empty, but Book of Shadows lucks out, because loneliness fits the mood.

Once the player is done in a room, they can press a button to bring up the map of the school, which is represented by an Infocom-styled node map.  The player can select any destination they want. Naturally, you’ll want to go room-by-room to find clues, but the game can also pathfind your character to far-off destinations. Should the auto-movement try to move past an obstacle or event, the character will stop and announce their discovery, and the map will be adjusted.

This node-based system doesn’t come without a few minor consequences. There are no hidden rooms, even when the time loop brings the player back to when certain rooms were hidden at that point in Blood Covered. The game has also changed the layout of Heavenly Host in a few instances, lopping off small parts of the original map.  For whatever reason, the game also prevents you from moving manually between certain maps: it’s easy to climb stairs between floors, but you can’t move between the main building and the annex unless the game teleports you there as part of the plot, and so on. This at least keeps the gameplay tidy and organized, but damages immersion.

While the player can explore mostly at their leisure, there is a threat in the form of the Darkening meter, which represents the current character’s mental state and increases every time they see something frightening.  This may cause a first-time player to be especially cautious, but it won’t last long, because the meter is harmless.  Except in Chapter 6 (which plays by different rules), the odds of hitting 100% darkening are outright zero. You will never hit 100% darkening without foolishly repeating events, and in some chapters you would have to outright grind the darkening meter if you wanted to lose to get a Wrong End or other unlockables.

While exploring, the player can find victim’s nametags yet again. For some reason, your collection is tucked away in the Options menu of all places, where it would remain in all further 5pb. games, even though Book of Shadows and all later games have a dedicated prize gallery!  Notably, corpses that hold nametags are one of the primary means of increasing the darkening meter. This means that anyone who chooses to ignore nametags has even less to fear from the blunted darkening mechanic!

One major improvement used in the development of Book of Shadows is the use of 3D sound, recorded via a “dummy-head microphone“. The developers really wanted fans to appreciate the effort, and they included an unlockable feature called “the EVP machine”, which allows you to play with most of the game’s voice clips in a customizable playlist.  Also unlockable are a series of voice actor interviews (which also can’t stop lauding praise on the dummy-head mic), a traditional music sound test, and at last a CG gallery.  All these prizes would return in the 5pb. Games entries in the series.

As a visual novel, Book of Shadows rises and falls on its narrative.  Unfortunately, while its individual stories have their merits, Book of Shadows just isn’t a unified experience. There is no overall narrative to Book of Shadows, not even a frame story or hub.  Fans have compared the product to an anthology of short stories, but it’s an anthology that’s been assembled with no curation or theme.  Even the “time loop” premise proves to be little more than a thin excuse to tell more stories in the original setting, as the game seems to outright forget time travel after a chapter and a half of (admittedly clever) experimentation. While the time loop would be brought back to allow the comedic Hysteric Birthday to kill and revive characters with cartoonish impunity, it would prove all but irrelevant to Blood Drive.  At least Book of Shadows manages to capture a similar sense of horror and tone to the original, which is impressive given the total switch in gameplay style.

About the only part of Book of Shadows that progresses the overarching narrative is the hidden final chapter, which actually continues the story from the “True End” of Blood Covered, and introduces the titular Book of Shadows.  The hidden ending leaves off on an infamously abrupt cliff-hanger. It would be a whole three years before Corpse Party fans got a follow-up to Book of Shadows‘ surreal finale, and there would be a whole extra game – two, in a manner of speaking! – to plug the gap.

Starting with Book of Shadows, the series’ release history becomes much simpler. The games have fewer alternate versions, and the versions in question are more or less identical. Book of Shadows was originally released for PSP in Japan in 2011, and was the first Corpse Party game to be released after 5pb. Games’ parent company changed their name to MAGES, although their games division remained “5pb. Games.” The game was released internationally in 2013, once again only via the PSN.  This time, the game only saw iOS release in Japan, also in 2013.