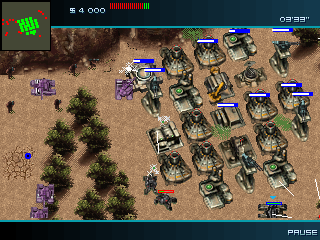 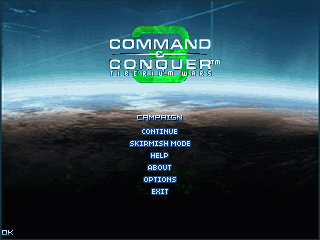 Command & Conquer 3: Tiberium Wars was developed for Java-based mobile platforms. Due to the limitations of mobile phones at the time, porting the Windows version of Tiberium Wars was out of the question. Instead, EA decided to turn the game into a mix of building sim and tactical defense game. Tiberium Wars is apparently set shortly before or during the events of its Windows sibling and once more tells the story of a global struggle between GDI, the UN-sanctioned Global Defense Initiative and the Brotherhood of Nod, a mix between terrorist organization, church, and megacorporation. The game itself offers three campaigns – all of them told from the perspective of GDI – as well as a skirmish mode.

The first tutorial campaign, simply named “Tutorial”, takes place in the Iron Desert, a location neither located in the real world nor mentioned in any other Command & Conquer games. It introduces the player to Tiberium Wars ‘s basic mechanics. Gameplay is divided into two phases. During the build

phase, structures are placed and units are purchased. The heart of the player base is the construction yard. Power plants provide energy and allow other buildings to function. Facilities such as the barracks and the war factory produce units. The technology center unlocks high-end units.

Once all structures have been placed, the combat phase begins. During this phase, enemy units approach from all sides and try to destroy the player base. Once the base (or a mission-critical building) is gone, the player loses; once all enemy waves have been neutralized, the player wins. The base can be reinforced with defense towers, but these are immobile and not very cost-effective. Instead, the defense of the base has to be shouldered by two player squads led by officers Glint and Vent. Up to five units can be assigned to each squads. Squads attack any enemy unit within range automatically, leaving maneuvering as the only action the player has to take. Having two squads limits tactics somewhat, but also makes unit control manageable with a mobile interface. 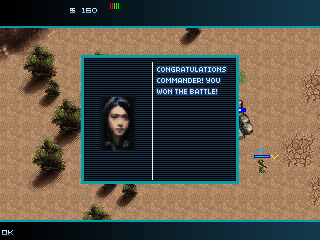 Once all enemy forces have been turned into blobs of red, the mission ends. The player is presented with a breakdown of the battle, including detailed information on how many poor souls died in the sand. Afterwards, the next mission starts. This is where Tiberium Wars shows its core design flaw. A wise player will have constructed refineries and harvesters, both of which generate income after every mission. The issue with these economic structures is that they require a comparably high initial investment.

The best strategy is to repel the first couple of waves with the minimum amount of units necessary and invest the rest of money, which in turn leads to a nice flow of cash to be used for the later, more difficult missions. To make matters worse, post-mission income is a not a fixed amount based on refineries and harvesters, but is generated as long as the battle last. This gives the player an incentive to drag the battle out as long as possible – which is as effective as it is dull.

Without extra cash, structures cannot be repaired and units will not be replaced. It is very easy to slide into a downward spiral of performing poorly during one mission, which then leads an even worse performance during the next mission. Missions can be restarted, but ultimately, Tiberium Wars can only be beaten by planning out the entire campaign ahead of time – even with only four missions per campaign.

This becomes even more evident during the second campaign, “Under the Burning Sun”. Set in the mysterious Plateau of Fang (which may or may not be related to H.P. Lovecraft’s Plateau of Leng), the second campaign drops all the handholding. Going into this campaign more or less blind is partially mitigated by the radar station. The radar station gives precise information on the amount and type of troops in the next wave of attacks.

As useful as this it is, the radar costs additional space, money, and power, once more giving those the advantage who already know what lies ahead. Also introduced are support powers. The first one is the Orcs airstrike, accessed via the airport and executed by GDI’s Orca VTOL aircraft. The Orca strike is powerful enough to obliterate all Nod units but their heaviest tanks. It is also rather pricey and provides less value for money than ground units.

In the unit department, Tiberium Wars falls not into one but two common real-time strategy game traps. The first is a rather common one: stronger, more expensive units completely replace weaker, cheaper units. Basic infantry is worthless cannon fodder. Bulldog buggies are slightly better, but are outclassed by Predator medium tanks. Zone troopers, excellent anti-armor units in the Windows main game, are completely useless. They fall almost as quickly as basic riflemen but come at a higher price point. The only unit worth buying is the Mammoth, GDI’s heavy tank. Certain units perform better against others, but the Mammoth compensates for all of that by having the highest damage output and defense. 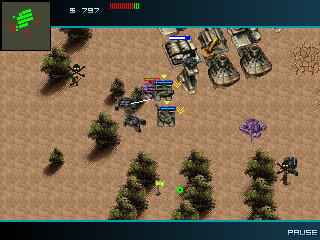 The spded, rate of fire, and range of all units is almost the same and barely figures into any tactical decisions on what units to buy. On top of that, the two squads with five units each limit the player to a total of ten units. Enemy waves consist of fifty or more units. With opposition like that, concentrating as much firepower as possible within the limits of this unit cap is the only viable option. Tiberium Wars does not give differentiate between units; the brittle rifleman costs one spot, as does the mighty Mammoth.

The Nod units that attack the player base in suicidal waves are largely identical to the GDI units the player is provided with. Both sides have basic infantry. Nod buggies and Scorpion tanks barely differ from Bulldogs and Predators. The only distinct Nod unit is the fanatic. Identifiable by a huge skull with crossbones, fanatics run up to structures and blow themselves up. They come in large numbers and deal a high amount of damage, but also have incredibly weak defense. Fanatics never go after enemy units, and can often be disposed of without scratching a single building.

The final campaign, “The Nod of Disapproval”, is surprisingly easy compared to the previous one. Having learnt their lesson on the Plateau of Fang, veteran players will do the sensible thing and pump out as many Mammoths as they can. For the most part, those are not even needed because another support is introduced: The Ion Cannon, GDI’s orbital space laser. The Ion Cannon requires a lot of energy, but obliterates all units within its target radius. Said radius is equal to a quarter of the size of the battlefield, which allows the player to exterminate entire waves of Nod units with one click.

On top of that, the Ion Cannon cost no additional money to use (unlike the Orca strike) and recharges faster if provided with additional power. Fully powered up, the death laser requires no charge-up at all and can be reused immediately after the animated of the previous strike has ended. Even better, it selectively cuts through enemy units as if they were made of cardboard, but does not harm player units or buildings. While illogical even by the standards of video games, this makes the Ion Cannon hands down the best weapon in the game.

Once all three campaigns have been completed, all one is rewarded with is a basic “thank you” message. There is a skirmish mode, but it is essentially identical to the campaign, with the exception of the player being able to build freely while not being interrupted by messages every couple of minutes. Tiberium Wars barely has a story to speak of. General Granger, Lieutenant James, and Lieutenant Telfair, GDI characters from the main game, all appear to brief the player, but the briefings boil down to almost nothing. Nod attacks, they have to be repelled, some new technology is introduced

The aforementioned locations have no relation to anything in the franchise, and it remains a mystery while the game is not set in real-world locations like the Windows games or even the mobile version of the next game, Command & Conquer 4: Tiberian Twilight. The script is passable, but contains a couple of odd quirks, giving the impression that it was not written by someone whose first language is English. Other versions, such as a Czech version, do in fact seem to have a better translation.

Graphically, Command & Conquer 3: Tiberium Wars does not impress. The graphics are adequate for the platform it was made for, but use very few colors. The entire game is mostly blue and brown. Nevertheless, all buildings and units look close enough to their Windows Tiberium Wars counterparts and are easily identifiable. The game was published on a variety of phones and scales with the resolution its device offers. On some phones, it is quite comfortable to play, but on others, the portrait displays very little of the battlefield. 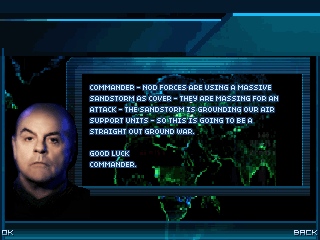 The controls feel a bit cumbersome, but are probably as good as they can get for a J2ME game and are explained well-enough during the tutorial. While not exactly a masterpiece, a fair amount of thought went into this translation of Tiberium Wars. The execution is lackluster, though, with an unbalanced campaign that can be finished in less than two hours, and little beyond that. Command & Conquer 3: Tiberium Wars was an obscure little companion to its big Windows brother even at the time of its release, and only slid further into obscurity since. 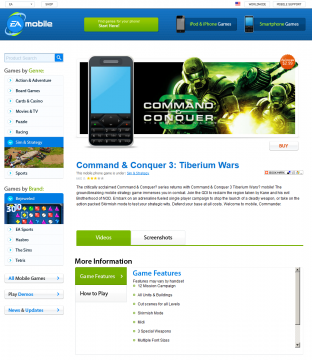