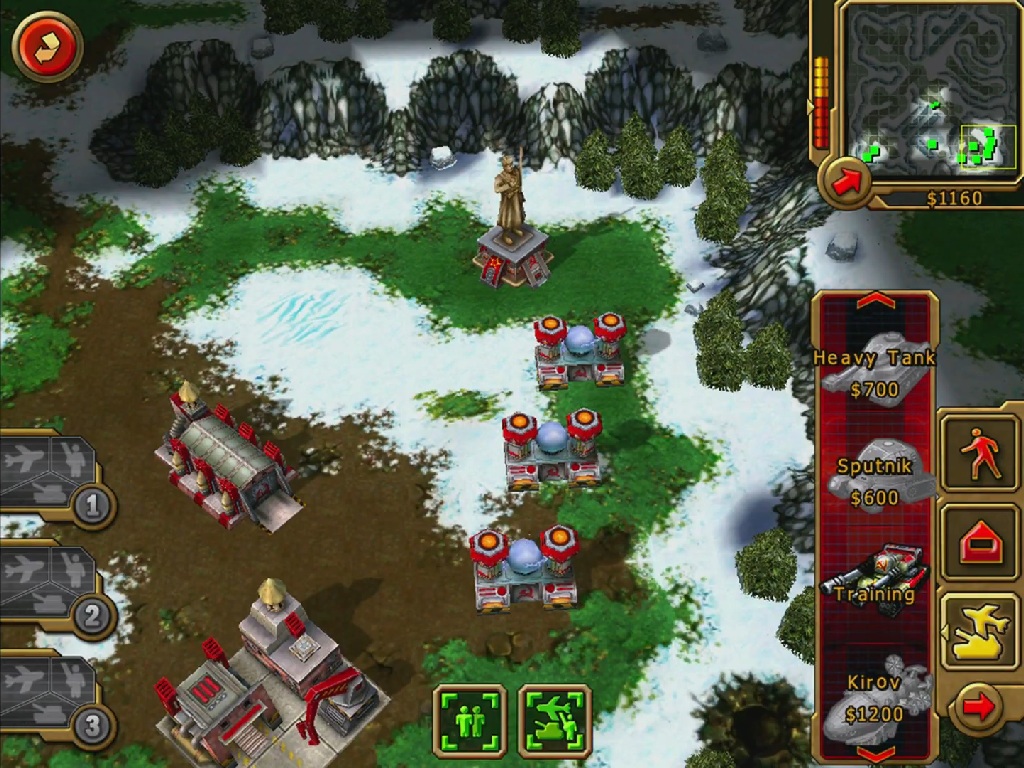 Red Alert lifts its gameplay largely from Command & Conquer: Red Alert 3, just as Red Alert Mobile does. The real-time strategy trinity of base building, resource collection, and army management has been left intact. The player’s base centers on its construction yard, which provides them with additional buildings. These will either be refineries to ear income, power plants to, well, power everything, tech structures, or production facilities. The latter produce units, which then rain death and destruction on the opposition. 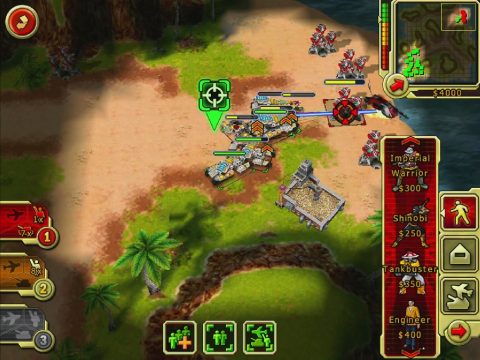 This sounds exactly like the formula that the Windows Command & Conquer games use, and for the most part, it is. Simplifications include the absence of ore miners to carry ore from the mine to the refinery, and a shallower tech tree. Furthermore, the entire game works via touch controls. These are fairly intuitive, using pitching to zoom or simply copying mouse controls. Helpfully, the developers included button to select all units and group them, eliminating fiddly screen tapping.

Like Red Alert Mobile, Red Alert bridges the narrative gap between Red Alert 2 and Red Alert 3. After a global war between the Soviet Union and its allies on one side and the rest of the world on the other, Moscow is about to fall. The Soviets decide that it is time to cheat fate and develop a time machine with appropriated Allied technology. The plot is overall serviceable, but does not hold any exciting twists or turns. Allied communications officer Eva McKenna returns from Red Alert 3, as does Soviet sniper Natasha Volkova, using the likeness of their respective actresses.

More interesting is the Allies and Soviets arsenal, which contains a mix of units from Red Alert 2 and Red Alert 3 as well as some unique ones. That said, most of the units fall into basic categories and have direct counterparts in the opposite faction. Both Allies and Soviets field basic and anti-tank infantry, a light and heavy tank as well as light, heavy, and interceptor aircraft. There are some differences between these units, but for the most part, a Legionnaire is equal to a Tesla trooper, a Paladin tank to a heavy tank (which does not even get a fancy name), and a Kirov airship to a Century. It is just called the Century here; maybe “Century Bomber” was too long for the unit description text box. On the plus side, it is pretty obvious what every unit does, and the similarities between the two sides ensure that they are fairly well-balanced. 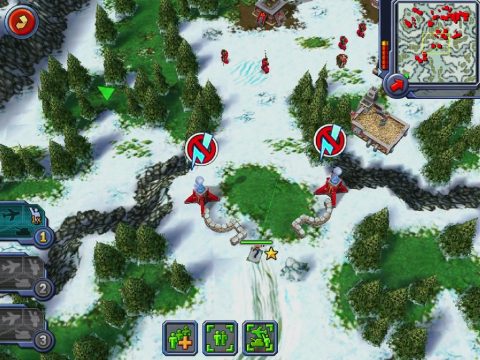 Unique to the campaign are Red Alert’s two hero units: Tanya Adams and Natasha Volkova. Tanya dual-wields pistols and can blow up structures with C4 charges, whereas Natasha distributes headshots from a distance and can call in air strikes. The two heroines are features heavily in both of the game’s campaigns, each of which has five missions – despite EA Mobile’s website advertising the game having a total of twelve.

Some of the missions are identical to their counterparts from Red Alert Mobile in regard to plot and objective, but use completely different maps. Both games have unique maps as well, and while Red Alert Mobile has overall more missions, they are also shorter. The mission variety is overall decent. The difficulty, on the other hand, is a little bit of rollercoaster. Some missions are trivial and merely require the player to follow instructions, whereas others demand swift expansion and seizure of strategic positions on the map. No saving is permitted during a mission, but the game automatically saves after every completed map.

If the campaigns are not enough, Red Alert has both skirmish and multiplayer modes. The multiplayer maps are all symmetrical and offer a decent challenge if played against the AI, which is more aggressive than its J2ME counterpart. Matches against other humans are supported as well, either via WiFi or Bluetooth. Neither EA nor Apple ever commented on the commercial performance of Red Alert in detail, but it went from its launch price of $.6.99 to $.099 in a couple of months.

Overall, EA Romania probably did they best they could do giving the platform they were working on and the directives from EA’s management. Command & Conquer: Red Alert is a true real-time strategy title, not a tower defense game or time-wasting city builder. That by itself is already a rarity for a mobile game, and even if looked at just by itself, Red Alert is a decent game that knows the limitations of its environment. Today, playing it is almost impossible. Red Alert was not updated to run under later iOS versions, and left the iTunes Store in 2014. It is still possible to play it on old devices, but for the most part, Command & Conquer: Red Alert remains a game that as curious as it is lost.

However Command & Conquer: Red Alert performed commercially, it apparently did well enough to warrant an expansion pack introducing the Empire of the Rising Sun, the new third faction in Command & Conquer: Red Alert 3. Until then, conflicts in Command & Conquer had largely been confined to Europe, Africa, and the Americas, even though East Asia is represented by the Republic of Korea in Red Alert 2. This changed with Red Alert 3. Japan, known was the Empire of the Rising Sun, had secretly build up military strength while the capitalists and communists were busy fighting over Europe. Once both of them were at their weakest, the Japanese joined the struggle for world dominance.

Red Alert’s expansion – which has no equivalent for Red Alert Mobile – focuses on the Empire’s rise to power and adds another five missions to the Allied and Soviet campaigns. This time, the player is briefed by no one other than the Emperor himself, using the likeness of George Takei, who portrait him in Red Alert 3. Initially, that is. At one point after the game’s release, EA apparently lost the rights to use Takei’s likeness, and his portrait was replaced by a less famous moustache-wearing person.

Also present is Izumi, a Japanese schoolgirl who also happens to be a psychic commando with terrifying powers. Izumi is the sister of Yuriko Omega, the Empire’s commando unit in Red Alert 3 and likewise a psychic. Izumi plays a prominent role during Japan’s preparations for world conquest, and differs a bit from Tanya and Natasha in regards to gameplay. Like Yuriko, Izumi can emit a psychic scream that destroys all infantry units around her. Additionally, she can destroy all enemy units and structures with three psychic blasts – exactly three, whether she is attacking a lowly conscript or the mighty Soviet Apocalypse tank.

Psychic schoolgirls aside, the Empire’s arsenal is quite similar to that of the Soviets and Allies. Attack dogs are replaced by shinobi, and heavy tanks make place for Tsunami tanks, but all and by large, every unit and structure has an Allied or Soviet counterpart that does more or less the same. On the one hand, players will have no trouble getting used to the new factions, on other hand, this leaves Red Alert with three largely identical factions, which is a bit disappointing.

This is partially buffered by the campaign, which spikes the difficulty quite a bit. Whereas the base game allowed the player to hoard tanks and simply drown the AI in units most of the time, the expansion puts a lot more pressure on the player. Especially vicious is the second mission, which leaves the Imperials outnumbered, outgunned, and with a strict time limit.

Overall, this expansion gives players more of the same. Those interested in the Empire’s backstory get a little bit of information, and everyone not convinced by the main game will not be convinced by the expansion either. Years after Command & Conquer: Red Alert was released, little of this matters anyway, as the expansion disappeared from digital shelfs together with its parent game, likely never to return.