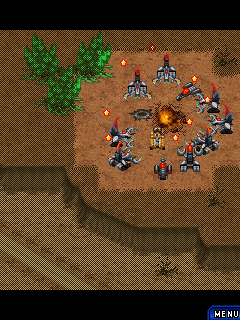 Command & Conquer 4: Tiberian Twilight offers two campaigns with a total of twelve missions. The plot covers the Incursion War between GDI and Nod separatists hostile to both GDI and Kane, the mysterious leader of the Brotherhood of Nod. GDI wants to establish the so-called Tiberium Control Network, a global net of nodes designed to contain Tiberium. The separatists, to whom Tiberium is sacred, seek to destroy it. The player does not, however, work for the separatists. Instead, they receive their orders from Kane and Brother Marcus, a high-ranking Nod commander. On the GDI side of things, orders are issued by Colonel Louise James, a main character in the Windows version of Command & Conquer 4: Tiberian Twilight, and General Raven.

There are a twist or two, but for the most part, the story is pretty basic. In the majority of missions, the player is asked to assist a secret agent, establish a base here, destroy an enemy base there, and do other tasks that are more or less standard practice for a strategy game. While a nice little addition, the events of Command & Conquer 4: Tiberian Twilight, barely add to the series’ overarching storyline. Those who skip this game here – which will the vast majority – will have no trouble following the plot of the core games of the series. However, the game does introduce the concept of the Crawler, both in-universe and with regards to gameplay. The Crawlers received a mixed reception, as their introduction meant the end of traditional base building in the Command & Conquer series.

The Crawler is a bulky and heavily armored vehicle that, once deployed, can in turn deploy other units to the battlefield. Two types of Crawlers exist. The Offensive Crawler has the more powerful units, whereas the Defensive Crawler can set up defense structures around itself. That is all the base building one gets in Tiberian Twilight. The third Support Crawler, heavy on air support, did not make the jump from the Windows version. After their introduction in the first two tutorial-like missions, the player can pick whatever Crawler they want for the next mission, and also chose whether they want to side with GDI or Nod.

The Crawler itself has a gun, but the majority of the fighting will be done by the units it produces. Every Crawler has access to six different units that will be unlocked over the course of the campaign. Tiberian Twilight uses a rock-paper-scissors system, with every GDI unit being efficient against a specific Nod unit and vice versa. While it looks good on paper and works fine for other real-time strategy games, this system is undermined a number of factors. The power level between the different units still varies a lot.

The strongest units in the GDI and Nod arsenals are the Mastodon and the Widow, both of which are so powerful that once they are accessible, there is little reason to build anything else. Thanks to heavy armor and a long health bar, both the Mastodon and the Widow will last longer than most other units and gain promotions that last. Tiberian Twilight has a small unit cap, incentivizing the player to accumulate as much firepower as they can within their strike force. 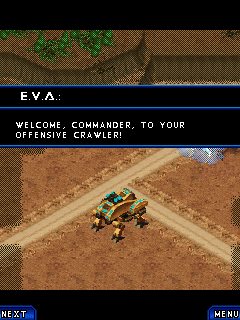 The rock-paper-scissors system is even flat-out broken in some regards. Due to what has to be an oversight in design, one of the Nod units is weak against two GDI units, whereas another one has no weakness at all. Even player who try to utilize he system may find it hard to do so. Maps are littered with pre-placed enemy units whose weaknesses are impossible to predict without having played the respective mission before. Sometimes the game kindly calls in reinforcements, eliminating the need to worry about what to build anyway.

Lastly, all units come with a secondary power. Some have a powerful attack with a cooldown, others protective powers or a speed boost. The most useful of these is the repair ability of the GDI Hunter. Not only does this power heal a decent chunk of hit points, it heals a decent chunk of hit points for both the Hunter and all units around it. The cooldown period for the repair ability is not particularly long, turning fights against groups of Hunters into a desperate struggle to destroy them faster than they can heal one another.

For the player, this is annoying but not overly problematic, as the AI does not exploit Hunters very well. For the AI, it is difficult to deal with a player abusing Hunters. Thankfully – or most likely coincidentally – the Hunter is a low-tier unit and can be overwhelmed by high-tier units. With slightly better statistics, the Hunter would break the game all by itself.

Despite its somewhat broken mechanics, Tiberian Twilight still has a lot more to offer than one might expect from a mobile spin-off. Most missions have secondary objectives, feature dialogue by the player’s units, and have unique tech structures. Between missions, players can pick various support powers to unlock. None of this is exactly groundbreaking, but shows that a fair amount of effort was put into Tiberian Twilight, and since it is a mobile spin-off instead of a core game, it is easier to forgive that the game tosses away the established real-time strategy formula that popularized Command & Conquer in the first place. 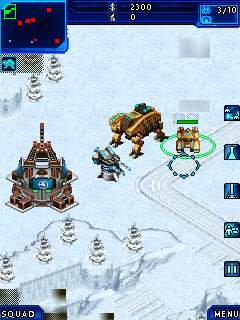 Tiberian Twilight was released for a variety of Java-based phones. The only real differences between the versions are the screen size they support as well as the controls. With touch controls, Tiberian Twilight is fairly manageable. More often than not, a player will find themselves selecting their entire army instead of managing individual units, but as concentrating firepower like this is the best strategy anyway, that is not much of a flaw. Those whose flip phone lacks a touch screen will have a harder time and find themselves constantly cycling through units and menus, hoping to stop at the right moment next time.