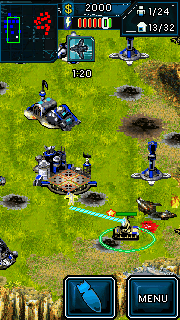 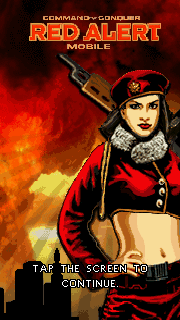 Unlike the J2ME version of Command & Conquer 3: Tiberium Wars, which was turned into a mix between tactical builder and tower defense game, Command & Conquer: Red Alert Mobile is a traditional real-time strategy game for the most part. It is based on Command & Conquer: Red Alert 2 both with regards to story and style. Red Alert Mobile takes place at the (canonical) end of the second war between the Allies and the Soviet Union. The Soviet Union and its allies failed to take over the world and Allied tanks are knocking at the doors of the Kremlin. A Soviet general named Bronislav decides to take matters into his own hands and travel back in time to prevent the tide of the war from turning against the Soviets. 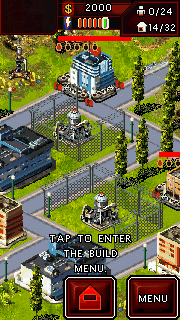 If this sounds familiar, it is probably because this is the plot of Command & Conquer: Red Alert 3. However, that game never explained where exactly the Soviets got their time machine from. It was apparently build by Soviet scientist Gregor Zelinsky, even though time travel was previously the domain of the Allies and their Chronosphere. It turns out that the Soviets nicked the technology from the Allies – just as they did in Command & Conquer: Yuri’s Revenge, the expansion pack for Red Alert 2. Red Alert Mobile tells us of these events, and thus bridges Red Alert 2 and its sequel.

The story is told in fifteen missions – seven for the Allies, eight for the Soviets – divided into two campaigns. Before each missions, the player is briefed by Bronislav, Soviet elite sniper Natasha, Allied intelligence officer Eva, or Allied commando Tanya. The plot is overall serviceable and above-average for a mobile game, but not exactly groundbreaking. There are even in-mission cutscenes, something that not even the earliest Command & Conquer main entries had. The setup and idea to bridge the two Red Alert games is something nobody was asking for, but is interesting nevertheless.

Equally interesting is the arsenal this leads to. Command & Conquer: Red Alert Mobile brings in units from both its predecessor and its quasi-sequel. The structures are mostly lifted from Red Alert 2, but some of them, such as the Allied Tech Lab, come from Red Alert 3 instead. Equally lifted from its big siblings is the gameplay. The real-time strategy triumvirate of base building, resource gathering, and army management is present, albeit in a simplified form. 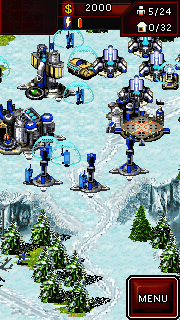 Ore Refineries simply extract gold from the ground once place on an ore node, and no longer send out an Ore Miner to harvest it on the map. This presumably allows for the map space to be used more efficiently, and puts less pressure on the poor phone that has to handle all of this. It also makes the game marginally more realistic, as none of the previous Red Alert entries could explain why there is gold just laying around everywhere.

Building construction and unit production has been left intact. The heart of every base, the construction yard, builds other structures, which are then places in the vicinity of previous built ones. The barracks and the war factory spit out one soldier or vehicle at a time. Technology buildings unlock high-end units, power plants keep everything running smoothly, and base defenses, well, defend the base. Both signature superweapons, the Chronosphere and the Iron Curtain, made it into the game. The former teleports a group of units to any spot on the battlefield, and the latter renders them temporarily invincible. While a bit fiddly to use, it is nice to see that these icon weapons made it into the game.

Other elements that unexpectedly made the jump to J2ME are tech structures and garrisonable buildings. The former provide the player with a boon such as automatic promotions for all units, whereas the latter grant a high defense bonus to infantry. This makes the otherwise fragile infantry units a more viable choice. The famous shark-faced Kirvo airship, the bane of many a player in Red Alert 2 multiplayer matches, is not available as a separate unit, but can be called in as a support power.

In addition to units lifted from the main Red Alert games, Red Alert Mobile fields some new units of its own, especially for the Allies.  Among them are the Paladin tank, equipped with an extra shield, and the chrono buggy, which slows time for nearby enemy units. Peacekeeper infantry is present as well, but unlike Red Alert 3, where Peacekeepers are cannon fodder, the Red Alert Mobile Peacekeeper requires nothing less than the Allied research lab, the prerequisite for the highest-tier units. And it is still mostly cannon fodder.

Due to the limitations of its platform, the missions are kept short and the maps small. Most missions can be completed in five to ten minutes, which is probably for the better considering the platform Red Alert Mobile is on as well as the lack of in-mission saves. Other quality of life features include the group system from Tiberium Wars: when a unit is recruited, it is assigned to one of two teams for easy army management. Overall, Red Alert Mobile works surprisingly well for a mobile strategy game – provided it is not played on a phone without touch controls, or with a very low resolutions.

The developers put a fair amount of effort into the design of the missions. Almost all units and buildings receive and introduction and can be utilized right after that, making Red Alert Mobile accessible for newcomers to the series. The mission objectives vary quite a bit and range from tactical infiltration to the cleansing the entire map of hostile units. The appearance of units and buildings is distinct enough to tell all of them apart with ease, even if infantry units are little more than blobs of pixels.

Other good design choices include some of the tech structures like the hospital, which grants all infantry units regeneration, the academy, which gives all new units a promotion, or the oil derrick, which provides the player with extra income. These structures work just like this in Red Alert 3, but their passive bonuses are even more important in Red Alert Mobile, as they allow the player to gain a benefit without adding any more layers of complexity. Another sensible choice is the omission of air units as independent units. Instead, they are now easy-to-use support powers. Other nice additions include a little encyclopedia about the game as well as achievements – on a 2009 mobile game!

Despite the fact that Red Alert Mobile is an overall good translation considering the limitations of the platform, it is not without flaws. The most glaring one is a classic in the real-time strategy genre: stronger units replace less powerful ones. The Soviets really only ever need the biggest tank available, and the Allies can stick with their one long-range tank, which outranges everything else comfortably. That said, since micromanagement is more or less impossible on a small phone screen anyway, this may be for the better. 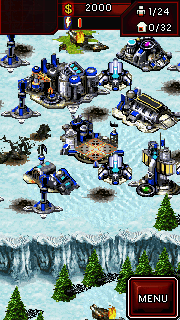 The second major weakness of Red Alert Mobile is the artificial intelligence. In the campaign, the lackluster AI is too much of a problem because all missions are asymmetrical challenges anyway. In skirmish mode, however, the AI simply does not stand a chance. All the player needs to do is grab two gold mines right at the start of the map and then outproduce the computer. This simple formula works every time; the AI never expands fast enough to anyone but the slowest of players.