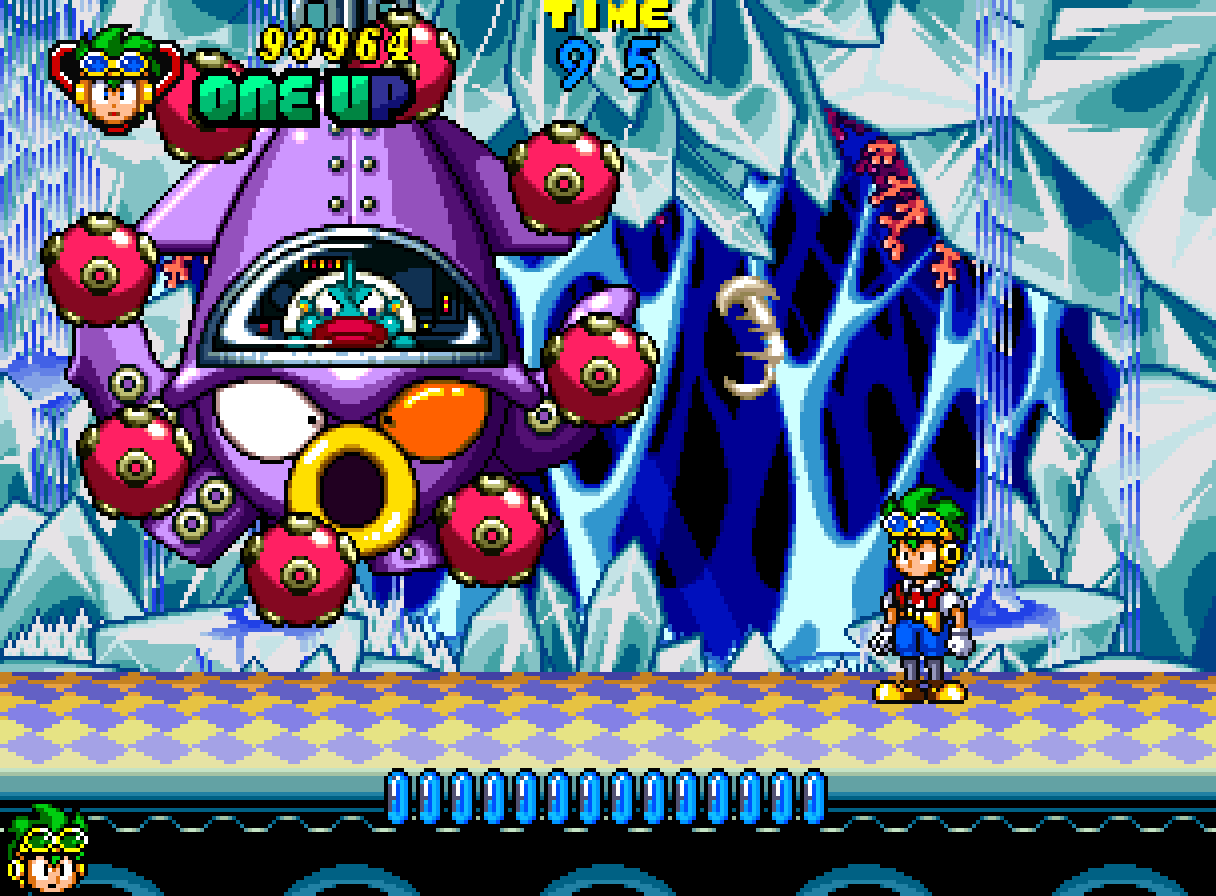 Clockwork Aquario was the final arcade game developed by Westone, the folks behind the Wonder Boy / Monster World games. Originally developed in 1992 and 1993 for the Sega System 18 arcade board, the game failed location tests and was canceled before release, resulting in the game lying in the company’s archives for a few decades. Thankfully, publisher ININ Games stepped in to fund a restoration project, allowing for the world of Aquario to shin after a long slumber.

The evil Dr. Hangyo (half-fish) has ambitions to take over the world, and only a brave trio – steampunk gunslinger Huck Londo, magical girl Elle Moon, and lumbering robot Gush – can stop him. Taking place over five levels, it’s a run-and-jump platformer with two-player co-op play. Enemies are stunned by jumping on their heads, hitting them from below, or simply by slapping them with a melee attack. A second hit will kill them, but they can also be picked up and lobbed at other enemies. Stages are also filled with balloons, which are harmless but are a joy to bounce around on, and also grant scoring combos bonuses if you pop them in a row. The heroes can take two hits worth of damage – a single hit will tatter their clothes (or in Gush’s case, cause his head to comically pop off), while a second one will cause them to lose a life, but there are also regular health potions that restore characters to their regular state. Other power-ups include colored jewels, which slowly fill up the “ONE UP” bar at the top of the screen and grants an extra life when filled, and stars, which will grant temporary invincibility and allow the heroes to shoot three way star attacks. 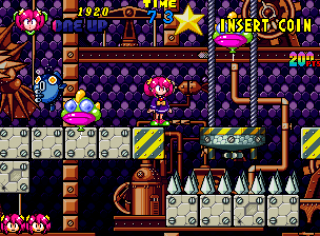 Co-op play adds in some additional mechanics too, as players can jump on each other’s heads for extra boosts, or grab their partner and toss them across the screen. Colored jewels are attuned to specific characters – Huck can only grab green, Elle’s are punk, and Gush’s are yellow. You can jump on your partner’s head repeatedly to cause them to drop your jewels, giving you an extra helping hand; alternatively, you can be a jerk, pick up their jewels, and throw them off the screen where they can’t get them. There’s also a bonus stage exclusive to two-player mode, where you try to pop your opponent’s balloons by tossing sports balls across the field, while simultaneously defending your own.

The action is full of energy, but it’s really the visuals where Clockwork Aquario impresses the most. Westone games were typically known for their wide-eyed, brightly colored characters as well as their comical enemies, and this one might be one of the best they ever produced. The protagonists are full of personality with details like their facial portraits changing when attacking or getting hit. On the character select screen, you see them posing unaware, with Huck examining his gun, Elle posing in her camisole, and Gush tuning himself up with a wrench; when you select Elle, she acts surprised, then politely asks that you hold on for a second as she hurriedly puts on her dress. Their running animation cycle is hilariously fast, making it look like they’re chugging through the stages, and look even sillier when they’re stumbling around in their damaged state. The action is accompanied by an upbeat, danceable soundtrack from Westone regular Shinichi Sakamoto. 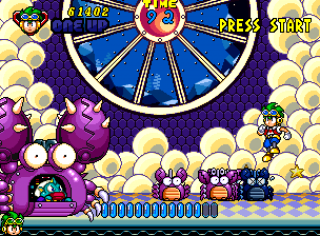 True to the title’s name, all of the enemies are mechanical clockwork robots, most based off of fish or other aquatic animals. Dr. Hangyo can be seen piloting the bosses, and is unceremoniously tossed out of its cockpit when they’re defeated, leaving him dazed for a moment before he scampers off the screen. Like the Wonder Boy games, when a character runs out of health, they fly up onto the screen dressed as an angel, allowing you to reposition them, and then tossing off their robe as they re-enter the fray. Except the robe is too small for Gush, who instead wears it as a long skirt. The game is filled with little touches like these, along with lively, animated, brightly colored backdrops. Every frame of this game is a joy to look at.

It is, however, an arcade game from 1993, and that means that it’s pretty short. There are only five stages, including a brief autoscrolling one where you ride a boat through a storm, and the game can be beaten in less than twenty minutes. The Easy mode limits you to nine credits, which is enough to get to the end without too much of a problem, with other difficulties just limiting you further; beating the game will unlock an Arcade mode which lets you tinker with the board settings and also insert credits as you please. The game really isn’t a quarter muncher, though it may require a bit of practice to get used to enemy placement and boss patterns. Health restoratives are regular and there are plenty of opportunities to gain extra lives, so even beating it on Hard mode is reasonable. The hit detection can feel a little off, though, plus it’s initially unclear how to beat the final boss, which is the only part of the game that feels a little unfair. 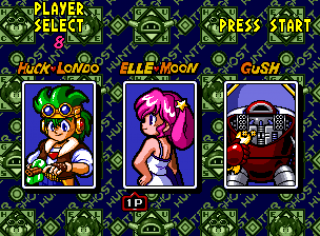 Outside of this, the only real criticism that can be leveled against Clockwork Aquario is that its mechanics are enjoyable, but it never really finds anything to do with them. It’s a lot of fun to bounce along the balloons, and there’s always a torrent of them that appears before the boss room, but these are optional and don’t really grant much other than minor score bonuses for successfully completing. Even though there are scoring mechanics, they’re not particularly complex, and the score differences are minute anyway. This broader issue manifests itself in the boss fights – it might seem like you should use the secondary enemies to toss them back at the main boss, but it’s usually easier just to wait for a pattern where they’re vulnerable and then slap them to death.

Beyond the main game modes, there are the usual assortment of screen and display filters, though save state and rewind functionalities are missing. There is a concept artwork gallery, which also includes some visuals regarding its restoration; this includes a note from programmer Steve Snake, the creator of the KEGA emulator, noting how some graphics were corrupted, which were redrawn by the original graphics team after nearly thirty years. You can also listen to the original and a newly arranged soundtrack, though the remixed music is only in the sound test and can’t be enabled in the game for some reason. 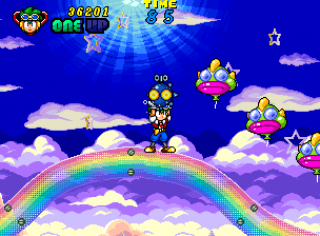 Owing to the iterations that came from location test feedback, it seems like there were some cool elements that just were never used. Huck looks like a steampunk gunslinger, but he never actually uses his weapon; similarly, concept artwork shows Elle using magic, and Gush having extendable limbs, which don’t really show up in the game either. One of the original design iterations (not included here) included an “invincibility” button that allowed the characters to power themselves up after gaining enough power-ups, presumably the same as the star power still in the final game; this is even shown in one of the instruction mock-ups. The original title of the game was “Ghost Hunter”, which still shows up in the background tiles on the character select screen, though considering there aren’t any ghosts, it’s understandable why this was changed. The game was initially planned for three players, but was apparently scaled back to two due to the lack of suitable arcade cabinets. (Alien Storm was another three-player Sega System 18 game.)

There might be some trepidation being that this game was initially unreleased – after all, canceled projects are typically canceled for a reason, especially if they’re basically completed. But that’s not really the issue with Clockwork Aquario – it’s a highly amusing, absolutely gorgeous game whose only failure was that it was planned for the wrong platform. Given the arcade game landscape in 1993, it simply came out at a time when the type of gamer it was aiming for was no longer visiting arcades, and probably would’ve been better being expanded and released as a console game. Huck, Elle, and Gush and their clockwork aquatic world are too charming to be confined to a single, brief arcade game, so let’s hope that their long awaited arrival ushers in a world of new adventures.