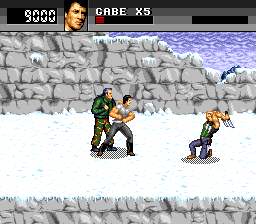 If one person was chosen to symbolize everything a country stands for, who would be chosen? The Right Honourable Clement Attlee would be a prime candidate for England thanks to the creation of the NHS, Mahatma Gandhi would likely represent India, and you’d have a hard time finding someone more suited to iconify Germany than Karl Marx. But what about America? It’s a strange society. Younger than nearly all others, and as a mishmash of immigrants from other countries, we have very little in the way of a shared cultural identity. Almost everything we cling to as Americans is borrowed from someone else. Baseball and football are bastardizations of cricket and rugby. Rock ‘n’ Roll’s continued iconoclasm in America is just as much the work of the Brits as it is its American pioneers. Even hotdogs and hamburgers can have their roots traced back to Frankfurt and Hamburg, Germany. The only thing that truly defines Americans is their ability to consume all of these things. We are symbolized by our own excess. And that is why, with his horrible movies that have unending streams of sequels, habitual steroid abuse, charmingly bad overacting, and a nearly endless list of merchandising campaigns spackled with his image, few people define America better than Sylvester Stallone.

His mother was a fortuneteller and pro-wrestling promoter and his father a barber, thus he can’t identify with any family profession. And the arching careers of he and his brother Frank represent the constant flux of great success and utter, utter failure that is America. In essence, Sylvester Stallone is America, personified in flesh and bone. He beats up evil Russians, blows up evil Asians, and gains the love of his son by winning an arm wrestling tournament with a bunch of truck drivers, all while wearing red, white and blue undies. He even spawned American badassery around him, putting Mr. T on the map and inspiring Hulk Hogan to make a dramatic heel/face turn that changed his career and the face of pro-wrestling forever. He was everything a child aspired to be in the 80s and early 90s, and I was one of many of those children who bought into Sly’s ultra-manly, ass-kicking brand of America. Rocky, Cobra, Tango and Cash.

And that brings us to the mid-90s. In 1993, Stallone starred in Cliffhanger, where he must fight a group of thugs amongst snowy mountains, all while coming to grips with the accidental death of his friend’s girlfriend. Then, little more than a year apart, Stallone releases two very similar movies: Demolition Man in late 1993, and Judge Dredd in mid 1995. Both of these feature Sly as a cop wrongly accused of murder in the future. One future is a gritty, corrupt dystopia where violence has become so prevalent that a new order of soldiers are dispatched to dish out law and sentencing on site, and the other future is so perfect and Utopian that no one has any idea what to do when a criminal from the past shows up, leaving them with no choice but to thaw out a legendary cop from the same era. Both movies were terrible in their own ways and both featured Rob Schneider in a supporting role. All three had a slew of video game tie-ins on virtually every platform available at the time – some good, some fantastic, and some absolutely abysmal.

The 16-bit versions of Cliffhanger take the form of a rather subpar beat-em-up. Stallone plays the role of Gabe Walker, who must stop a group of thieves, led by Qualan (John Lithgow, pre-3rd Rock from the Sun) from stealing some cash that was lost amidst a snowy mountain range. Gabe’s moves are staggeringly limited – a punch, a kick, and a jump kick – with a few weapons like knives and guns to fend off foes. The action is stiff, slow, and irritatingly difficult. Thankfully, every few screens you’ll run into a campfire, which acts as both a checkpoint and a place to refill your life bar. There are a few ill-conceived platforming sections, which may bring back terrible memories of the cave from the NES version of Double Dragon, and even worse sections where you need to scale up mountain walls by avoiding enemy fire. Since the entire game takes place on the mountains, there’s not much in the way of scenery or enemy variation, so everything looks pretty boring. There’s very little to recommend about Cliffhanger – even the most average of beat-em-ups are usually saved by two player co-op, which this doesn’t even have, making the game nigh worthless. 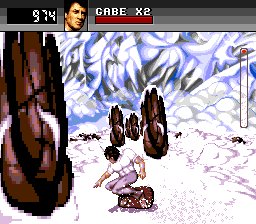 While Cliffhanger was released on both the Genesis and the SNES, it seems like the Genesis was the lead development platform, because the SNES version looks almost exactly the same, except for the slightly darker color palette. The Sega CD version is basically the Genesis version with a number of enhancements. For starters, there are a whole ton of clips from the movie, played in the intro and in between levels. The video looks pretty bad, per usual Sega CD standards, but they’re better implemented than, say, the Sega CD version of The Terminator, which didn’t even have any voices. The soundtrack consists of redbook audio straight from the movie soundtrack. It’s pretty damn good and makes the banal action seem far more dramatic than it actually is. Finally, there are a couple of 3D scenes where Gabe snowboards down the mountain while outrunning an avalanche. Much like the Sega CD version of Batman Returns, these were probably implemented to show off the system’s fancy scaling effects, which actually looked a bit better than the standard SNES Mode 7. They don’t add much, but they were definitely impressive at the time.

The 16-bit versions of Cliffhanger were bad, but not THIS terrible. The 8-bit versions, for the NES, Game Gear and Game Boy, are the worst kind of sidescrolling platformers, with awful graphics, choppy controlling, and sluggish controls. There are tons of running jumps you need to make – you need to hold up and walk for a few seconds – which leads to all kinds of disasters, when you overshoot or skid straight into spiked pits. Although you can occasionally find throw knives and other limited weapons, most of the time you just resort to punching enemies, which usually consist of wolves and bats. Like the 16-bit games, you can heal yourself at campfires, but it drains your money, presumably using as kindle The game seems to have been developed for the portable platforms in mind, then later ported to the NES. It would account for the tiny sprites and terrible coloring in the NES version, anyway. This version was also used for the basis of the Amiga version, which looks the best of them, but still plays terribly. All four are completely reprehensible, and should be avoided. 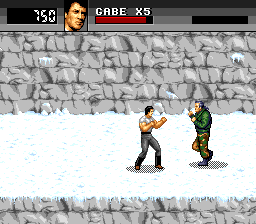 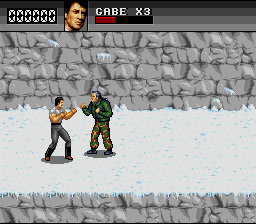 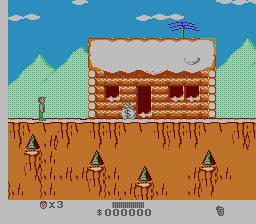