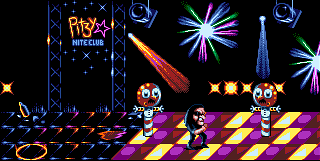 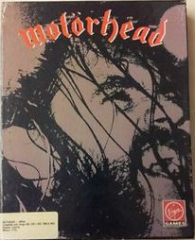 Did you think that Brütal Legend was one of the first games to star some of heavy metal’s most popular performers? Well think again, because Motörhead from 1992 was here first. Developed by Kaitsu Software (apparently their only release), this game puts you in the mutton chops of the gravel-voiced Lemmy Kilmister, out to beat the hell out of everyone standing between him and the rest of his band. As detailed in the manual, Motörhead have rode into town to play a gig, only to get set upon by “a local guerilla army of unknown quantity”. Our hero Lemmy discovers that the rest of his bandmates and crew have been kidnapped and now it’s up to him to single-handedly bring them back. Unfortunately he’s going to have to travel through 6 music-themed levels and beat a lot of people senseless if he wants to succeed.

Motörhead is a scrolling beat ’em up, and a very simple one at that. Every level is more or less a straight line from start to finish with very few stage hazards in between, except for a couple of pits and beds of spikes that you’ll need to hop over in certain levels. Sometimes there are parts of the scenery that you can walk up or jump onto, but this provides no tactical advantage whatsoever. You’ll only face two different enemy types throughout the entire game: the smaller basic enemies and the larger ones, the only difference between them being that the larger enemies take more punishment and don’t suffer any knockback. Despite some of them having different types of attacks, the basic enemies are more than happy simply walking right up to you while some of the more ingenious ones might try to get you from behind. All other differences between enemies are purely cosmetic. Dull level design and lack of enemy diversity is a killer when it comes to beat ’em ups, and we have that in full force here.

Due to having only a single fire button, the controls are setup the same as a lot of Amiga and Atari ST games of this type: the fire button alone does nothing, and must be used in conjunction with a direction on the joystick to perform the various actions. Attacking is done by holding the fire button and moving the joystick in the direction Lemmy is facing, while jumping is done by holding fire and pressing up. Even though you do eventually get used to it, initially this control scheme feels awfully counter-intuitive compared to games on systems with more than one button. You can also break into a run by double-tapping left or right. Pressing fire while running puts you into a skid and releasing it makes Lemmy deliver a headbutt. This is a useful tactic since enemies seem to have a much harder time attacking you in the middle of a sprint, but actually getting the headbutt to connect is a tad imprecise. “Imprecise” is a good word to describe how the game plays in general, especially since enemies have a bad habit of randomly slapping you down even if you manage to hit them first.

There are no weapons or health restoratives hidden in destructible garbage cans here. Instead your enemies drop various items on death such as cans of beer and jars of pickled cockles. They provide you with points, health or projectile attacks that can be fired by pressing fire and down. Then there are the golden Motörheads which fill up your magic meter, allowing you to launch screenwide special attacks with the space bar. The first level of magic summons a groupie who leaves your enemies stunned; the second summons a giant Motörhead who damages all enemies on-screen; and the third wipes them out completely. You can also press fire and back to make Lemmy shred out a “Power Chord”, a projectile that kills most basic enemies in one shot. All these attacks drain your magic meter pretty heavily so you don’t want to rely on them too often. Trying to grab items can be costly since Lemmy goes into a little animation whenever he picks up anything, leaving you open to attack. Combined with the fact that enemies will naturally swarm around you and that items only stay on the ground for a very short interval, frustration is guaranteed.

Once he’s rescued one of his bandmates, Lemmy partakes in a quick minigame where he drives down the road whilst trying to grab power-ups to bolster his health and magic meter. After that you’re rewarded with a bonus round that differs for each level, almost as if they’re trying to make up for the lack of variety in the rest of the game. Most of them are based around typical heavy metal pastimes such as smashing up hotel rooms, picking up groupies outside clubs and grabbing drinks at the bar (four bars, actually; you’ve got to cycle between them to catch beer mugs sliding down the counters). The worst of them is the one set in a sushi restaurant as the controls are not what you would expect and it’s very difficult to move between the tables quick enough to grab the fish before it vanishes. Still, they make nice little diversions for the most part. The image of a tiny, goggle-eyed Lemmy scurrying around with his tongue hanging out is certainly an amusing sight.

Perhaps it’s not very fair to be so harsh about Motörhead for its repetitiveness. It’s doubtful that the developers were angling to create something that would compete with the likes of Double Dragon; they surely wouldn’t have bothered picking up such an off-the-wall license if they were. Instead it looks as if they were having as much fun with the wacky premise as they could and this silliness becomes the game’s main draw. Each level is based on a particular type of music and, like Brütal Legend, they don’t treat other genres or sub-genres kindly. Whether it’s the baseball cap-wearing thugs in the alleys of “Rapcity” to the trenchcoated punks in the “Scrapyard”, none of them are safe from getting a good kicking from our man Lemmy. In the streets of “Karaokeville” you’ll have to deal with sumo wrestlers and a slew of drunk Japanese businessmen (one of which is awkwardly named “Tojo”; it may be an actual Japanese name but most people know it as an archaic racial slur). A couple of enemies appear to be based directly on actual musicians, including the buxom Dolli in “Nashville” clearly being modelled after Dolly Parton and Blaki in the goth-themed “Cathedral” level being a dead ringer for The Cure frontman Robert Smith. Most of the crueller jibes are relegated to the manual, containing such passages as, “Who else would you find wandering through slums with nothing else to do but rap fans,” and (speaking of one of the goth enemies), “Scum like that deserve to die regardless of whether they have kidnapped you or not.” Things go completely off the wall in the final level where you’re beating up giant versions of Zebedee from the children’s TV show The Magic Roundabout in the middle of a rave. It’s hard to hate a game that has the audacity to create such a visual in the first place.

As uninteresting as the levels are to play, they at least look pretty. The highlight is probably the Cathedral level, a rather surreal environment with crystals growing from the ground, skeletons perched on top of pillars and tarot cards lining the floor. The character art is nicely done as well with at least three enemies per stage having their own unique look and animations. Even the the vehicles Lemmy drives are tailored to each level, ranging from a tractor to an Akira-inspired motorcycle. Sadly the developers were not able to license any actual Motörhead tunes so they had to make their own original compositions. The themes for the intro and bonus stages sounds suitably heavy metal while all the other tracks are tailored to fit each level’s musical genre. The Cathedral does indeed have a very gothic sound and Nashville has a suitably country-style twang. On the other hand the Scrapyard’s theme doesn’t sound much like punk rock at all and it becomes one of the more grating tunes in the entire game.

All said and done, Motörhead is a difficult game to recommend in this day and age. In terms of beat ’em ups for the Amiga and Atari ST you could do a lot worse, but with so many better alternatives available on home consoles it’s not really worth going back to. However what those games don’t have is the same tongue-in-cheek attitude and the sheer novelty of playing as one of metal’s biggest stars. The closest comparison would be to Michael Jackson’s Moonwalker, another game remembered mostly for its celebrity protagonist and bizarre premise, although Moonwalker is certainly the better game of the two. 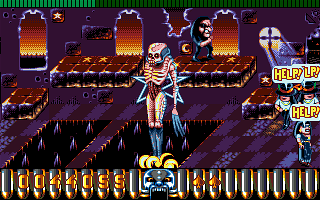 In comparing the two Motörhead releases, the Commodore Amiga version doubtlessly comes out on top next to the Atari ST’s. The heavy metal guitars come through very well on the Amiga sound chip and every track has its own sound to it. The graphics do look a bit more muddy and subdued on the Amiga, but the ST loses any points it may have gotten in the visual department due to its awful slowdown. Any more than three moving objects on the screen at once slashes the framerate and the jerky scrolling is off-putting to say the least. Even though it has some slowdown issues of its own at times, the Amiga is the way to go for your optimal Motörhead experience.