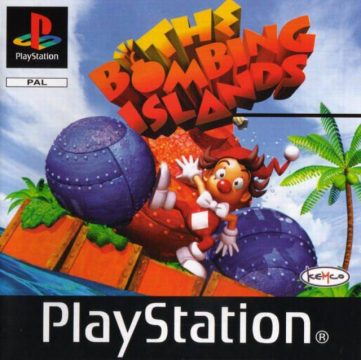 Originally conceived as a stand-in character for the US release of Mickey Mouse III: Dream Balloon, Kid Klown gained a life of his own when his second game, Kid Klown in Crazy Chase for the SNES, the first game in the series to be released in Japan, as well as the first to feature character designs from illustrator TONG KING SHOW (responsible for the art in several Taito games, such as Sonic Blast Man and DonDokoDon, as well as the covers for ASCII’s Dengeki PC Engine and early Dengeki G’s magazine). Sometime after the game received a sequel on the PlayStation in 1996, it was decided that the character was popular enough to have a puzzle-themed spinoff. This spinoff, The Bombing Islands, is often compared to Bombuzal and is considered by many to be a spiritual successor, but the game itself feels more like an explosive Sokoban. 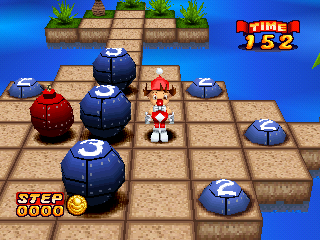 The game starts off with a simple CG cutscene showing that the King of Clowns has given the order to Kid Klown to dispose of the bombs that have suddenly appeared across “Clown Planet.” Why the bombs are there, or why the King is giving a child a seemingly suicidal task are questions never answered, but it’s still a good 30 seconds more unnecessary backstory than Bombuzal ever had.

The entirety of Clown Planet is represented by 60 levels, divided into 6 worlds, with each level having a set of explosives to blow up and a password to give once the deed has been done. Like Bombuzal, and quite unlike many other PlayStation games around this time, The Bombing Islands does not support the Memory Card. Resuming requires inputting a password made up of four cards from the French 52-card playing deck; you’ll have to keep note of both suite and rank of each card when writing down passwords.

It seems like Kemco put a little more thought and/or money behind the presentation of The Bombing Islands than either they or Image Works did for Bombuzal, and that’s not just due to the improvement in hardware or goofy CGI. Bombuzal, while certainly unique-looking, doesn’t really have a set theme tying together its visual aesthetic. Sure, the main character is a perpetually grinning blue potato, but that entire game seemed to emphasize function over form in terms of look. In The Bombing Islands, the worlds are each visually distinct even though the same obstacles and objects can be found in all of them. 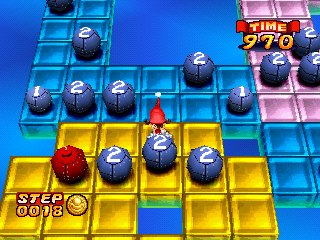 Additionally, the game really plays up the cuteness inherent in having a cartoony clown child handle a bunch of explosives. Kid Klown hops and yips frantically when shoved into a bed of spikes, flattens like a sheet when a bomb rolls over him, does a little dance at the beginning of each level, and shrugs with a confused frown when he fails to clear a level. And there’s just something amusing about watching him become increasingly distraught as the Red Bomb timer ticks down, first tapping his foot in anticipation then eventually curling up and covering his ears for the impending explosion. With this all to the tune of a peppy, redbook soundtrack, The Bombing Islands feels just as whimsical and filled with personality as the previous Kid Klown games.

Mechanically, The Bombing Islands has many of the same elements as Bombuzal, including bombs of three sizes, movement-altering tiles, and the overarching goal of having to detonate all of the explosives on a given level. However, bombs are a little more difficult to get rid of this time around. They’re too large and solid for little Kid Klown to simply walk over, and many of them don’t have have fuses for Kid to ignite. Getting rid of the bombs requires careful placement of the Red Bomb, a medium-sized explosive that has a fuse to light, and that must be used to detonate the other bombs. And, unlike Bombuzal, bombs cannot simply be adjacent to an explosion to be detonated, but must be actually within an explosion. Clearing each level, therefore, becomes a challenge in trying to find effective ways of arranging the bombs to where they’ll all detonate each other, like a bunch of explosive dominoes. 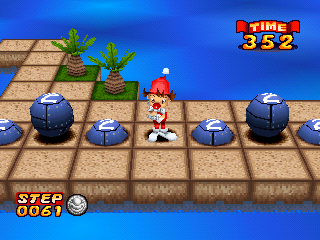 The Bombing Islands requires a fair bit more planning than its predecessor, as one false move can screw up your chances of clearing a stage. Thankfully, the game seems to be built with that in mind. Levels tend to be much smaller than those in Bombuzal, allowing for a better view of the entire stage when going into the overhead view mode, or when adjusting the camera. There is also an “undo” button, where you can go back a step if you suddenly realize you’ve screwed yourself over. If you do screw up beyond the limits of the undo button (which will happen a lot), you can easily restart the stage from the pause menu, and there’s no lives system to penalize you for screwing up.

One new factor players might want to keep an eye on is the step meter, which simply counts how many steps it takes for Kid to clear a level. While this has no effect on Kid’s person or the player’s ability to finish a stage, it does serve as a sort of grade by which the game judges the player’s performance. As the step counter goes up, the medal beside it will go from gold, to silver, to bronze. While this might seem like the game’s stand-in for an actual point system, being able to clear all 60 levels in the main game within the unstated gold medal limit will unlock an extra 60 levels after the game’s (somewhat humorous) ending.

Kid’s fool errand isn’t as fraught with hazards and obstacles as what was present in Bombuzal, though there are a few new ones this time around. Slippery tiles and Dissolving tiles make a return appearance, as do the occasional immobile bomb. Mines are absent, though there are spiked beds that Kid Klown can walk into. These won’t kill him, but will instead make him jump up and forward, allowing him to hop over bombs and other obstacles taller than him. Spikes can also cause him to leap off of the stage, but this will only cause him to jump in the opposite direction, towards the stage. Trampolines replace the teleporter titles, and they now move Kid to another trampoline instead of an unmarked tile somewhere else in the stage. There are also bouncy tiles, like wobbly barrel cacti in the Desert stages or pinball bumpers in the Ruins stages (for some reason), that Kid can push bombs against, which will cause the bombs to rebound to the square behind Kid, squishing him in the process. This isn’t lethal either, and is often required to solve some of the puzzles. 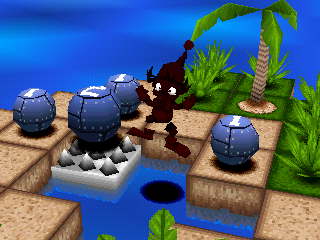 As a matter of fact, other than the timer running down or getting caught in a bomb blast, there isn’t a way for Kid to “die.” He can fail a level by not catching all of the bombs in the Red Bomb’s explosion, but as there’s no lives system, anyone can try as many times as they want on a level. And, perhaps to keep players from getting too frustrated from repeated failures, one can always have the computer show how to clear the level from the pause screen. This isn’t exactly an instant-win button, since the player is still expected to beat the level by themselves after the demonstration, and the way offered by the computer sometimes goes over the gold medal step par, but it’s pretty close.

The end result is a game that has a more leisurely, less unfair feel than its predecessor, but one that also feels a little more repetitive. In Bombuzal, you’d discover how to solve each puzzle through different means, tinkering and experimenting, since each level had a different combination of factors to work around. In The Bombing Islands, the goal is pretty cut-and-dry. And, while each new world brings with it an increasing amount of stage gimmicks, the need to slowly push around bombs remains constant. Even during the first two worlds, where the levels are at their smallest, playing the game for more than a few stages at a time can get pretty tedious. The last two worlds get pretty ridiculous in how large the stages get to be, with each level requiring five minutes or more to set up, and that’s if you know where to push everything. 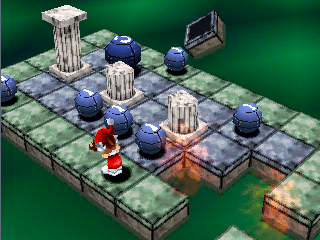 All things considered, it’s really kinda hard to say whether or not The Bombing Islands is a superior game to Bombuzal. The presentation is certainly improved, and the mechanics make for a game that’s far more easy to approach. On the other hand, the puzzles themselves simply aren’t as interesting or engaging as the earlier game’s, and some of the later levels get especially tedious. Still, The Bombing Islands is at least a decent puzzle game with a charming aesthetic, one that’s well worth a look for anyone into block-pushing puzzles.

The game was initially released in 1997 in Japan and 1998 in Europe, but the game would take another three years before reaching U.S. shores, where it was mostly ignored and somewhat forgotten.

Almost 6 years after the release of the PlayStation version, Kemco developed a port of The Bombing Islands for mobile phones. With a similar title and 40 levels, the game at first glance looks to be a simplified version of an already somewhat simple puzzle game.

However, the screenshots seem to suggest something else: The Bombing Island looks to be a port of Bombuzal, but with Kid Klown as the protagonist. Just from the three screenshots still featured on Kemco’s old website, the levels in The Bombing Island seem to be patterned after those in Bombuzal, and there even seems to be helper drones modeled after Kid Klown’s likeness. All of this is presented from a 2D overhead view, perhaps because Kemco realized a isometric 3D view wouldn’t work well with the low-resolution cell phone screens at the time.

Unfortunately, not much other than speculation can be said about the game, as there doesn’t seem to be any way of downloading and running the game in an emulator at the moment. Still, the game’s existence (or as much of what can be confirmed of it) solidifies the link between Kid Klown’s crazy puzzle spin-off and Image Works’ game. 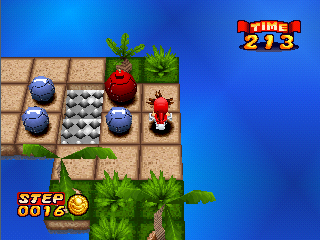