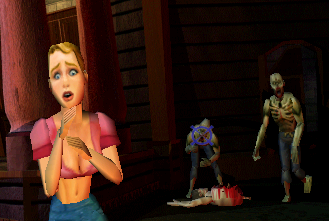 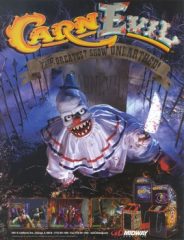 Lightgun shooters are probably one of the most popular genre of arcade game you can find, where the general public is concerned. For proof, you only have to look at how every arcade on the planet seems to have Area 51, or one of the Time Crisis games. There’s one particular game, however, that seems to have been mostly forgotten, for whatever reason. While CarnEvil is far from the best lightgun shooter ever made, it’s definitely worth playing through at least once… at least, before you go back to a better game like House of the Dead. It’s definitely the sort of game that’s great to play at least once for all the weird and goofy stuff that happens, though.

Somewhere in the state of Iowa (not usually a location known for exciting video games), the nameless, faceless protagonist gets bored on a corny ghost tour and wanders off. While the tour guide explains the local legend of the evil Ludwig Von Tokkentaker, the protagonist encounters his gravestone. According to local legend, if you insert a token into Ludwig’s gravestone, his evil carnival, or, cleverly enough, CarnEvil, will rise once more. You might think this would be a terrible idea, but hey, otherwise we wouldn’t have a game. And so, Tokkentaker returns, with CarnEvil springing forth from the ground, a massive fairground of horrors full of mutants and undead to blow to pieces.

Armed only with a shotgun, you have to clear the three attractions of CarnEvil to earn entrance to the Big Top, where Tokkentaker awaits. Upon starting the game, you’re given the choice of three stages, the freak show, the haunted house, and Rickety Town. Upon selecting a stage, you’re then either insulted or vaguely threatened by Umlaut, a giant floating jester skull that basically just shows up to annoy you. 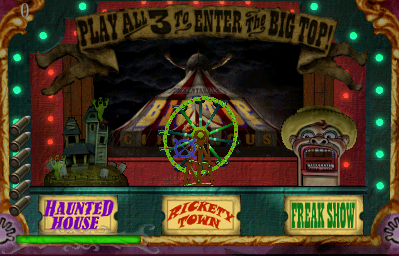 The game itself isn’t that far off from most other lightgun shooters of the time, especially compared to House of the Dead or Area 51. The game pretty much involves continuously moving forward, blasting whatever enemies appear in front of you before they can smack you in the face with something. The only thing really separating it from most lightgun shooters is that the gun you’re wielding is actually a pump-action shotgun. It’s a nice touch that wouldn’t see use again until House of the Dead 3, and if you’re playing on an actual cabinet, you can reload by pumping the stock. It’s definitely a lot more engaging than pointing the gun away from the screen.

Most enemies you encounter will either pop up and try to hit you in the face, move towards you and try to hit you in the face, or throw stuff to hit you in the face. With very rare exceptions, you’ll never fight anybody who just shoots you, which makes it a little easier to react. And in fine lightgun tradition, you’ll have hostages to avoid shooting, although some of them are at least smart enough to crouch down and cover their heads while they’re on screen. Also, oddly enough, every hostage is the same blond-haired, pink-shirted woman, some of which will end up getting killed off by enemies as you enter a scene. Maybe the park has a massive underground cloning facility. 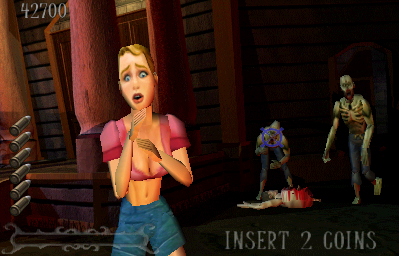 That’s more or less the entire game, sadly. There’s pretty much nothing in the way of secret rooms or alternate pathways. The most you’ll find in the way of secrets are different ammo types, some of which let you melt away enemies with acid or burn them to a crisp with fire. Not that you won’t have to spend plenty of quarters, as there are times when the game feels like it becomes content on nothing but using up the current credit you’re on, no matter what. Some enemies feel like they attack sooner than you can react, while others seem to always get a hit in on you before they die, no matter how many shots you unload into them. Bosses are especially worse for this, since while they can be stunned by shooting them enough, they’re guaranteed to get a hit on you before you can react.

The boss fights are sadly a little too much based on luck to be much fun, and they can all be killed by pointing the gun towards them and jamming on the trigger until they die. None of them are as interesting to fight as a House of the Dead boss, since they don’t have any particular pattern or tactics to them. The highlight of all the bosses would have to be Junior, the boss of the Rickety Town stage. Junior is a giant, undead baby, who you have to kill by shooting him repeatedly in the face, all while he chases you around his massive playpen, occasionally puking on you. But if you’re the sort who takes objections to shooting a baby in the face, undead or otherwise, you can change him to an evil teddy bear in the dip switches. 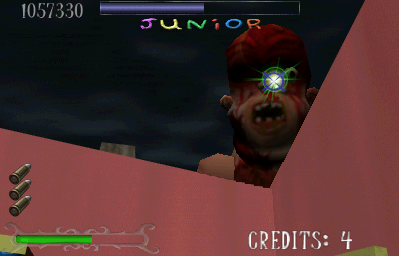 So for a mostly average lightgun shooter, what’s the draw? Well, while the gameplay isn’t anything special, it sure is a lot of fun to watch. Pretty much every single moment of the game has something interesting to look at, whether it’s a new kind of enemy to murder, or some kind of silly background event. What’s nice about the game is that you never stay in one spot for particularly long, and there’s never a point where the game repeats a background. There’s just so many goofy details from just playing the game that they’re almost impossible to count. Take the haunted house, where you enter a kitchen. You find the zombies you fight throughout the game butchering human flesh, but then you notice some of them are wearing chef’s hats. And there’s a child’s drawing on the refrigerator.

And as you’d expect from your average Midway game, there’s plenty of violence and objectionable things you’re going to shoot in the face. Minor enemies get whole chunks blown out of them each time you shoot them, while bosses will end up getting shredded up by your attacks as they continue to come at you. Overall, the game’s just too goofy to really be scary, especially since you go up against foes like surly undead food clerks who throw pizza at you, but it’s so wonderfully campy that it makes the perfect Halloween game. The graphics are pretty decent for the time, with most of the enemies having a surprising number of polygons for the time. The backgrounds themselves are FMV, but the enemies themselves are 3D models. It generally works pretty well, since you don’t have to worry about hitting the exact hitbox on enemies, while there’s enough detail in the levels themselves that things generally stay interesting. 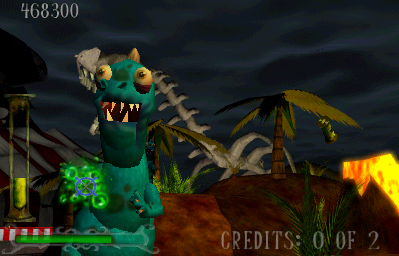 There’s plenty of goofy voice acting, as well, with every type of enemy getting its own unique voice. It’s a nice touch, especially when you deal with flying bad midgets who yell at you in Spanish. The music’s not very memorable, with one exception: The Big Bunyan Ride. At one point during the game, you hop onto a ferris wheel, so named for the giant statue of Paul Bunyan next to it. During this entire sequence, it plays this infectiously catchy theme that simply has to be heard.

For all its kitschy charm, sadly, the game just can’t quite compare to the likes of games like House of the Dead. If you’re willing to forgive its quarter-munching difficulty and short length, however, it makes for a perfect Halloween experience.