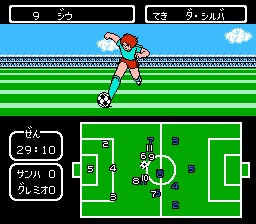 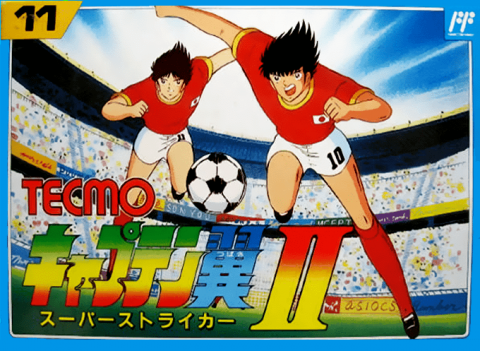 After releasing Captain Tsubasa for the NES in 1988 and inaugurating the “Cinematic Soccer” concept, Tecmo had a busy time with the success of Ninja Gaiden and Tecmo Bowl. They returned to the Tsubasa franchise in 1990, with the release of Captain Tsubasa vol II: Super Striker. This game is a Famicom release exclusive to Japan; it uses the “Cinematic Soccer” engine again, but there are several major enhancements, most importantly in the gameplay, but also the graphics and the soundtrack. This game has seen many fan translations, has been picked apart by ROM hackers, and has the reputation, totally warranted, to be a better game than its predecessor. It is then a shame that it was never released outside of Japan, or that Tecmo Cup Soccer Game was an adaptation of the first one instead of the second one.

The story is set after the events of the first game; while they use the characters from the anime, the two games are in a sort of alternate reality compared to the manga, even though some elements (like Tsubasa playing in Brazil against Carlos Santana) are present both in the video game and the anime (the original one, and World Youth, broadcasted in 1992). The first part of the game follows Tsubasa in Brazil, where he leads his team of Sao Paulo to victory; the game then rather abruptly cuts to Tsubasa’s old team of Nankatsu, now led by Misaki Taro, who has to prove to everyone that Nankatsu can still win (including a final against, you guessed it, arch-rivals Toho and their captain Hyuga) despite Tsubasa’s absence. At the end of this tournament, Tsubasa plays with Sao Paulo in a tournament that culminates in a match against Japan’s national team (and his friends); finally, Tsubasa and his friends are reunited for the World Cup, which culminates in a match against Brazil. The game’s difficulty increases as you progress in a tournament, but the tournaments don’t necessarily get harder and harder: the Asia qualifiers (fourth tournament) are quite easy, while the match against Toho (final of the second tournament) might be the hardest in the game. You will probably need over 20 hours to beat the game. 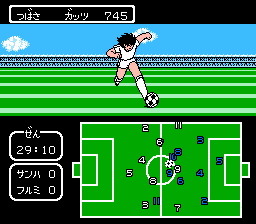 Compared to the first opus, a number of gameplay changes have been made, which all together make the game much more fun and deeper. The main change in the game is the mini-map, which is now dramatically more useful: it now displays the position of each player on the field in real-time, even showing their number (which can help if you want to avoid a particularly strong player). This changes everything for the better strategy-wise: you can now see instantly where your teammates are, which allows you to wait for them, get closer, or attempt a hail mary pass to someone without defensemen around; and you can see where your opponents are, which helps you avoid them, or plan passes to your teammates that have less chances to be cut. The game finally feels like a soccer game, instead of a vaguely-RPG inspired sequence of random encounters, owing to its great improvements in the realm of spatial awareness and strategy, which is crucial in soccer. It does a really good job calculating trajectories and seeing if any player can attempt to steal a pass mid-air; corner kicks now allow you to place your players as you wish to attempt to go through the defense; and you can now direct your passes anywhere in the field, instead of just having 4 random choices, which is a much-needed improvement in playability and allows for some nice strategies and desperate clears.

Other gameplay improvements allow more control and more possibilities, and make the gameplay surprisingly deep. The game increased the number of possible actions, adding for instance the 1-2 combination which, if I’m being honest here, sometimes helps get rid of defensemen a little bit too easily. You also have more possibilities for the goalkeeper, who can now contest the ball on a center kick, or decide to wait. The game now gives you the option of faking a shot in the penalty area: the ball’s trajectory is shown, and if you see a teammate is next in line, you can let the ball through, which will confuse the goalkeeper and increase your chances of scoring. 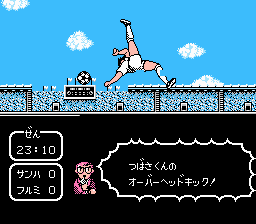 Another gameplay improvement is defense, though it isn’t implemented in a satisfactory manner. The first game didn’t allow you to control your players while defending, and you had to wait until the player controlling the ball stumbled upon your players; you can now control your players, and attempt to get close enough to the ball to trigger a challenge, or get close to other players or on the right trajectory to attempt to block a pass or a shot (which, to be honest, rarely works). However, the issue is that you select which player to control by cycling them in numerical order using the A and B buttons; this doesn’t work very well in some configurations, because your number 10 is usually at the center of the field: if he loses the challenge and lets the other player pass, your next defenseman is number 4, or 2, and you have to cycle through really quick and slow down all your other players. Most soccer games have a system where pressing a button selects a defenseman that’s close to the ball, which is a much better approach; this system is slow and difficult, and doesn’t make defending very easy.

The statistics of the first game are still there, and the system still suffers from the same issues: you still cannot control who levels up and how, you still do not know the opponent’s statistics, or how the encounters’ results are calculated. I would have liked that your opponents have a “guts” system such as yours, but they don’t, which means they can use their special shots as many times as they want to. 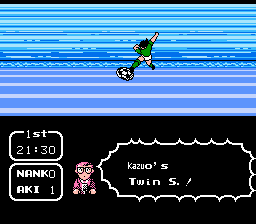 One of my favorite improvements is the implementation of stoppage time: whereas in the first game the matches end when the clock is at 0, here the referee just signals we’re entering stoppage time, meaning the period or match can end any time, but you do not know when. This makes for some nail-biting endings of matches, where you attempt to fend off the opposing team while not sure of when the game will end, and I like this small change very much.

Graphically, the game looks even nicer than the first one, with improved character sprites and animations that are at the same time more varied (since there are more possible actions and shots), more detailed, and more dynamic, with a tight pace. The graphical glitches I had noted in the first game are all but gone, and some extra bells and whistles have been added too. The game also still shines in recreating the style of the anime, with exciting special shot animations, and great camera shots and angles during the matches, and even in the story segments between the matches, giving the game a very cinematic feel. Once again, and even moreso than the first game, fans of the anime will be delighted by the very well-done emulation of its characteristic style.

Finally, the soundtrack for the game is amazing and ranks in my opinion as one of the NES’s best. It was composed once again by Keiji Yamagishi, with Mayuko Okamura  composing the music of the story segments, and Mikio Saito writing the song for the Flamengo team. At around 40 tracks, the soundtrack is rather generous, with once again the important teams getting their own theme, thus reinforcing the tension and importance of that match. Four of the original game’s tracks have been reused and rearranged, with the Toho team’s theme getting a very dynamic and dense arrangement that makes it a stellar track, arguably the game’s best (and you will listen to it quite a lot as you try again and again to beat them). 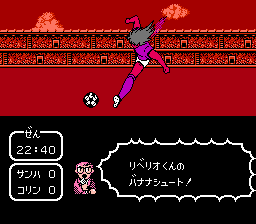 Overall, Captain Tsubasa Vol II: Super Striker is an excellent and overlooked game for the NES; it takes the previous game’s menu-based system much further and adds some much-needed improvements, making it a soccer game that is both fun to play and rather deep. The Tsubasa license is faithfully depicted, too, and its over-the-top style makes it fun even if you don’t know the original material. Highly recommended.

The game was never ported or translated officially, even if it was released before Tecmo Cup Soccer Game. Enterprising ROM hackers have made several translations of the game, in Turkish, Arabic, Farsi, Spanish and English; however, the English translation has to abbreviate text quite heavily, especially in the menus, which makes the game playable but not very polished. A new project was recently started, aiming to disassemble the game to improve the display and make space for more English text, but it hasn’t been completed yet.