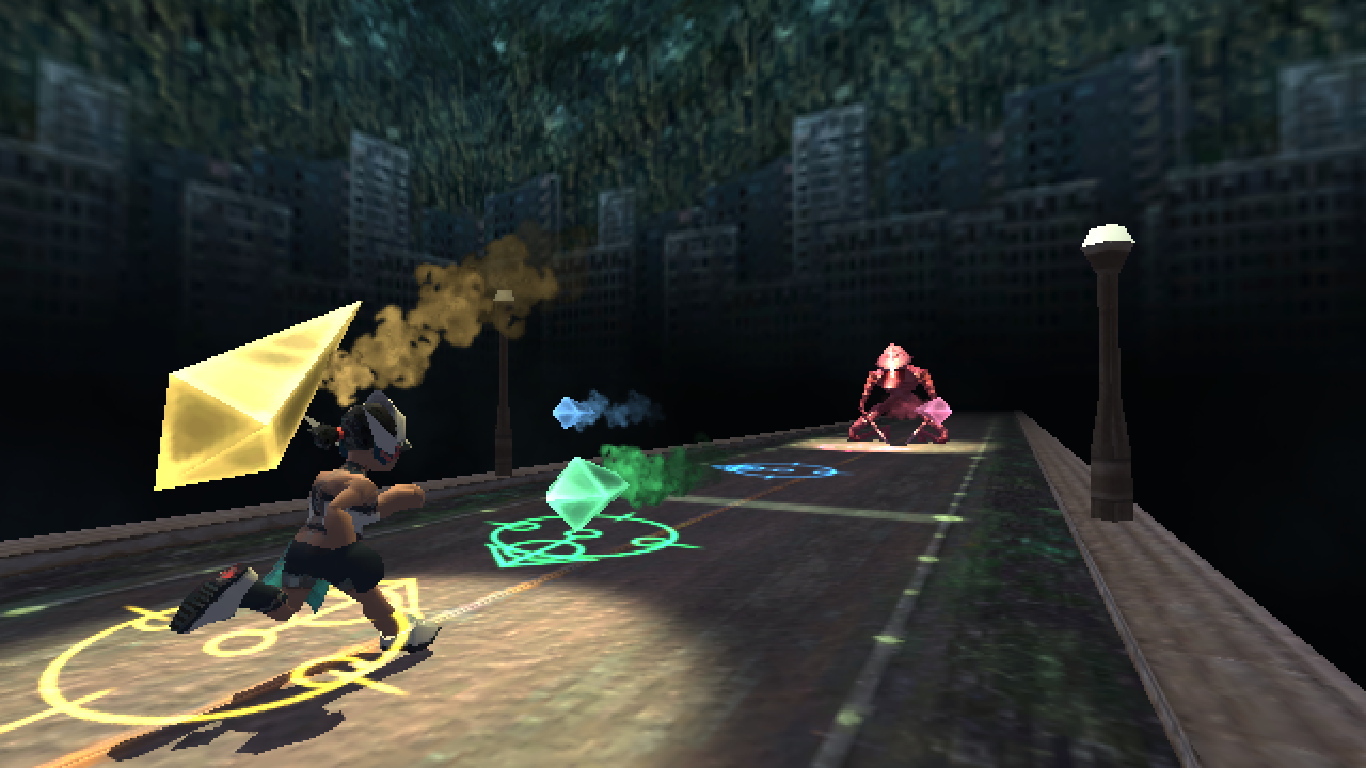 Something worth knowing about Sean Han Tani and Marina Kittaka is that they have been very, very busy since the first Anodyne. They’ve been experimenting with genre and content for a good while now, and Anodyne 2: Return to Dust is meant to be a summation of every game they’ve tried making, ranging from PSX homage to narrative game crammed into the Zelda-like base. The end result is one of the most unique games you’ll ever see, less interesting because of how things come together in design, but how the writing and narrative manages to merge the mess of pieces into a cohesive experience. Oh, and don’t worry Anodyne fans, the nonsense secrets and meta-humor are still here, and arguably even more than ever before. 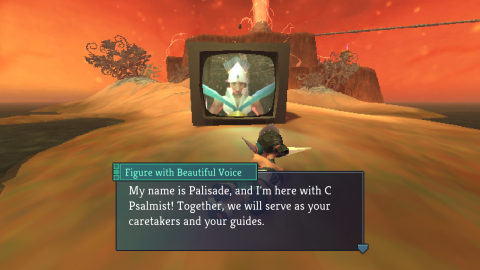 The premise this time around is more concrete, but also more surreal. You control Nova, an actual newborn who gets a seed planted in her head to grow her up enough to become the Nano Cleaner of New Theland (a play on the world of the first Anodyne, simply called The Land).You have to gather dust, a horrible corrupting force threatening all of the world, and help The Center, the creator of all life, to disperse the dust from the world by weaponizing its power. Nova gets a vacuum cleaner for this task, plus the ability to shrink down and enter smaller worlds hidden in dust corrupted individuals, which is how the game divides itself in the PSX style New Theland overworld and the sprite based areas of old Anodyne. You’ll also later gain the ability to explore even smaller worlds within these small worlds, which get an Atari style look.

Anodyne 2 makes some welcome changes in its story, giving a cohesive plot to follow instead of the original game’s vague, dream-like inference. It’s a weird plot, mind you, but you can follow it pretty easily and get a grip on the rules of the world. Nova being a baby basically forced to grow up well before her time is used really well, helping push the existential themes at play exploring just what it actually means to exist and live. The world of order created by The Center gets challenged the longer the game goes on, and Nova’s tale has a really strong ending that builds on her bits of development. 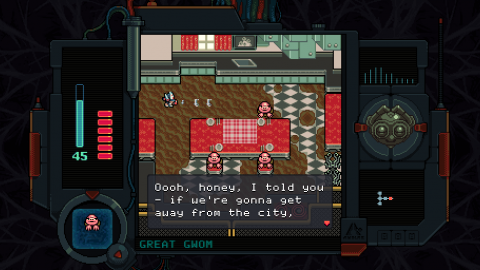 Where Young in the first game never spoke, Nova eventually does get chances to, and it makes the reality of her situation really sink in. It’s how this being with no established context for viewing the world interacts with those in it that gives the story its power, managing some scenes that tug at the heart strings in ways most games aren’t brave enough to go into. Anodyne 2 chooses to let its characters be vulnerable and is all the better for it, showing an emotional honesty in a way that both entertains and endears.

The plot is easier to follow, but there’s still plenty of moments where that good old esoteric style of Anodyne one pops up. The very self-aware script manages to avoid making winking gags and instead chooses to express thoughts the game’s audience may connect with. There are NPCs scattered around who fret over being shoehorned into a a single topic in their video essays, ones who don’t really know how to handle a friend moving away, and even some who’s major identity defaults to “really likes lampshades.” It’s within the scattered secrets of the world does the game’s most brilliant, mind-bending moments come out, especially one revolving around a desert NPC you need to experience first hand. 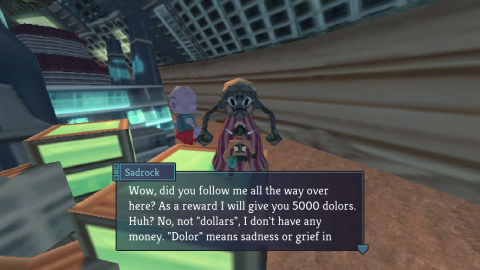 The 3D overworld is a radical change, but not by as much as you’d think. It has stilted camera controls and a few locked-in camera angles, but you get the hang of moving through it quickly, helped by the extremely generous hover you get if you keep the jump button held down. The focus for this part of the game is exploration over complicated platforming, so the enjoyment comes from exploring the map to find goodies (including cards, which are required here as they were in the last game to make story progress) and traverse structures. It does what it needs to do and gives the game a fun style to contrast it with the 2D segments. You can also turn into a car to quickly move around, because why shouldn’t you have the power to turn into a car?

You later get meta-coins scattered around the world after you unlock the desert, which give you something new to do if you want to earn extras. Credit for the team on deciding the extras you get are not art assists, but instead bizarre poetry and prototype levels that were left out of the final game. Worth noting some of these coins also exist outside the area bounds, something the first Anodyne did with its post game, so good luck finding all the weird secrets they hid about this way (including a picture of Youtuber Nitro Rad, who tweeted at them to put him in the game as a joke and then they did it anyways). 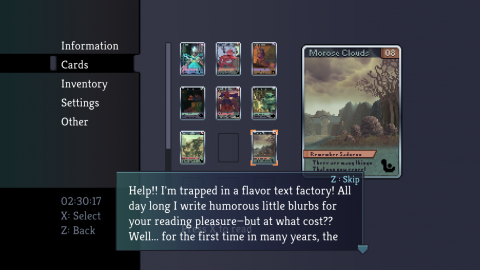 The 2D segments play as they always have, except the broom is traded for a vacuum, changing combat and puzzles significantly. These sub worlds also each have their own gimmick, like a world of a scientist’s robot having you also control a shadow in a parallel room with a different layout. This keeps things fresh and switches up just what each segment will be focused on, ranging from combat, puzzle solving, or simply narrative exploration. You can even find the map of the first Anodyne and discover the sub-sub worlds. On top of all of this, entering sub-worlds triggers a rhythm game, where you have to block bullets by holding down the correct direction. It keeps things fresh and makes these journeys into sub worlds feel more significant and magical.

The impressive part is that the narrative framing makes all these different parts flow together almost seamlessly. What should be a bizarre switch over to a completely different game makes perfect sense in the surrealist logic the game is using. The completely different graphical style also helps briefly separate you from the context of the “real” world, letting the world of the inner mind feel like its own thing. It should be noted that the game doesn’t always adhere to the mind world concept, and sometimes you’re just in another dimension you reach via shrinking, and these worlds feel even stranger than anything else – in a good way. 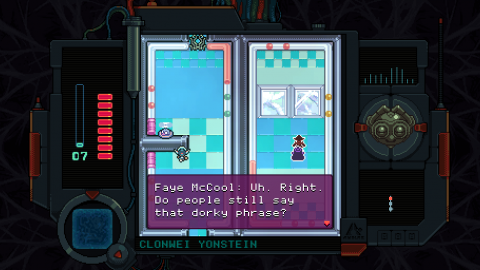 Add in the strong look, understanding of different graphical styles, and varied soundtrack, and Anodyne 2: Return to Dust manages to not just be a great follow up to a bizarre indie game, but a very enjoyable and endlessly fascinating artistic achievement. It mixes together multiple retro styles and creates a proper world from them, using that sense of nostalgia to lure you into Nova’s own immature mind set. It’s not just simple homage, but a method of making the themes resonate even stronger. There are a few other games out there who have tried pulling a similar trick, but very few have been as close to successful at it as Anodyne 2 is. 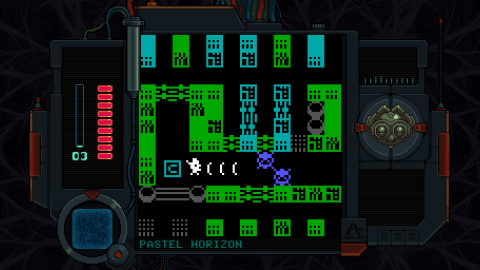 There is literally no game out there quite like Anodyne 2, a joy to explore and experience from start to finish. It’s experimental, but the team’s understanding of design learned from so many other projects is well utilized to keep the game from becoming alienating. Anodyne 2 is one of those games that reminds you of why you fell in love with video games in the first place, capturing a sense of wonder few developers have ever come close to. It’s one for the history books, and definitely not one to sleep on if you’re big into the indie scene.