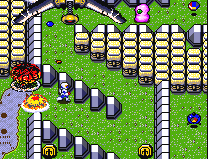 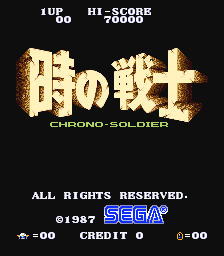 The mid-eighties saw the inception of a genre known as run-and-guns, which were popularized by the likes of Capcom’s Commando and SNK’s Ikari Warriors. At their base, these games were akin to shoot-em-ups, except they didn’t take place in airplanes or starcrafts as was the norm of the time. Most of them did not scroll automatically and allowed the player a bit more breathing room hence, but they still pressured players with lots of bullets and aggressive enemies. Most big companies offered at least one top-down on-foot shooter, Sega naturally included. Their best-known contribution to that front in the eighties was Alien Syndrome, their tribute to the Alien series which involves two soldiers destroying frightening xenomorphs on derelict vessels. It was different from other Commando-likes in that you could move in any direction around the map and didn’t just keep going up like most other such games. 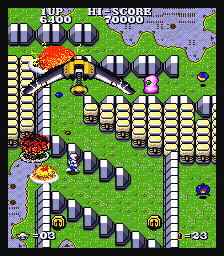 Sega did make a few more “conventional” entries where up was the only way to go, but Toki no Senshi – Chrono Soldier is still fairly original, hence why “conventional” has been put in quotes. Thematically, is a bit like ADK’s Time Soldiers, which takes you through several epochs of time to shoot dinosaurs and WW2 tanks and whatnot.

First off, the reason why Chrono Soldier is most definitely NOT conventional: In a curious twist for the run-and-gun genre, you actually do not have a gun! Nay, your primary method of attack is instead a quick punch which generates a short-range wave of energy. It’s fast and vaporizes most enemies, but it ups the challenge factor simply by requiring you to get close to your foes. Your only reliable method of long-distance assault is a limited quantity of powerful grenades. They always fire straight up as indicated by a cursor, and they do considerable damage to anything that gets caught within its explosive radius.

You start out with seven grenades at the start of the game, and you can pick up grenades hovering above the ground, but your main means of replenishing your stock are by killing other enemies. You earn one grenade for each piece of fodder you vaporize with your wave punch, so it is in your best interest to be a murderous warrior slaying all who stand in your way. Every time you die, you respawn with four extra grenades as a consolation prize. And yes, death is always inevitable in these sorts of games, though your croak animation is rather humorous where your armor is instantly stripped and your guy spins around and falls wearing only a black speedo. 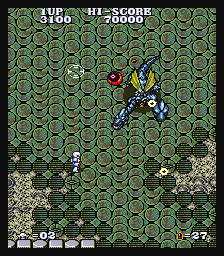 Oncoming enemies are signaled by a flashing green dome, so move your butt if one appears right beneath you. There’s not a lot of variety amongst the mooks, as each level mostly gives you a singular type of enemy that basically acts the same: Move around randomly and shoot at you. Though the type of enemy you face at least changes for each level, so it’s not totally boring. There’s also a special enemy which pops up every now and again that looks like a green protoplasm on a mechanical base. They lob bombs instead of using straight projectiles and cannot be killed by your punches, only by bombs and shields. In the case of the latter, if you find a multicolored polygon floating in the air, grab it to gain a powerful shield which essentially renders you invincible for several seconds. You are unable to punch during this time but can still throw grenades. When shielded, it’s a good idea to run down popcorn enemies before your limit expires, although there is the caveat that you don’t get grenades for shield kills. You can also grab another power-up that increases your character’s speed and yet another that temporarily freezes time.

Each stage ends with a boss, as it the custom with these sorts of games. If you run out of grenades while fighting bosses, you are somewhat screwed. It’s usually best to save most of your explosives for big baddies and only use them on enemies and obstacles in the most necessary of situations. That being said, bosses retain the amount of damage you dealt to them on your last life, making it less stressful to defeat them so long as you are able to continue. There are some neat baddie designs like a gigantic red scorpion and a really disturbing disembodied alien head, but it’s a bit lazy that all bosses attack the same: Move left and right while spraying bullets and bombs. They do become markedly more aggressive for each new stage, at least, though further laziness occurs as the bosses from the first half in the game repeat for the latter half, with eight stages in total. 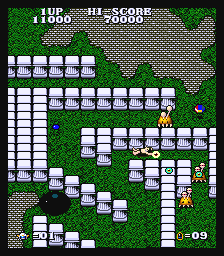 In fact, Chrono Soldier uses up all of its ideas by the third level. The fourth stage’s structure is exactly the same as the first, and then the fifth level immediately re-recycles the same layout. The latter stages also re-use the layouts of the second and third levels, with the only real difference being the actual graphical design of the levels… and even that falls apart as the last three levels use more or less the same tilesets. If a game’s going to have a definitive beginning and end, it’s usually a good idea to provide actual motivation to REACH the end by offering new environments and enemies. In the earlier days of arcade games, this may have been acceptable, but not by 1987.

Chrono Soldier does not adequately fulfill this mark of good game design and comes off as a slapdash product. For those looking at it from a casual standpoint, it’s fun to play for a bit but is ultimately not one of Sega’s more worthwhile products. It never left Japan and it did not receive any ports, so perhaps Sega themselves were disappointed in the final product. Indeed, there’s barely any information on it out there, with no flyers or any other material. While Chrono Soldier does have a few interesting things in its design (the lack of guns and gaining grenades from killing foes), it’s one of many arcade games which disappeared within the mists of its own mediocrity.