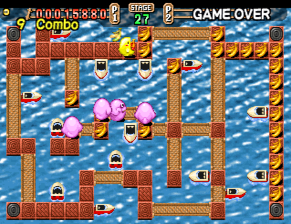 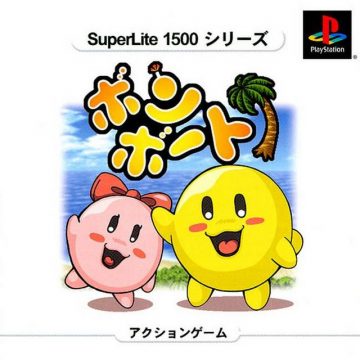 Success Corporation’s “SuperLite 1500” series of games mostly consisted of budget re-releases of their previous games, such as Fantastic Night Dreams: Cotton, but the line would occasionally give way to wholly unique titles. Bomb Boat is one of the standouts of the line in this regard, eschewing the usual expectations of budget releases in exchange for a fairly novel take on the classic maze game formula. Beneath its cute, unassuming box art, Bomb Boat asks an interesting question: “What if you mixed Pac-Man with Bomberman?”

Across 100 visually similar levels, your task is to gobble up all of the fruit while avoiding your ghostly pursuers. If this was all there was to it, Bomb Boat wouldn’t even register amongst its competition in the genre, but your yellow, birdlike blob creature can also place bombs down. Just like in Bomberman, your bombs will go off after a couple of seconds and if you’re caught in the blast radius, you’ll lose a life. While this can be useful for desperate escapes, since ghosts hit by explosions will be momentarily stunned, the real goal is to utilize your bombs to destroy the environment instead. 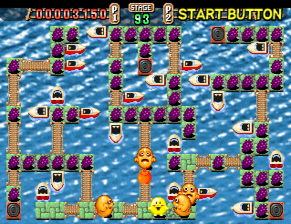 Fitting in with the tropical theme depicted by the game’s presentation, each level takes place on a series of platforms and bridges floating on the water, which gives the player plenty of opportunities to dunk their opponents into the drink. Platforms cannot be destroyed, but bridges can, and anything that was on a bridge as it gets destroyed is removed from play. Ghosts will respawn at specific points after a few seconds, but this trick allows you to get some much needed breathing room at the cost of limiting your movement until the bridge respawns several seconds later. Destroying bridges is also important for scoring, since bridges will bring scoring items in the form of various marine life into play when they regenerate. This mechanic provides room for creativity, allowing players to do things like intentionally trap themselves on an island where they’re safe or guide every ghost to the same location and score big. Bomb Boat has an ebb and flow not unlike Lode Runneror BurgerTime, where skilled players can go from the hunted to the hunter at a moment’s notice.

If you were wondering where the “boat” part of the title comes into play, each stage offers multiple boats placed in various locations. Stepping on a boat will whisk you away to the platform opposite of the boat, facilitating quick escapes when timed correctly. The catch here is that used boats will be destroyed for the remainder of the round, so it’s important to only use them when necessary. This element meshes well with the rest of the game and reinforces the need for players to plan their path carefully while accounting for all of their possible options. 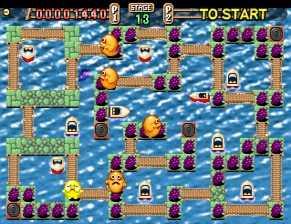 While the ideas of Bomb Boat are executed well, there’s little else to support it within the package as a whole. There’s no variation in the gameplay and most players will likely have their fill before reaching the final stage. The music quickly grates thanks to its use of loud, distracting horns. There’s no story or ending to reward players for their effort and there isn’t anything to unlock either. Because of all this, Bomb Boat feels like a game that missed its true calling as an 80s arcade game you’d stumble upon by chance. Thus, it’s best to treat the game as if it was exactly that – pop a few (metaphorical) quarters in, give it a go, and have some fun until it’s time to move on.