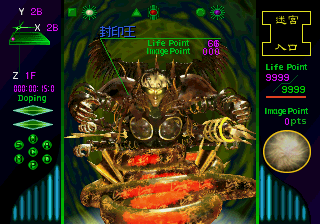 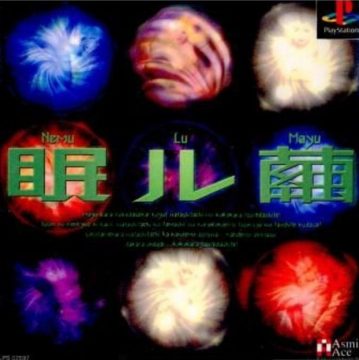 Nemuru Mayu (“Sleeping Cocoon”) tells the story of a demonic tome, hidden in a city in Tuscany, Italy, who has entrapped the souls of four knights. You control another human that has been sucked into the book – and given the default name “The Accursed One” – who must explore the dungeons associated with each the sleeping warriors, so that all can be freed from the demon’s influence. 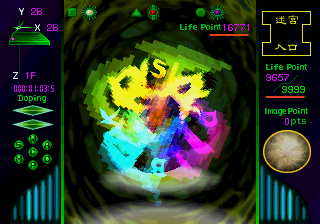 Nemuru Mayu was designed by Yukinori Tokoro, who was mostly known as a photographer, but also had a penchant for surreal art. Indeed, the labyrinths you explore are not “dungeons”, explicitly, but rather termed “dreams”, which should give you an idea as to how uncanny the game feels. The bizarre enemy designs recall the older Shin Megami Tensei titles, though with much improved visuals, offering nearly full screen, animated baddies to fight.

The game is a first person dungeon crawler, similar to Wizardry, though you only control a single player. That being said, it’s certainly not lacking for depth. Each of the four knights has their own set of mazes, 19 floors deep, and associated with an identifying color. Multiply that and add in the 13 levels of Dream Tower, the final dungeon, making for 89 floors total. There are also several hundred items to find and numerous secret events to uncover. Since there was never any official strategy guide released, fans of the game have kept websites open for ages, hoping to uncover everything, and yet it still seems to hold mysteries. Of course, actually exploring these takes a significant amount of time, and it does get quite tedious, seeing how the layouts of all of the main dungeons are all extremely similar. 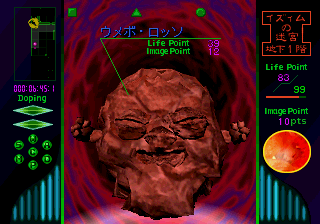 It also has an extremely unique battle system. Enemies are fought one-on-one and are visible when walking around around. When you run into them, you’re transported to a seperate screen, where you’re limited in movement to only forwards and backwards. You can run up to them and bash them with any weapon you’ve found, but alternatively, you can learn and cast magic spells. When you begin an incantation, a rune appears on the screen – as the strokes of an invisible pen trace its shape, you hit marks in a specific rhythm. The more successful your button taps, the stronger the spell. Meanwhile, your opponent is doing the same thing, but you can also reflect their spells back at them. Just as you can pick which of the four knights to free first, you can choose your approach to combat. Combined with the huge number of random item drops and other hidden stuff, it turns the whole game into a unique experience for every player.