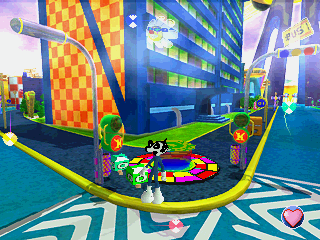 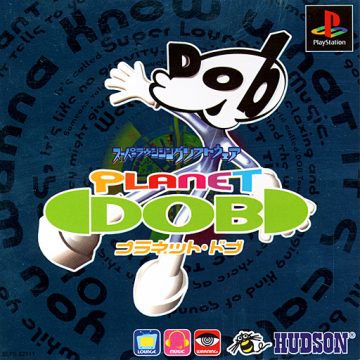 Date of Birth was a Japanese music band that formed in 1985, and continued up through 1999. One of the band members, Kenichi Shigeto, was also a computer graphic artist, and he created a mascot called Dob-kun, whose defining characteristic is a head styled as a word balloon that says “DOB”. As a tie-in with their 1999 album Planet Dob, Hudson released a tie-in PlayStation adventure game of the same title, starring that weird little character…kind of. 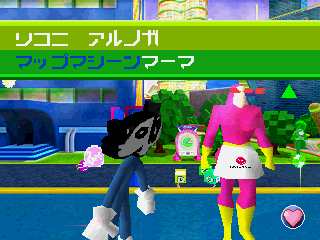 The game begins with Dob-kun, a cosmic policeman flying through outer space, finds himself diverted from his course by some flashy signs. It’s all a trap by some wily scientists led by the evil Dr. X, who captures the unwitting Dob to perform experiments on him. Using a device called the Mindlight, one of the scientists – a humanoid that reads “YOU” in large letters, just in case it wasn’t clear – is injected into Dob’s consciousness to explore it.

After donning a specialized suit, allowing you to take on the form of the titular Dob, you’re free to venture through the many cities that live inside of his head, as well as interacting with its many peculiar denizens. The central CPU that runs everything has had a malfunction, though, so you need to round up 144 “bits” that are running about – these are represented as colored blocks with legs, that need to be captured using various sounds. These will add an instrument track to the area BGM. When you’ve gathered up enough, you can send them to the central CPU, eventually unlocking a “Mixing Hour” mode, allowing you to remix game’s music tracks, which are, of course, from the band’s album. 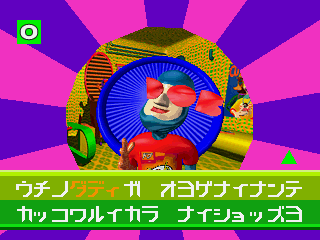 The outdoor segments are played from a third perspective, with 3D characters on CG rendered 2D backgrounds, while the indoor segments are shown from a first person perspective. Besides collecting bits, the other main goal is to find and deliver items from around the areas. Though this is technically an adventure game, there’s not much in the way of puzzles, beyond exploring the environments. The various characters will even give you hints of where you’re supposed to go and what you’re supposed to do. Their dialogue is rendered entirely in katakana, which makes it hard to read, and makes everyone feel like they’re either talking like robots or an old 80s PC game. There’s not much real action, other than avoiding creatures that will try to scare off any bits following you around, and while there are some slapstick segments of Dob-kun, say, getting run over by a car, there’s no real way to die either. There are a handful of mini-games that pop up, like one where you need to balance marbles on a gigantic planet.

As a game, Planed Dob is relatively trivial, as it’s more about the psychadelic experience in being in Dob’s head. It’s a weird, colorful game, with strangely designed characters and bizarre environments, along with a whole lot of prerendered (and unfortunately heavily compressed) computer rendered FMV. It’s a remnant of the 90s era of multimedia experimentation, when a band had the resources to create what’s basically a video game as a concept album.