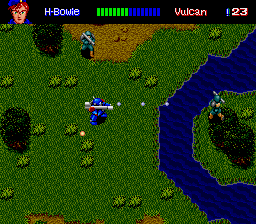 Even though Final Zone was a failure, it still passed on its legacy to two sequels. Final Zone II appeared as a PC Engine CD in March 1990. Apparently Telenet had taken away the franchise from Wolf Team, and relegated it to the internal team Reno, as there are no references to the original studio to be found (nor any credits at all, for that matter). For Final Zone II, the corporate meddling actually seems to have panned out, because the game is actually quite decent. That’s Telenet-decent, mind you, so it’s still no timeless classic and has its fair share of problems

Like many early CD based Japanese games, Final Zone II makes heavy use of animated pixel art cutscenes, including voice acting through all the sequences. In theory that would be a good thing, but the English localized version is no doubt among the top ten worst video game dubs of all time. It’s painfully obvious that no single one of the voice “actors” even gave a damn about their job, so emotionless and devoid of any sense of natural timing are the lines. But one couldn’t really blame them for not caring about a script that is as hamfisted and stupid as the one they had to work with, with its nonsensical lines and phrasings that are cornier than the love story in the Star Wars prequels. It is so ridiculously bad that it adds comedy value to the whole thing. It really has to be heard to be believed how craptacular it all is. Stop whatever you’re currently listen to before starting the below sample; the effect of the scene can only fully play out to the awkward silence in the background.

Rendered down to the fictional facts, the plot isn’t actually that stupid as far as early ’90s anime-style action games go, although the way it’s told leaves more than a few holes, and especially the connections to the first game seem a bit forced (and incomprehensible to those not familiar with it) at times. In the intro, captain (although he’s sometimes referred to as “colonel”) Bowie and his new squad get ready to launch an attack to a remote island from outer space, where they have been ordered to put an end to a rebellion. But the spaceship gets attacked, tearing a huge hole in its hull and sucking all crewmen into empty space. (Why the attack had to be launched from space, by the way, goes completely unexplained, as other characters easily reach the island by more conventional means later.) Good thing they already had their power armor on, so the survivors manage to land on the planet. After fighting against Dakota Bomber, his old pal reveals to Bowie that he was told that they were the rebels. (This is the dialog sampled above.) This leads Bowie to an investigation into a truly wicked conspiracy… 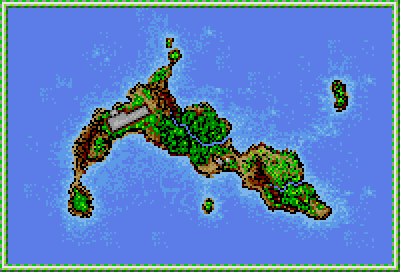 Telenet gave up on the whole squad tactics idea, and instead you only get to choose the character that you’re controlling directly for each mission. For the first three stages the player character is fixed, but as the heroes team up to fight the big bad, the selection grows bigger and bigger.

While the sci-fi elements in Final Zone: Wolf were downplayed for the most part, and the characters fought by foot, they now get to wear special power armor, the New Age Power Suits. (N.A.P. in short. Where the “S” went, no one knows.) Each N.A.P. got a primary and a secondary weapon. The former’s use is unlimited and usually is some rapid firearm, the secondary consumes ammunition and is more devastating but slower.

The hero from the first game is back, but this time, the mission gets personal, as the enemy is after his own hide. His N.A.P. is equipped with a Vulcan machinegun, which has the advantage of enabling him to change shooting directions while standing still. A bazooka is his secondary weapon.

Momoko and Bowie are married, it seems. She has settled down and is first seen trying to prevent Bowie from going on his latest mission, but when her husband(?) goes missing, she follows him to the island. While her weapons of choice used to be “knife and her sextial body,” she now traded them for a grenade launcher and a rifle that’s more powerful than the automatic weapons, but needs the button pressed again for every shot.

The only other survivor from the spaceship, Hanna wears a pink N.A.P. (as does the only other girl in the game, of course!) which carries the same Vulcan as Bowie’s, in addition to a laser with unlimited range. She has no function in the game’s plot whatsoever.

Randy shows up to provide Momoko with the information and power armor to go after Bowie, and also not-quite-so shockingly reveals to her that her brother is alive. His spread shot is the single most effective weapon in the entire game, even though its range is a bit on the short side. This is made up for by his secondary weapon, a missile launcher that works similar to the bazooka wielded by Bowie, but shoots almost over the whole screen.

Izak Velder is Momoko’s brother, who appeared to have been killed towards the end of the first game. Turns out he just had to make everyone believe he was dead to join a super secret special investigation unit. His N.A.P. is equipped with the same laser as Hanna’s, and a light saber made of blue balls, which looks cool in motion and does the fastest damage, but its short range makes its use dangerous.

This mad scientist seeks out revenge against Bowie, who once put him to shame by single-handedly taking out his super weapon during its public final testing run. Ever since, he wanted to see the captain dead, and now he’s driven an entire island to war to pursue this agenda.

Final Zone II is a very typical overhead run-‘n-gun. Other than the first game, enemies have fixed starting positions and numbers, and you can now shoot in 8 directions. There even are different sprites for facing left or right instead of cheaply mirroring them, but as a side effect, almost all weapons are fired off-center, which takes some getting used to. In the third stage Velder takes to a helicopter to reach the island from the main land, a journey that takes the form of a forced scrolling vertical shoot-em-up stage. Like the rest of the game, it’s nothing too special, but a welcome distraction from the main routine.

Power-ups are now visible drops from enemies. The more common ones flip between the letter “B” and “H,” where the former is an ammunition refill for the secondary weapon and the latter replenishes some health. There is also a more rare variant, where the letters are “P” for full recovery and “S” for extending the current character’s health bar for the remainder of the game. Needless to say, the latter has more long time benefits, although “P” might save you in particularly desperate situations. A fully developed health bar is quite big, but there are still ways to die quickly. Normal bullets all cost only one point, but explosives and lasers deal damage for as long as they overlap with the player sprite. In the final level Ruman unleashes his bio mutations, of course, who spit acid that’s even more dangerous. The huge monster at the end is also the most impressive boss fight – otherwise, they range from the usual tanks and airplanes to just extraordinarily persistent foot soldiers. 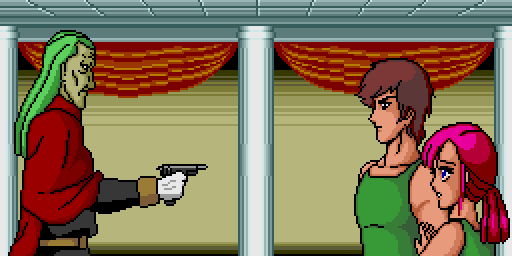 The music could only be a disappointment for Wolf Team fans. The CD medium allowed the inclusion of two ’90s J-pop vocal songs, which are even redubbed in the English version, of course with lyrics as corny as the rest of the script. Much of the other music sounds more like a traditional video game soundtrack, but not coming directly from the chip they synthesizer sound is rather mushy. There are some neat elements, like a surf rock inspired tune, but most of it is pretty bland. Interestingly, there are no stage specific songs, but rather individual themes for the chosen characters.

While certainly better than the first game, sheer mediocrity would have committed Final Zone II to oblivion, if it weren’t for the hilariously terrible English dub. The game remained a PC Engine exclusive and is nowhere to be seen on Nintendo’s Virtual Console. Only the Japanese digital download service Project Egg carries the game as an emulated package for Windows PCs.