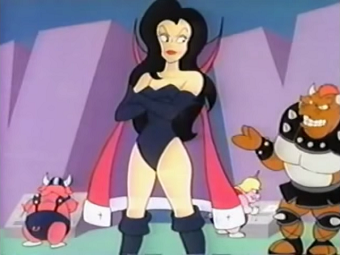 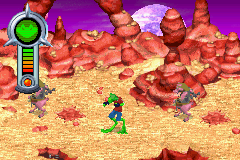 On November 19th. 2011, a previously unknown Battletoads prototype was released on a Rare fan site, revealing that at one time a sequel/remake was being developed for the Game Boy Advance. It is unclear as to when it was being worked on and why it was abandoned: all that is known is that very little of it was done. The glitchy but somewhat playable ROM features a handful of levels selectable through a debug feature. 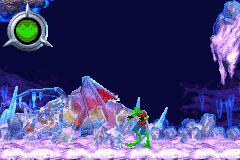 There’s a modern looking version of Ragnarok’s Canyon, complete with walkers and psyko-pigs, and an empty recreation of the Arctic Caverns level, plus several basic placeholder maps. Combat seems like it would have been mostly the same, though the art direction has suffered greatly with generic rendered animation and the lankier, casual-looking Battletoad model. It’s unlikely that much good would have come of this title had the development team kept working on it, but its remains persist for anyone interested to see. 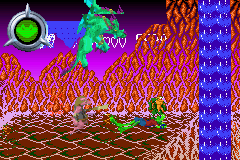 Given the seemingly lawless, intellectually despondant wasteland that is the iOS app market, I’m honestly surprised that nobody came up with this sooner. Elektron Games’ Toad Rider is one of those endless twitch games, but stylized after Battletoads‘ infamous Turbo Tunnel segment. All of the familiar elements are in attendance, as well as some new ones like tubular tunnels and glass barriers you must charge through rather than jump or dodge. All object placement is random and though it ramps pretty gently, the game eventually becomes pretty hectic. The stages are filled with coins that can be collected to “buy” new rides and Toad accessories while your score determines your ability to continue after wiping out, which you increase based on survival time and stunt points. Generally, Toad Rider looks and sounds like most any other Flash title in the style and is every bit as mindless, but might be a worthy diversion for those that couldn’t get enough Turbo Tunnel action from the Rare titles. 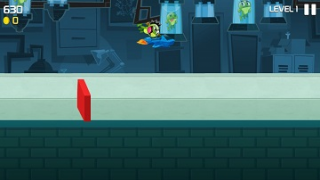 When Battletoads was released for the NES, it was the first ever use of the Battletoads license. As an original IP, a backstory could have been a nice touch to flesh out the characters. Whether intentionally or as a result of time mis-management, neither the game nor its manual made any mention of the Battletoads’ origin. Instead, Nintendo Power was given a comic around the time of the game’s release, written by Rare’s Guy Miller, to explain where the Toads came from and entice readers into checking out the game.

The comic tells the story of three human video game testers working on a mega-budget virtual reality game for their company, Psicone Corporation. In this virtual reality, they play by literally stepping into the shoes of the Battletoads. A jealous co-worker, Silas Volkmire, plots with the Dark Queen, one of the enemies he created for the game, in order to steal some of their thunder. The next time the three plug into the game, they find that they’re now permanently trapped inside as the Battletoads. At this point the Dark Queen reveals that they weren’t actually inside of a game, but that the virtual reality had somehow accessed her dimension and she plans on merging her dimension with the real world in order to rule them both. The comic then shows the Toads fighting through the levels of the NES game.

Confusing? Very. If we take it for granted that all Battletoads games must take place in this alternate dimension, then how do we explain the presence of the Earth in Battletoads & Double Dragon? Even worse, how do we explain the events of Battlemaniacs? It seems to take place in Tibet, so did they somehow escape the dimension to fight for the real world, or is there an alternate version of Earth/Tibet in the virtual world? So when we’re playing Battlemaniacs, we’re playing a video game about video game testers permanently trapped in a virtual game world, wherein a secret facility in virtual Tibet they enter another virtual game world? So what does that mean, that it happened in real life?

Rare probably wasn’t too much concerned with sticking to the canon, so it’s pretty easy to ignore its inconsistencies. And while the comic suffers a bit from corny dialogue, it’s well drawn and showcases a lot of stuff from the main game.

DIC attempted to produce an animated version of Battletoads to capitalize on its relative popularity. A pilot, written by one Dave Wise (no relation to the Rare composer), aired in 1992 but was not considered commercially viable and so the series was never picked up. 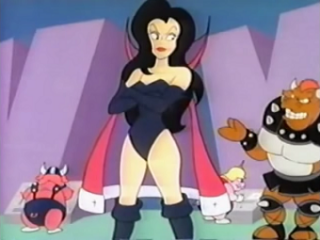 All things considered, this was probably for the better. The Battletoads animated series was of the typical low quality animation and writing that one might expect to see from a licensed game series. The story loosely follows the events of the Nintendo Power comic, but with a few key differences. Now the three humans that became the Toads are typical junior high school losers instead of adults and they can apparently change back and forth between Toad and human forms at will. There are no interdimensional shenanigans either, everything simply takes place far outside of the solar system. The violence is toned down to G-rated Saturday morning material, Professor T. Bird and the original game’s damsel Princess Angelica have greater roles in the plot, and nearly every bit of dialogue is expectedly contrived and embarrassingly 90’s. Seems like so much effort was made into trying to make the Battletoads like the Teenage Mutant Ninja Turtles that they look positively lame by comparison. At the very least, it’s an interesting footnote in the Toads legacy. 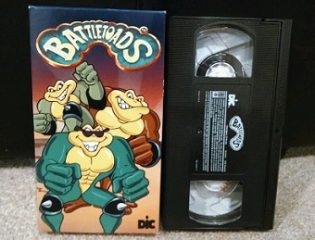 There is a VHS release of the pilot, but it’s not especially common to come across.

The Battletoads appear as a bonus fight in the Xbox One and Windows versions of Shovel Knight. Rash is also a playable character in the Killer Instinct reboot.