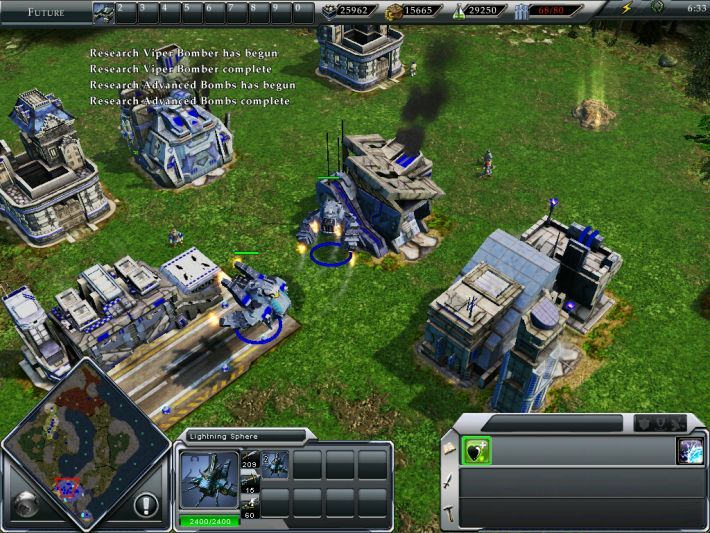 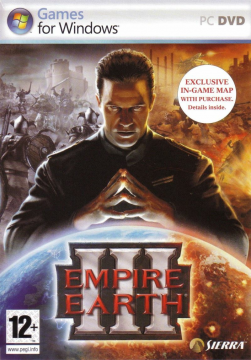 The latter half of the 2000s in certain respects bore witness to several excellent entries in the real-time strategy genre, even as the proverbial “golden age” was coming to an end. Fresh from the relative success of Empire Earth 2, Mad Doc Software and Sierra hoped to leave its mark on history as well through a sequel to that ambitious series. According to lead designer Matthew Nordhaus in a 2007 Gamespot feature piece, the developers not only sought to create their own unique vision from the ground up – as he admitted, the project had “very little, if anything, from the original” as conceived by Rick Goodman and Stainless Steel Interactive – but also sought to do away with a “more is more” mentality that they’d been doing until then. Believing that this and its accompanying complexities did more harm to EE2 than good, they instead opted to go for the opposite. Making everything much more distinct, streamlined and more significantly, simple. This did little to stem growing skepticism and doubts among fans, however, especially as the game’s launch drew near.

Thus, Empire Earth 3 was released for PC on November 6, 2007. To say that gamers and critics alike were stunned in the worst way possible isn’t much of an exaggeration. For in the developers’ efforts to streamline and simplify the franchise, they had somehow mistaken “dumbing down” for “less is more.” Neither would it be beyond the imagination to suggest that this game played a major part in killing off not only the franchise. But also, Mad Doc itself. 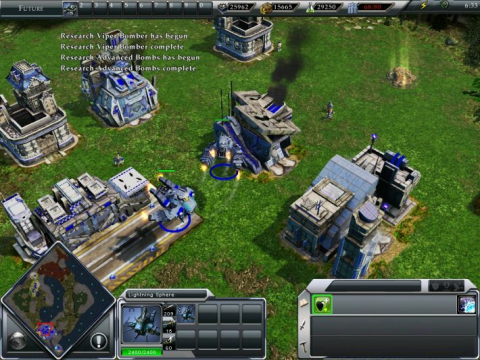 The vast Epochs the game’s predecessors were known for, for instance, have been reduced to a measly five. Previous Empire Earth titles, as reasoned by Nordhaus and Mad Doc Software in the same Gamespot article, were seen as too “overwhelming” and that it was becoming hard to tell one Epoch apart from another, among others. So instead of having mere cosmetic and minor changes through the eons, the game opts for consolidating these into Ancient, Medieval, Colonial, Modern and Future. On paper, this would mean that the transition from one period to another (achieved by hiring “scholars” to gather Tech Points) is much more pronounced, making the jump both riskier and more rewarding. In practice, trying to cram thousands of years of human history into such a small number of eras works about as well as you’d expect. Whether it’s having biplanes alongside jet bombers in the Modern Epoch, or Medieval bases looking like they wouldn’t be out of place in Warcraft III, the resulting strange mesh of caricatures fails to really do the series’ epic scale any justice. Neither do certain details such as Tech Points being used only for “aging up” (without any other prerequisites), as well as the decision to have automatic unit upgrades for some troops and manual ones for others. Thus, not only does it come off overly simplistic but almost as an afterthought.

In place of several distinct civilizations, EE3 also reduces the number of playable sides to three: the “conventional” Western, the mobility-centric Middle Eastern and numbers-heavy Far Eastern factions. Each civilization (intended to be a blend of various cultures) is made out to be very distinct from one another, with their own units, distinct aesthetics, tech trees and abilities. In theory this would be a massive step up, if reminiscent of Blizzard titles like Starcraft. And it’s not too hard to see what the developers were attempting to aim for, such as the ability to build on any territory (a carry-over from EE2) as a Middle Eastern player, which is also meant to reflect Bedouin nomadic societies. Instead, what you’re left with is even more caricatured messes broadly related to their respective sides; seeing the somewhat bland Renaissance Faire trappings of a Western player (particularly by the mid-game), or controlling Middle Eastern camel cavalry with a “camel stench” ability is just the tip of the iceberg. Granted, there are “sub-factions” (such as the Americans and Chinese), as well as a “Civilization Editor.” Though in practice, any differences amount to little more than variations in what units and technologies you start off with (such as having slightly stronger tanks). But not even the futuristic late-game, which has each side evolve under very different lines – be it the standard sci-fi trappings of the West (complete with armies of robotic HERCs), genetic engineering gone rampant for the Far East or the Middle East taking on an almost Mad Max-esque motif – do much to really salvage the dearth in actual variety. 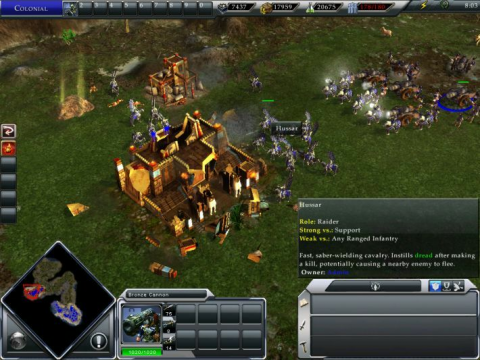 Rather than having a conventional campaign mode, the game features “World Domination.” Reminiscent of Rise of Nations’ “Conquer the World” campaigns, this has you playing as one of the three factions over a turn-based globe and claim dominion over the planet, one province at a time. Defense and assaults, meanwhile take place on real-time battlefields that, on paper, are supposed to be based on where you’re fighting. There are some twists, like being able to conduct diplomacy with rivals, having provinces with different designations (such as commercial provinces that provide added wealth) research faction-wide technologies on the overhead “World Mode” and customize the armies you’re forming. Not to mention, encountering various tribes like the Celts and Inca (which also show up in standard skirmish matches) in battles, which like in EE2 can be either defeated or assimilated; said tribes also provide some degree of variety in mission objectives, be it defeating nomadic warbands or rescuing a princess. In practice, however, it comes off like a hollow imitation at best that gets dragging and repetitive rather quickly; when even the first fight can needlessly last well over an hour due to poor balancing, auto-resolving seem more preferable. Which is made worse by, among other flaws, how the otherwise three-dimensional “World Mode” is non-intuitive and poorly rendered to boot, looking as though it’s half-melted. Rather than being a change of pace as it was evidently intended, it instead makes one long for the futuristic Russian escapades and documentary-esque stylings of the previous titles.

The audio-visual presentation manages to disappoint even further. Although using a substantially modified Gamebryo 2.0 engine, you’d be hard-pressed to consider the graphics an improvement over even the very first title. Dropping nearly any pretense of realism, the game goes for a much more stylized approached, with cartoony proportions, exaggerated animations and vibrant colors. Rather than looking alive and unique, however, you’re treated to units that sometimes glitch in motion, models with lower quality textures than EE2 (despite otherwise greater detail), landmarks popping out inexplicably from the fog of war, and poor framerate consistency even in modern systems; coincidentally, not even the trailers prior to EE3’s launch could hide how choppy it runs, let alone mask an obvious lack of optimization. Which is to a point, a big shame, as some of the designs (especially the futuristic ones) look like they at least had some potential, given better execution and more time. But as appalling as the sights can be, the sounds aren’t any better. Although the opening theme is rousing if bearing no semblance to previous titles, the rest of the tracks – meant to be dynamic, be it peaceful exploration, fighting small raiders or massive battles – are forgettable or are so generic that they fail in being atmospheric. The voice-acting manages to be much worse. As nearly every single line (poorly) spoken by units – whether it’s early-game Western builder moronically saying “Hammer time!” when constructing, selecting an overly enthusiastic Far Eastern peasant or moving a Middle Eastern Revolutionary Guard from one spot to another – is some manner of cringe-inducing, complete with bad accents, outdated stereotypes and failed attempts at humor. Apart from the brief intro cinematic having the most effort put in (especially compared to the seemingly half-finished menu screen), it almost makes you wonder if the developers’ priorities were remotely on track. 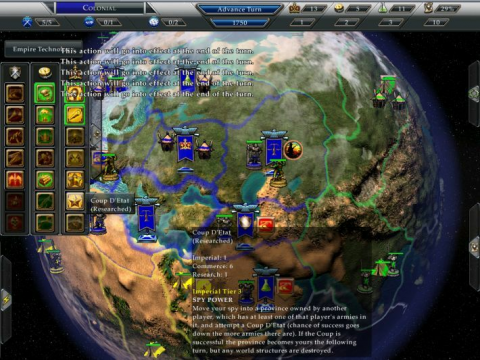 Then, there’s the actual gameplay, which truly drives home how EE3’s failures. Aside from the use of Epochs and a handful of elements derived from EE2 (such as the aforementioned tribes and a simplified territory mechanic), the game has been stripped bare of any real complexity or depth. While there is something of a rock-paper-scissors mechanic present, engagements devolve into very disjointed blobs (rife with janky animations) with little to no real payoff as they hack or shoot each other; some troops bafflingly don’t strike nearby enemies even when attacked. The secondary abilities that each unit has access to (including the aforementioned “camel stench”) are gimmicky at best, and that’s when they work as intended; sometimes, activating those abilities does nothing at all. Resource gathering, meanwhile, involves building Warehouses (which come with workers) close to preset resource spots for gold and raw materials, but is woefully unbalanced and tacked-on. On top of said resource spots never running out, so much raw material is collected that it’s functionally pointless and make any substantial expansion unnecessary, removing any sense of empire-building. Battlefields are also sprinkled with random treasures and capturable neutral buildings (which grants access to special units like Ninjas) that function more like tacked-on knockoffs from Age of Empires III and even Warcraft 3, with little real value. Which isn’t even getting to the pathfinding bugs, uninspired maps, moronic AI even at hard difficulty settings, and a nigh empty multiplayer suite. Not that you would want anyone else to subject themselves to such an experience. As within the first few matches, you not only see all there’s to be had by how dumbed down everything is.

That the game’s reception by games journalists was almost universally negative upon release, in hindsight, was all but expected. More than just garnering a 50% grade on Metacritic and a similarly bad 51% on GamesRankings, critics were scathing in their remarks, whether it’s the overly simplistic gameplay, blatant lack of polish or the atrocious voice acting. It’s not for nothing that German publication GameStar deemed it one of the “10 Most Terrible Sequels” in April 2009, and that even more marginally positive reviews (such as from PC Gamer US and UK) expressed frustration and disappointment. To say nothing of how no expansion pack was ever released.

Among gamers, the game was and remains even more poorly received. Even among long-time fans split over whether the original or its sequel is better, both camps are nigh unanimous in their disdain for EE3. Not only for being an unacceptable excuse on its own “merits.” But also, as far as anyone is concerned, for both making a mockery of and killing off the Empire Earth name. With more than a few wondering just what was Mad Doc Software thinking.

While all references to the game were purged from Mad Doc’s website not long after launch, whether out of damage control or due to embarrassment, the truth may never be fully known. The studio was acquired by Rockstar Games in 2008; now known as Rockstar New England, what’s left of it is known nowadays for assisting in the development of titles such as Red Dead Redemption 2. The franchise itself, meanwhile, was among various IPs acquired by Rebellion Developments, Ltd. in 2009. It remains dormant to this day, though any chances of a revival even amidst renewed interest in RTS titles, are still slim.

And thus, the Empire Earth saga ended. Not with a bang, but an ignoble whimper doomed for obscurity while its erstwhile rivals live on. Perhaps someday it might return like a phoenix, ready to reclaim its glory. For Rick Goodman’s original, ambitious vision deserves far better than a farce.