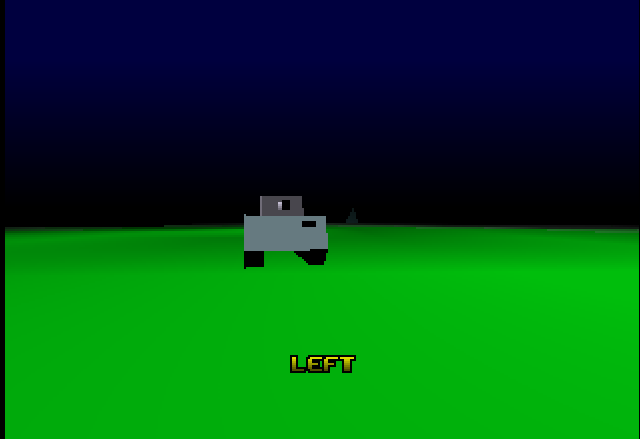 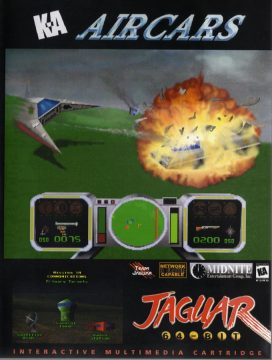 The Atari Jaguar, Atari’s last home console until the arrival of the Atari VCS (previously known as the Ataribox), was never an easy system to develop/port games for it. Some had it easy while others didn’t, which isn’t surprising considering the fact that nearly every title released was coded in assembly. What didn’t helped either was that the system’s powerful but bug-crippled chipset meant that not many third-party devs. managed to really harness its potential to the fullest, opting to rely instead on the M68000 due to its familiarity, but this was a double-edged sword as this meant that various titles on the system’s library, more often than not, looked exactly the same as their 16-bit counterparts. By the end of 1994, the Jaguar managed to host quite a few standout titles such as Alien vs Predator, Iron Soldier, Tempest 2000 and the in-house ports of both Doom and Wolfenstein 3D, while on the flipside it was also host of the choppy and unresponsive mess that is Checkered Flag, the “So Bad Its Good” Club Drive and the well-known Mortal Kombat rip-off Kasumi Ninja, considered by some as one of the worst 2D fighters out there. Sometime in 1994, a relatively unknown third-party developer going by the name of MidNite Entertainment Group Inc. (or MEGI for short), signed in as a developer and started making 3 games for the system. Among them was AirCars, a shooter game where you take the role of a nameless pilot of the government in a hovercar-like craft to destroy an evil organization hell-bent on dominating the world by nuclear means, that was almost released in 199 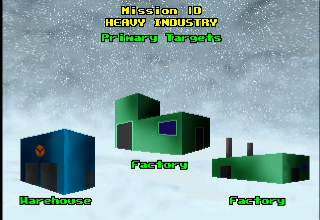 AirCars was in development since the 3rd quarter of 1994 and was completed sometime in 1995 but here’s the kicker: Reviews from video game magazines at the time were not positive and gave the title low score except Next Generation, who gave it a 3 stars out of 5. MidNite was also facing financial troubles at the time as well and combined with a less than favorable response from the press, the game’s release was held up and left unreleased. The Jaguar itself would be discontinued in 1996, which almost meant that AirCars would’ve never seen the light of day. In 1997 ICD Inc., a company better known for making products for computers such as the Amiga, Atari ST, PC and Macintosh stepped in and decided to publish the title as a limited run of an estimated 300 copies, where each copy came bundled inside a box insert with a 20-page black & white manual (with the game’s overlay being printed on the last page). This makes AirCars one of the harder to find titles for the system and it was MidNite’s only fully completed projects. The company’s other 2 titles in the making: Assault: Covert Ops (an arcade-style action strategy title for 2 players) and Dungeon Depths (a 3D fantasy dungeon crawling RPG with support for up to 8 players via network) didn’t move forward beyond conceptual and planning phases respectively.

AirCars is essentially a shooter game with some open world elements, similar to Cybermorph but ground-based and more simplified. The main objective for all 32 missions of the game is to destroy all the primary targets of the area displayed on the mission briefing screen and exit the level by crossing a teleporting gate, with a boss on every 7th mission. While Cybermorph’s gameplay view was in third-person, with the option to change into first-person view via the controller’s keypad, AirCars is in first-person view for the whole game, though then can view their surroundings by pressing 7 (left), 8 & 9 (right) on the keypad, with 8 serving for both back and front views respectively. 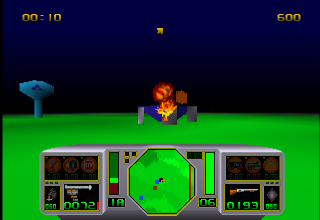 Right at the start of the first mission, your AirCar’s dashboard shows you a number of elements such as stored power-ups collected along the way, weapons, mines, smoke screen, map radar, etc. At the beginning you start with the Auto Cannon on the left and the Auto Shotgun on the right of the AirCar, which can be swapped and assigned for other weapons collected from destroying moving enemies and enemy turrets by pressing 1 (left) & 3 (right) on the keypad, giving the game a bit of strategy when switching for other weapons after your previous one ran out of ammo but these enemies (especially on the higher difficulty) won’t give up without putting a fight. Control-wise, the game feels a bit sitff and delayed compared to Cybermorph but they get the job done nevertheless.

There are two types of power-ups scattered randomly on the level’s map: Immediate power-ups are, as the name suggest, used the moment you pick them up while Savable power-ups are stored for later use by pressing 2 on the keypad. They range from Radar Jamming, Infra-Red Vision, which highlights enemies on the area and Stabilizer to name a few. If your main AirCar gets destroyed by enemy fire, you’re ejected from it, giving you a aerial view to see what hit you, and you’re immediately placed into a new AirCar unit, losing all the weapons and power-ups you collected along the way. The game gives you unlimited lives to continue playing, this means that the only way to truly die is to either soft reset the game or turning off the console. Teleports are also placed in the level and gets you to one gate into another, depending the color with the exception to the rule being the ones colored Grey. These ones are the exit and they’re closed until you destroy every primary target on the level. On every level, a red line is placed at the very edge of the map, preventing you from exploring further.

Graphically, the game looks flat and not intricately detailed in geometry, but they get the job done when it comes to resembling the buildings displayed at the mission briefings, with a bit of texture-mapping on them. Every model for the enemies, ambient objects, and of your AirCars, are basic in their construction but like the buildings, some of them have minimal texture-mapping on them. When moving across the levels, although the draw distance is short, there’s no pop-up and but the terrains use basic colors and don’t vary a lot between levels. There’s also fog applied to mitigate the short draw distance as well but there’s no background, instead, its just an empty void. The framerate is somewhat low for this kind of game but at least is not like the one found on Checkered Flag and especially Supercross 3D, which were absolutely pathetic. 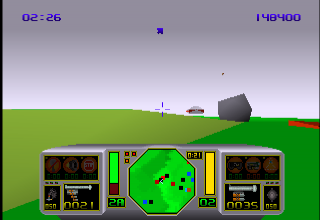 Like Cybermorph, AirCars has only three pieces of music. Unlike the former, however, these pieces don’t last more than five seconds, which is just insane to say the least. There’s no in-game music during gameplay and the music only plays during the intro, mission briefing screens and ending. The sound effects however have this 3D-ish audio design, which allows to hear the gunfire from the enemies from  the distance, which is a nice touch.

One area that the game did received positive comments from the press back in the day was the network multiplayer. By hooking up two Jaguar consoles together via either the JagLink or ICD’s difficult to find CatBox, two players could play in the campaign mode co-op, while hooking up to eight consoles players could participate in a deathmatch mode. Nowdays its difficult to find somebody with a copy of the game to play multiplayer but those who had the luck to do so have reported that the netcode feels more stable than the one found in the Jaguar port of Doom, which crashes on occasions but moreso in co-op.

The plot is that an organization dubbed E.B.N.E.R.S. was established after an nuclear holocaust that occurred in the world, with the main goal of living in peace and with the desire that their work should no longer be used for destructive purposes, while also suggesting that society should be reformed to erradicate any kind of hostility but this was deemed as unrealistic and even laughed upon. The government placed their spies into the organization to follow their activities and later found out about their recent development of teleporters, force fields and the titular AirCars but in the turn of events, this also revealed the real intentions of E.B.N.E.R.S., which is world domination involving the use of nuclear weapons by teleporting them with their technology onto every major capital city in the world and annihilating them in order to submit the remaining humans under their grasp. Reaching the conclusion that the whole organization must be eliminated, a government pilot is sent to get the job done. That’s all the story you’re getting out of the game ‘cause it doesn’t even bother to give you any kind of heads-up in regards to the situation besides the manual. 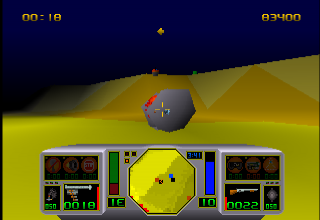 Apparently somebody at ICD didn’t bothered to check out if their release was the final build or not because the version they released was a older but stable build of the game and not the final version. In 2015, a independent publisher named Beta Phase Games, in conjunction with B&C Computervisions, released the final version as KA AirCars. This is the version that was reviewed in both Game Players and GamePro magazine back in 1995 and was submitted to the ESRB for evaluation.

The KA version has a number of differences compared to the ICD version such as a newer and slicker dashboard inside your AirCar, displays your username for single-player, the number of primary targets is now shown at the top of the screen (whereas the ICD version displayed it at the bottom of your shield indicator), new explosion animation for both enemies and building, which in the case of the latter the debris that they leave before collapsing can harm the player, a new title screen, among other differences. This was a limited release of as well, but unlike the original however, it came inside a clamshell package with its own artwork. In 2016, Beta Phase Games released another run of 100 copies of this version.

EGM’s Seanbaby placed AirCars as #13 on his list of the worst games of all time but that statement is debatable. While the game’s 3D graphics are rudimentary and not filled with a ton of textures, the single-player mode is mindless fun and players could find genuine enjoyment out of the multiplayer mode if they can get past behind the low framerate. If you somehow have a copy of the game or can you play it on a emulator, its not a bad title to kill in a afternoon. There are far worse games out there, especially on the Jaguar, but this one is certainly not one of them.

Images of the box scans were outsourced from the following websites: