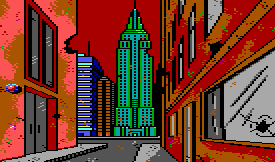 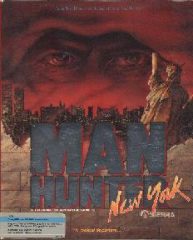 Sierra’s Manhunter series is saddled with an unfortunately generic name – it is not related to the Hannibal Lecter novel or the comic book or any other property – that completely betrays its unique place in the field of adventure gaming. It’s certainly not one of Sierra’s best series, but it does exemplify one of the greatest tragedies of interactive fiction – the developers have created a thoroughly intriguing world, just one that’s massively frustrating to play in. 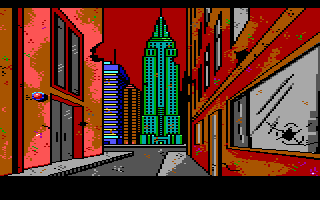 It’s the year 2002 (which must’ve seemed so far away back in 1988) and a mysterious alien race called The Orbs have invaded Earth. The Orbs themselves are nothing but floating eyeballs, but they can interact (i.e. kill) by commanding droids. Humans are allowed to live in the decayed remnants of their civilization, but only by wearing druid-like cloaks. Communication is also completely forbidden, under the penalty of death. In this dreary existence, you play the role of a Manhunter, a detective that works under the Orbs to track down criminals and other insurgents. Both games take place in the real world locations of New York City and San Francisco, each using replications of authentic street maps and featuring recognizable landmarks.

The first game takes place in New York City, specifically Manhattan and Brooklyn. The story is broken up into four days: Each day, you’re ordered to investigate various crimes against both humans and orbs, but there’s an overarching commonality amongst all of the murders. You’ll investigate landmarks like Times Square, Grand Central, Coney Island, Central Park and the Museum of Natural History. The game also ends with you flying a ship over the island, destroying many of its landmarks during your pursuit of the culprit.

Manhunter differs from the typical Sierra titles in a number of ways. A majority of the game takes place from a first person viewpoint, with a third person perspective for cinemas and action sequences. The text parser is gone too, with all actions controlled by a single cursor – the inability to type commands is appropriately metafictional given humanity’s inability to speak. This might seem pretty progressive, but the cursor is controlled by the keyboard or joystick, so in reality it’s very slow. (Some versions of the game support mouse input, but it’s awkwardly implemented.)

The traditional lock-and-key puzzles of most adventure games have mostly been replaced with actual detective work. Each day involves a new crime. Since the orbs can monitor the locations of the humans, your computer will track their exact movements, allowing you to track them down. Their transmitters tend to stop if they’ve either gone underground or have been snuffed out. Apparently the chips aren’t particularly well designed and won’t transmit their identities; hence the need for Manhunters. This same computer also holds a database of every human in the city. Half of the game revolves around investigating crime scenes, using the clues to figure out the names of the perpetrators, running searches on them, and opening up new locations.

Manhunter also has more mazes per capita than your average adventure game: The idea is, you’re supposed to analyze the targets, make a map, and then follow their footsteps. This is really cool, in theory, but it doesn’t always work out in practice. In Manhunter: New York, you need to trek through the Museum of Natural History, which is now apparently a huge maze of identical-looking corridors. It’s technically pretty easy, but the challenge comes from remembering which direction you’re facing, and a single wrong turn means you need to start the whole thing over. It’s even worse when you need to navigate through a minefield (!!) in Central Park: Each screen technically has at least a dozen “exits”, but it’s never really clear what direction you’ll be going in when you click on one. Even though you’ll have properly analyzed your target’s route, it’s immensely frustrating to actually trace it in-game – you’ll find yourself getting blown up a lot.

Sadly, Manhunter thrives on the one thing all adventure gamers hate – arcade sequences. On paper there’s nothing wrong with arcade sequences in these types of games, but the engines are rarely optimized for it, leading to several annoying sections with exceedingly poor control. Manhunter is particularly vicious and unforgiving, overflowing with poorly planned segments that do little but infuriate. In the first game, you need to fight your way, one by one, through an army of punks. You can’t actually walk forward – you can only jump, duck, and punch. You need to dodge a never-ending series of knives (and eventually gunshots), creeping across the screen pixel by pixel, with a single screw-up resulting in death. And you need to do this four times. The only upside is that you can save anywhere in the middle of these; otherwise, they’d be unplayable. The kicker is, once you finish with this segment, you have to find a certain person in the crowd. There’s no clue regarding who’s the right person – you just have to guess. If you guess wrong, you get tossed out of the club and need to fight your way through again.

At least the game’s pretty progressive about its death sequences. Every time you’re killed, you meet the game’s developers – Barry Murry, Dave Murry and Dee Dee Murry – clad in the same cloak as everyone else, giving you some smarmy comment about how you screwed up. These get less and less clever each time you see them (as if they were even clever to begin with), but at least you restart from right before you died, so you don’t need to obsessively save your game every few seconds. But it is possible to find yourself in unwinnable situations if you miss some items, so you’ll still need to keep some bookmarks of your progress.

Manhunter: New York runs on the early Sierra AGI interpreter, meaning super low res 160×200 pixellated graphics with 16 colors. And yet, it’s unquestionably one of the best-looking Sierra games from that era. Most games, even modern ones, define “post apocalyptic” to mean “lots of browns and grays”, but not so in Manhunter. The sky is a permanent red, as is the coloring of its foreboding packaging. When you look at people’s faces, beneath their robes, they’re grey or blue or other another off-putting shade to signify some level of inhumanity. Colors are used in ways that colors shouldn’t be – perhaps a result of the limited color palette, but unique all the same. Everything is either falling apart or has already collapsed upon itself.

The art style plays a careful balancing act between grotesque and comical: There’s certainly a lot of darkly humorous gore, but you’re never sure to be disgusted or amused. There’s some strange humor juxtaposed with grotesque imagery: One moment, you’re looking at the close-up of a bloody, maggot-infested corpse, and the next, you’ve flushed yourself down a public toilet to investigate a sewer system. At the beginning of each new day, an Orb takes an elevator up to your room to give your orders. Exactly why do floating beings need to use elevators, anyway?

The tone of the game world is also completely different from what you’d expect. There’s almost no dialogue, and no real character interaction – you occasionally see your character, although never their face – leaving you isolated from the rest of humanity, if not its world. Altogether, it’s remarkably creepy, and it foreshadows some of the elements used in far more advanced games, like the visual storytelling of Half-Life. It’s just a real shame that the “game” part of this “adventure game” is so terribly implemented.