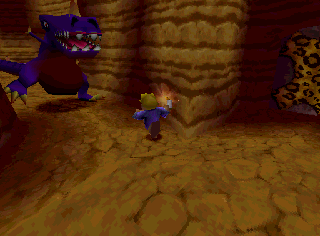 With the release of the Nintendo 64 and PlayStation, the late ’90s saw an influx of 3D platformers. While there were successful new platformers such as Banjo-Kazooie and Crash Bandicoot, a large majority of 3D platformers of this time ended up feeling derivative and uninspired when compared to their peers. Developed by Eurocom and published by GT Interactive; 40 Winks, unfortunately, happens to be one of those games.

The premise of 40 Winks is fairly straightforward. Nitekap, a cranky old man, and his stuffed bear accomplice, Threadbear, have abducted the eponymous Winks and locked them inside dreamworlds. Without the Winks everyone is doomed to suffer through nightmares due to the Hood Winks running amok (small green enemies that pop up from time to time), so it is up to Ruff and Tumble, a brother and sister duo, to rescue the Winks and defeat Nitekap. The story is typical for a platformer in that it gives you a reason to venture through levels collecting things. 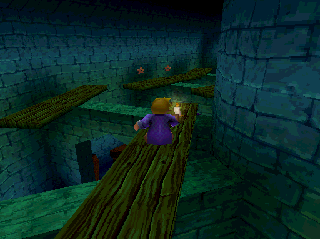 From the outset you choose to play as either Ruff or Tumble. There are only aesthetic differences between the two characters; Ruff fights with a small candle, and Tumble uses a teddy bear. There are some sections of levels that are only accessible to either Ruff or Tumble, but those rooms are few and far between and usually only contain items and powerups. The powerups are temporary transformations which grant Ruff and Tumble new abilities. The caveman, for example, can uncover holes in the ground by slamming certain spots, and the super hero uses a jet pack to increase the character’s jumping ability. In total there are five transformations throughout the game; the caveman, super hero, ninja, jester (exclusive to Ruff), and fairy (exclusive to Tumble).

You begin in Ruff and Tumble’s house, which serves as the hubworld, and enter into the various dreamworlds from their. Inside a dreamworld you find yourself in yet another hub, and can choose to enter one of the three levels in that world. You also have access to a racing mini-game, which gives you a chance to load up on health, but it is not required. Your primary objective in each level is to rescue the Winks hidden within, and collect the Dream Keys that are used to access the world’s boss. Once you collect all of the Winks across the three stages and defeat the boss, a new section of the house becomes accessible and, subsequently, so do more dreamworlds.

40 Winks takes place across six different dreamworlds which all have their own theme. However, it feels as though the developers were simply going down a checklist when designing most of these worlds, as they’re exactly what you’d expect to find in a 3D platformer. You have your typical horror and sci-fi levels, as well as the obligatory underwater world. The stages themselves look nice and usually contain a few unique set pieces, but they’re forgettable overall. While 40 Winks has aged fairly well visually, there isn’t enough in the game to make it stand out. 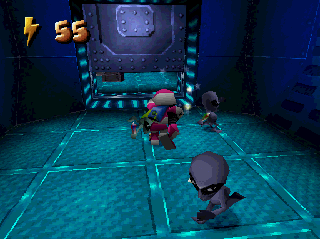 The controls in 40 Winks are its biggest flaw. This is a huge problem with a platformer, as precise jumping and maneuvering is the core of the game. The characters in 40 Winks control stiffly, and feel slower to react compared to enemies. Add in the fact that the camera can also be problematic, especially when in tighter areas, and you have a game that is more of chore to play than it is enjoyable.

40 Winks also has a real problem with its difficulty. The game is very unbalanced. Often times you’ll breeze through a level, only to come to a grinding halt in the next stage due to difficult platforming sections or boss fights. It’s clear that 40 Winks was designed to appeal towards a younger audience, and the fluctuation in difficulty can pose a problem when dealing with younger players. 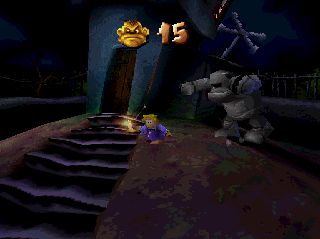 Not everything about 40 Winks is bad, however. The game is very impressive visually, as previously mentioned, and the music sounds good and fits each world very well. There are also FMV scenes scattered throughout 40 Winks that look absolutely fantastic. This, unfortunately, is not enough to save 40 Winks from being a mediocre game, and ends up as a case of style over substance. 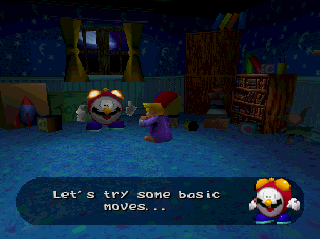 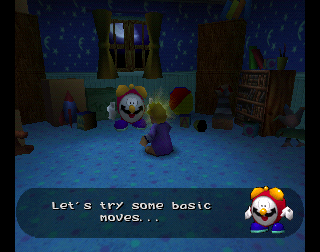 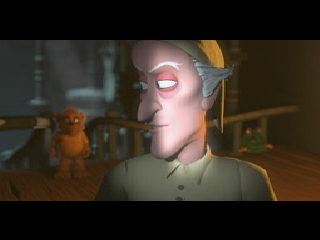 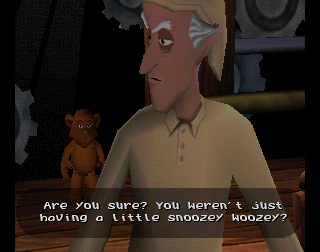