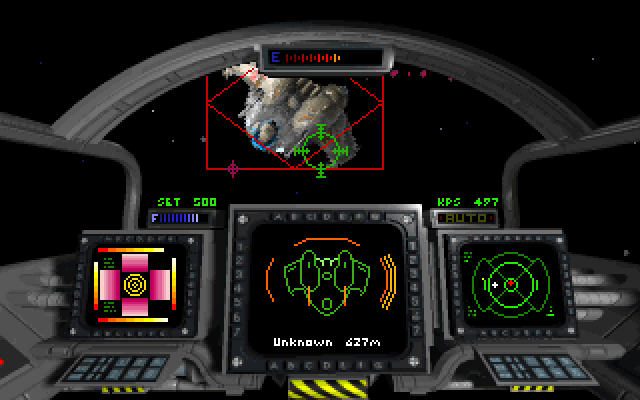 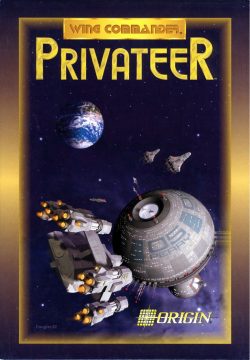 With Wing Commander: Academy, Origin had seen the value in developing smaller games with existing technology in order to recoup the costs from developing their bigger releases. The use of pre-existing engines to build from gave Origin devs the freedom to experiment without being too concerned about reinventing the wheel. The next installment in the Wing Commander main series was still a year or so away when players were treated to the biggest departure from tradition in the series so far, Wing Commander: Privateer.

In Privateer, you control a new character: ‘Brownhair’ aka Grayson Burrows. As the titular ‘privateer’, you eke out a meager living on the far edges of space. You take on combat missions as well as trading and smuggling cargo in the lawless expanse of the Gemini Sector, far from the frontlines of the escalating Terran-Kilrathi War. You can upgrade your ship, travel to over 60 star systems, and fight off pirates, bounty hunters, Kilrathi, and even Confederation forces! It’s a dog-eat-dog galaxy out there, and it’s all yours to explore and take part in.

The success of the original Wing Commander and its continued impact in the PC gaming landscape, with Strike on the horizon, created a lot of excitement in Origin’s entire staff, including its marketing department. While Strike Commander was in development, marketing had the idea to create a trading and commerce simulator, provisionally titled Trade Commander. Chris Roberts was busy leading Strike, but was intrigued enough to brainstorm the concept alongside Joel Manners, also part of the Strike team. The original idea for Trade was to include no battles or piloting, just management. Roberts and Manners quickly connected the dots, thinking it would be an exciting opportunity to explore the seedy underbelly of the Wing Commander universe through a Han Solo-esque protagonist.

Manners was assigned to lead the project, with Erin Roberts, Chris’s brother, as Producer. Chris Roberts remained on the team as Executive Producer. It quickly became clear that RealSpace would not be ready on time for Privateer, so the team opted to use the Origin FX engine. This meant using the tried-and-true method of creating detailed 3D renders, which would be used as the basis for the 2D sprites that appeared in game. While it came out two years later, it’s safe to say Privateer’s graphical fidelity was only slightly superior to Wing Commander II, while still running at 320×200 resolution and 256 colors. But building on such a solid base allowed the team to innovate elsewhere. They focused on fleshing out Privateer’s larger world, with an emphasis on player choice. 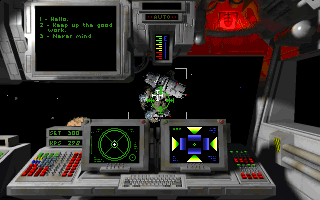 Manners’s team was passionate about this new concept, with ideas for the game’s direction implemented organically to its setting. Retaining the Wing Commander feel was still crucial, especially in ensuring the flight models for the various ships retained the same sweet spot between simulation and arcade action. In occasional breaks from Strike Commander’s punishing schedule, Chris Roberts would turn up late at night in Joel Manners’s office to offer feedback in this area.

Privateer presented the player with an array of possibilities. You could be a simple trader, ferrying goods about. You could take on smuggling missions, trying to outrun militia patrols and fight off pirates. You could become a mercenary, taking out troublemakers for credits… or you could even become one yourself. The main plotline becomes harder to access if you become a wanted criminal, but you can still choose to do so and garner favor with your fellow pirates! Fly too close to the border, and you’ll be tangling with some cats, too. And the Retros, zealous anti-technology cultists ready to gun anyone down, are never too far off.

While you only have a total of four ships to fly, these are no longer stuck with fixed loadouts. You start the game with a feeble, barely-armed Tarsus. This bucket lacks basic features you’d expect in Wing Commander, its sensors show no friend-or-foe color distinction, and there’s no afterburners to speak of. You can’t even jump to other systems, a rare feature introduced in Wing Commander II but a crucial one for navigating the galaxy. 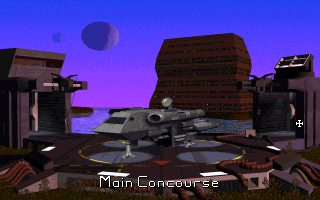 You land in bases and planets, and navigate each location in the same classic Wing Commander style: immersive screens where you click on where you want to go. You can check in with the local barkeep to hear the latest gossip on the grapevine, you can join different guilds, undertake randomized missions, and purchase ships, upgrades, cargo and weapons. And that’s all there for you to peruse at the mining base the game starts you on. But the vistas are many and varied, from the clean-cut agricultural planets to the seedy, Blade Runner-esque, neon-signs-and-hover cars of New Detroit. The Privateer manual, again mostly written in-universe, provided everything from ship descriptions to an interview with a privateer. Illustrations were commissioned in the style of Wing Commander’s manual-magazine, Claw Marks, but these ultimately were left unused.

There are obvious comparisons to be made with space sim classic Elite. In both games you do trading missions, fight off pirates, smuggle goods, and generally try to make your way in an expansive, open world. Privateer did not invent this genre, but rather refined it in classic Origin fashion. The game boasts numerous systems and bases with dozens of characters to interact with, and a cinematic storyline you can embark on, all taking place within the emerging Wing Commander universe. As you progress and make a name for yourself, you get involved in a plotline dealing with artifacts of a long-lost civilization, the Steltek. This soon escalates into deadly incidents involving their ancient superweapons.

Privateer was a hit upon release, with a fanbase that included both Wing veterans and newbies, attracted by the free-flowing game design and cool outlaw aesthetics and mechanics. Fans have gone so far as to create two remakes of the original game in more modern game engines! At the end of the day, Privateer proved that there was more to the Wing Commander universe than the war with the Kilrathi. This was an exciting, growing science-fiction universe. And it would only get bigger from here on out.

The game was released alongside another Speech Pack, which at three floppies couldn’t contain more than a few audio files for comms exchanges. The success of Privateer led it to receive an expansion in early 1994, Righteous Fire. 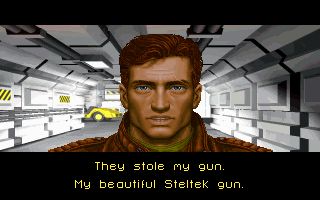 In Righteous Fire, the Retros have managed to steal and copy your advanced Steltek gun, and are being supplied by the Kilrathi to cause chaos in the Confederation. You must use every contact at your disposal to bring them down, whether you’re a pirate, a merchant, or a mercenary. Divided into ‘episodes’ containing multiple missions each, you must find the contacts to start these bits of the plot on your own, unlike the more straightforward plot progression of the base game. Roughly at the halfway point, however, the plot becomes linear again. Nevertheless, you get to keep all your equipment from your Privateer save file, and the same open gameplay is available alongside the story. Some tweaks have been made to existing weapons and systems while adding a few new guns to play with.

It’s hard not to see why Privateer fired up the imaginations of PC gaming enthusiasts in the early ‘90s. The winning formula of immersive game design coupled with an open world was indeed very exciting, but it wouldn’t have been nearly as popular had it not been a refined experience that rewarded exploration and experimentation. The game does, however, have a steep learning curve, throwing you in the deep end and hoping you’ll learn to swim. But the reward for commitment is the opening up of new systems, new opportunities, and new factions. You have to fight for every little bit of progress, every gun you buy, every piece of improved armor plating, and Privateer makes it all feel well-earned.

While no ports of the game or its expansion were created at the time, the traditional deluxe edition would arrive in 1994 on CD-ROM. This edition included Righteous Fire and the Speech Pack, with the latter expanded to cover every single cutscene in the game in the style of Strike Commander. Times were changing, with an increased emphasis on absorbing, cinematic art direction in PC games, so it only made sense.

Wing Commander: Privateer spawned its own sequel, Privateer 2: The Darkening, which ditched the Wing Commander title and took place 100 years in the future. There were even concepts for a TV series with companion games, and abandoned projects like Privateer Online and Privateer 3. These will be covered later in this series.

Wing Commander: Privateer, with everything included in the CD-ROM version, is available for purchase on GOG.com.

NOTE: Most of the fun in Privateer comes from discovering its world. As such, this list of characters is not comprehensive, and is only meant to give you a general idea of the kind of people you will encounter in your adventures.

You are a privateer trying to make ends meet in the Gemini Sector with a battered old Tarsus you inherited from your grandfather. Your ship may not have teeth, but you’re tough as nails and ready to do business. Whether you’re a nefarious pirate, a peaceful merchant, or an efficient mercenary, you will likely get in way over your head, dealing with ancient aliens and assisting the Confederation Navy. You are sometimes referred to as Grayson Burrows, but it’s up to you what people call you. Historical records show a fixer for mercenaries on earth in the 21st century looked remarkably like you. I’m not sure if you’re swell or not, I guess it depends on whether you’re murdering innocents for cargo or not. 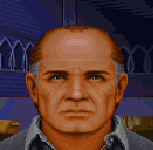 A fixer in New Detroit, Sandoval hires you to ferry cargo for a measly fee, and offers a strange alien artifact as a down payment on your services.

This pirate saves you from being incriminated in a murder, getting you to run illegal goods while keeping the law off your back.

A mob boss who might have information about the rare alien artifact in exchange of your flying some missions for him.

Landing in the Oxford system, you need access to their vast library to research the alien mystery. You’re no student, but Masterson is willing to hire you to fly a few missions in exchange for access.

This fixer is involved in a corporate war in the Palan system that has resulted in a blockade, and is willing to hire you for your services and assist you in getting through the blockade. 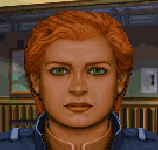 The Confederation may be busy in the border, but they’ve kept up with your movements. Captain Goodin might use this information against you.

This high-ranking officer enlists your help in a desperate gambit to save a Confederate fleet, and help bring the alien mystery to a close.