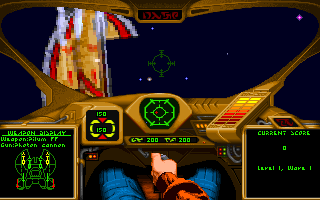 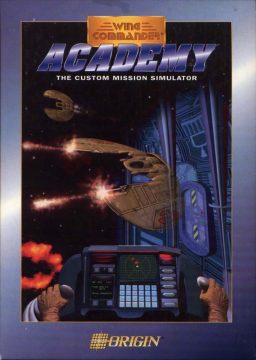 The prolonged development time and high costs of Strike Commander made Origin realize they should stop focusing exclusively on major releases. The bigger Origin titles released at the time retailed for $79.95, before adjusting for inflation. The company felt it was not sustainable to have such a staggered release schedule of very expensive games. So it was decided that smaller titles would help with the company’s cash flow, while at the same time catering to specific demands from their fanbase.

One such commonly-heard demand from the Wing fandom was for a mission creation tool, which had been originally promised to ship with Wing Commander II. Many fans of the series were left hanging when that promise didn’t materialize, so Origin made up for that with Wing Commander: Academy. Not to be confused with the 1996 animated series of the same name, which we will look at later in this series. 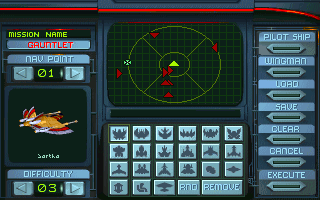 Released at a more modest $49.95, Academy is exactly what it says on the box: a custom mission simulator. Built on the Origin FX engine, it allowed you to create their own missions by setting up enemy and allied fighters at several nav points. The game included all fighters from Wing Commander II, and two brand new ones: the Confederation’s Wraith and the Kilrathi Empire’s Jrathek. Four wingmen were available to join you on missions. Three of these were existing characters (Hobbes, Maniac and Angel) joined by newcomer Lightspeed, the token newbie pilot possibly placed in the game so you could choose a wingman who needed rescuing a lot.

While the game doesn’t contain any of the ‘feelies’ of previous releases, it still managed to fit in a grandiose backstory. You control a former pilot, Colonel Jack A. Lombard. Wounded in combat, you use the simulator to pass on your skills to the next generation of Confed pilots. The game’s manual is another Wing series in-universe affair, presented as a simulator handbook. It includes detailed ship stats, fighter tactic diagrams, and even profiles for the simulated wingmen. This includes newcomer Lightspeed, actually a simulacra of Lombard’s late brother Bryan. Aww.

In terms of features, missions can be loaded and saved, and at 1.5 kilobytes, can easily be loaded onto a floppy to bring to your friend’s house. Fans shared missions in this way, often writing out storylines to match their creations, shared via .txt files. Finally, the game contains a ‘Gauntlet’ mode, for only the most skilled players. You’re presented with an enormous challenge: clear 15 nav points of enemies, only getting your ship refreshed every 3 nav points, and with a ramping up difficulty.

All in all, Wing Commander: Academy was a successful attempt at pleasing the Wing Commander fan base while they waited for the next big title in the series. It is a little limited in what you can actually do, especially since there’s no way to craft an original story for the missions (outside of creating your own supplementary .txt files), but that’s more of a limitation of the space combat genre itself rather than any particular failing of this product. Developed extremely quickly, its staff included veterans of Wing Commander II, and does not seem to have any notable dev anecdotes. Fans of the series would soon enjoy a big Wing Commander game indeed… but perhaps not the one they were expecting.

As a smaller title, Academy did not see any ports at the time. It is currently available for purchase through GOG.com.