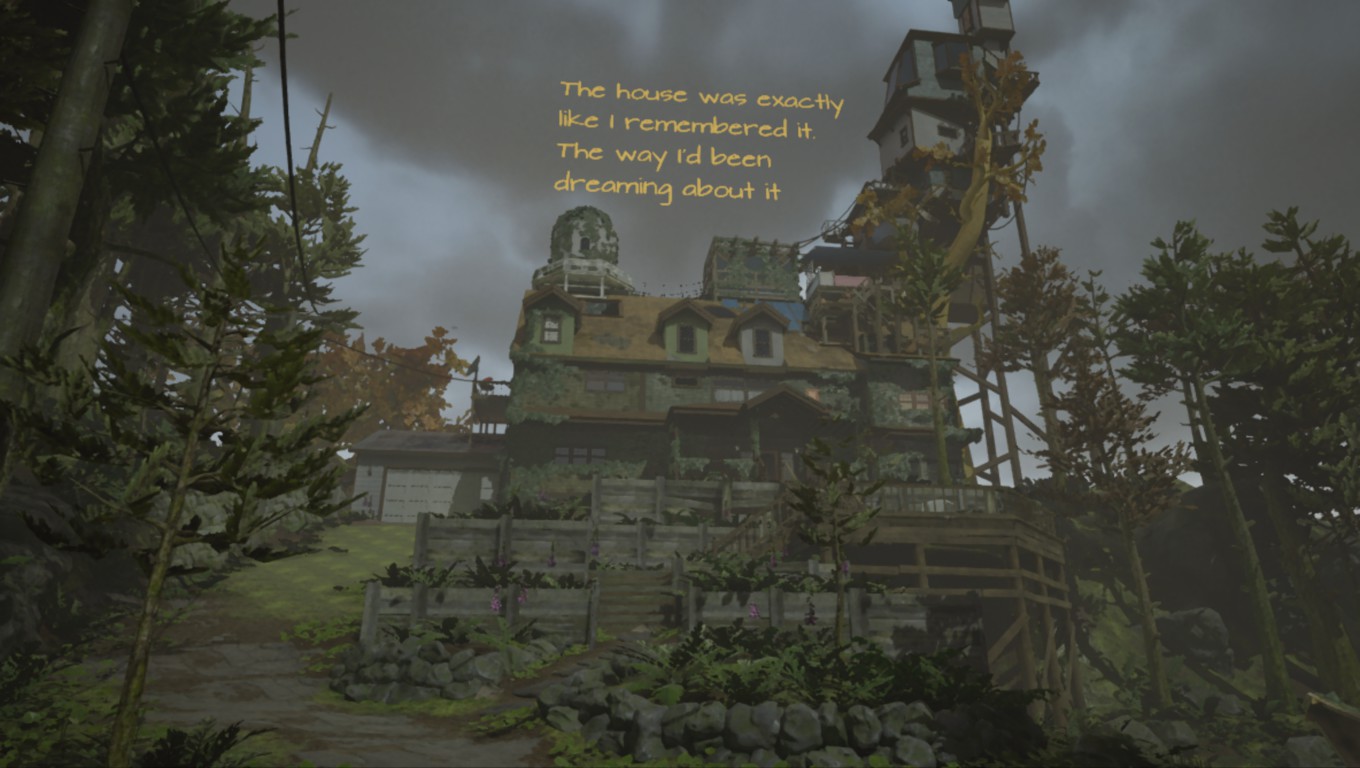 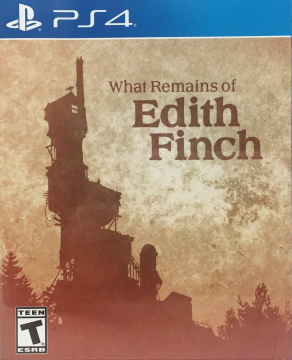 The ‘walking simulator’ subgenre of adventure games (or, as some prefer to call it, the ‘environmental narrative’ subgenre), has always been controversial. For its supporters, it is a sort of minimalistic distillation of storytelling techniques often found in video games (environmental storytelling, audio logs) with all the gameplay conventions cut out for a strict focus on the narrative. For its detractors, it is a cheap way of delivering a predefined, linear story by tacking it onto bare-bones levels in which the only interaction amounts to finding the next audio log trigger if you’re lucky and to pressing W until the game ends if you’re not. A common criticism of the genre is that it’s an attempt to put a square peg into a round hole: to take a story that would be a better fit for a novel or a movie and force it into a vaguely game-like shape without actually utilizing any unique features of video games as a storytelling medium. What Remains of Edith Finch might be a successful attempt at avoiding this pitfall: it’s a walking simulator that, while still linear and devoid of any substantial mechanical or logical challenge, manages to be almost aggressively interactive in how it makes you experience the final moments of its characters – more often than not putting you in their shoes as they take the steps that will, in one way or another, lead to their deaths. 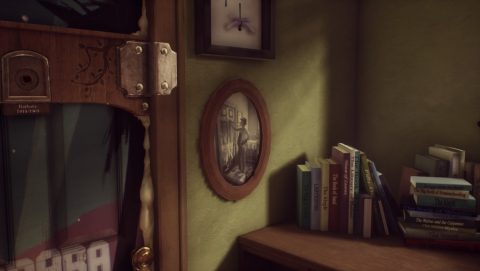 What Remains of Edith Finch is a sort of a twice-nested narrative: you begin the game as an unnamed character reading the diary of an eponymous protagonist, causing the perspective to shift to that of Edith herself as she returns to her old family house, and then as she discovers the story of how each of its inhabitants died, you play through those stories. Edith’s diary plays more or less the way you would expect from the setup – it is an exploration of a house not unlike Gone Home. Stories of other members of Finch family range from similar kind of conventional walking simulator gameplay to simple but thematically relevant minigames with interactivity ranging from as little as using a flipbook to watch an animation to what could be best described as a miniature representation of an evolution of the RPG genre.

The gameplay is, while more creative and involved than in something like Dear Esther, nothing special on its own. Without the narrative context, it’s just a linear walking section occasionally interrupted by a minigame. What makes it shine is its connection to both the events and themes of the game. As the nested stories are told by unreliable narrators all the way down, some of those sections escalate from mundane to supernatural – a little girl who went to sleep without a dinner starts off by looking for food in her room but then transforms into a variety of carnivorous animals, until she turns into a man-eating sea monster… which then crawls under the girl’s bed and prepares to eat her. Even if the cause of a character’s death is obviously mundane (as opposed to just having a possible mundane explanation), it can be told this way – a story of a baby drowning while playing in a bathtub being shown as an imaginary journey into an underwater realm. 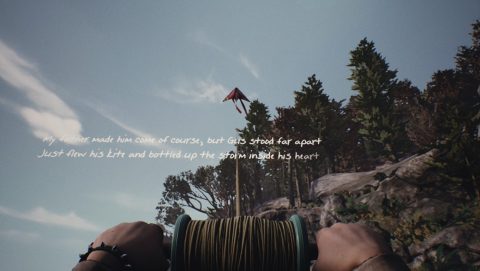 Both the variations in gameplay and unreliability of narration tie into the game’s central theme: it is, at its heart, a story about stories – usually the kind that people tell (and believe) about themselves and others. Thoe stories are found in letters, poems and diary entries that Edith finds around the house, and they’re framed not only by the story of Edith’s diary but also by a tale of the family curse. Most of the Finches – especially Edith’s great-grandmother, also named Edith – believe that they’re destined to die violently, and they interpret everything that happens in this light. We’re never explicitly told whether the curse exists or is it their belief in it (combined with the desire to make their lives less mundane and more interesting – like a story) that causes them to endanger themselves and others, although both possibilities are suggested, and this question forms the basis of the conflict between Edith senior and her granddaughter (and protagonist’s mother) Dawn (who manages to die peacefully – but still prematurely).

Conflict between Dawn and Edith senior forms the core of the story you experience through Edith junior’s diary: as you walk through the deserted house, you look for ways of entering the rooms that were locked by Dawn after Edith turned them into shrines to their dead inhabitants. As new members of the family arrived, the housewas expanded in a haphazard way, as nobody was allowed to move into what used to be someone else’s room. In effect, the chaotic but larger than life structure of the house mirrors the story of the Finches and their (real or imagined) curse.

In its focus on stories, What Remains of Edith Finch is not afraid to reference or quote other works of fiction. The bookshelves in the house are filled with books by authors who have in one way or another influence the game’s plot, themes, structure or style: Jorge Luis Borges, Thomas Pynchon, Mark Danielewski, David Foster Wallace, Lord Dunsany and others. The plot of the game’s most famous level is a retelling of Dunsany’s short story The Coronation of Mr. Thomas Shap (it even lifts several sentences directly from that story): it’s a story of a man who starts imagining a fictional world while bored of his mundane job, gradually loses all interest in reality – culminating in his fictional coronation and simultaneous destruction of his real life. What makes the level stand on its own is, of course, the interactivity: the player has to simultaneously control real Lewis Finch as he prepares fish for canning and fictional Lewis Finch as he explores an ever-evolving world (which, in a way, resembles the evolution of computer RPG trends: from crawling through a monochromatic maze to wandering an isometric world with a a party of followers to creating your own story from branching choices and finally to a fully 3D third-person experience). The game’s central plot is also a literary allusion: it’s a magical realist family saga told without much regard for chronology, with a family curse being an important theme. The similarities to One Hundred Years of Solitude are not coincidental – you might even notice that Edith junior dies a hundred years after Edith senior was born. 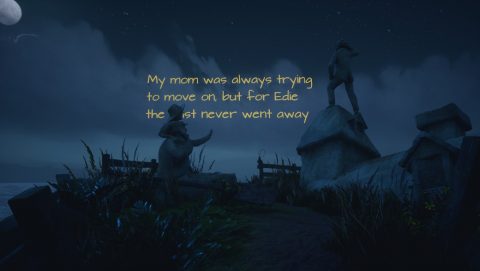 Graphically, the game looks quite good given its low budget. It does have its shortcomings, but it makes up for them with art direction: the architecture of the house and how it reflects on the personalities of its inhabitants, the dramatic shifts in visual style in some of the levels (e.g. a cel-shaded playing area placed within the frames of a comic book) and creative use of typography (words floating or flying through the air and occasionally acting like parts of the environment: clinging to a kite or falling apart under the blows of a sledgehammer). While the game isn’t especially visually memorable, it effectively uses its graphics as means of storytelling. The same can be said about music (courtesy of Jeff Russo, known for his work on TV shows Fargo and Legion) and sound effects, but there’s one exceptional thing about the audio of What Remains of Edith Finch: amazing voice acting, no matter if it’s a dramatic monologue (throughout most of the game), a poetic recitation (in one of the levels) or an intentionally over-the-top horror narration (in the aforementioned comic-book level).

The game is technically without major problems – there just doesn’t seem to be any serious, game-breaking bugs. It does have some performance issues, but they appear mostly in the rare outdoor sections – especially near the beginning of the game.

What Remains of Edith Finch is one of the best game in the walking simulator genre, and it’s an example of how to do this genre right. While its interactivity is limited, it is varied and thematically relevant. It delivers its narrative not just through notes and audio logs but through level design, minigames and changes in its (both visual and narrative) style. It’s a short story collection in a video game form – but it understands and uses the strengths of the medium. It doesn’t hurt that it’s also a really good short story collection – a mysterious, bittersweet family saga (a genre popular in other media but for some reason rarely touched by video games) with more depth and a bigger emotional impact than you could originally expect.